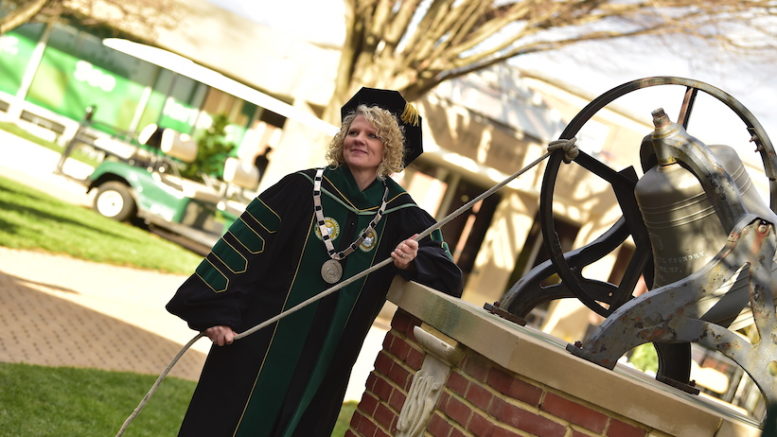 Last week was action-packed on McDaniel’s campus, featuring a wide range of festivities and celebrations, including a Spoken Word performance, McDaniel’s first academic symposium, a fireworks display and much more, all leading up to President Julia Jasken’s inauguration that saturday.

The official installation ceremony was held on April 9 at 3:30 p.m. in Gill Gymnasium, and was attended by faculty, staff, alumni, students, families, community members and distinguished representatives from various colleges and universities.

After the ceremony, Jasken ‘rang in’ the Old Main Bell and celebrated with a reception in Memorial Plaza.

The week kicked off with Jasken throwing the first pitch in honor of NCAA Division III week during the Green Terror baseball game against the Gettysburg Bullets on April 5.

On April 6, the College hosted a reception for representatives from the City of Westminster to celebrate McDaniel’s connection to the city.

McDaniel students and faculty showcased 25 academic lectures and presentations through the inaugural Academic Symposium on April 8. The day ended with a screening of the film “Zootopia” in WMC Alumni Hall and a rainy but vibrant fireworks display overlooking Kenneth R. Gill Stadium.

The week of celebration culminated in the main event on April 9: Jasken’s installation ceremony. Bruce Preston ‘75, chair of the McDaniel College Board of Trustees, presided over the ceremony. The invocation was given by Richard Smith ‘00, Ph.D., associate provost for equity and belonging.

Additionally, Student Government Association President Marnice Briscoe, a senior major from Baltimore, gave well wishes on behalf of the undergraduate student body; along with Raekwon Conaway, a student in the M.S. in Public Administration and Policy program, representing the graduate student body; Terry McAndrew, accountant in Financial Services, representing the McDaniel College staff; and Christianna Leahy, professor of Comparative Politics and chair of the Department of Political Science and International Studies, representing the faculty. The audience also heard a special video message from László Frenyó, dean at McDaniel’s European campus in Budapest, Hungary.

Special music was performed by the Children’s Chorus of Carroll County and the McDaniel College Gospel Choir, and Kathy Mangan, Ph.D.,  read her original poem, “The Hinge,” which she wrote specially for the inauguration.

Ralph Frith ’84, vice chair of the Board of Trustees, then presented Jasken for installation and the Ceremony of Investiture was conducted by Preston, assisted by Frith, former McDaniel presidents Joan Develin Coley, Hon. LL.D. ’10 and Roger Casey, Hon. L.H.D. ’21, Leahy, Browning, and Briscoe, followed shortly by Jasken’s inaugural address.

“McDaniel is truly a place that changes lives. I know this because it has changed mine. I didn’t come to McDaniel expecting to receive the honor of becoming McDaniel’s tenth president, and yet somehow the unexpected trajectory seems appropriate to the moment. [It is] an example of the wide lens of opportunities that become available to those who have developed the habits of mind that lie at the heart of a liberal arts education,” Jasken said in her inaugural address.

After closing remarks from Preston, the two and a half hour ceremony ended with a collective singing of the alma mater.