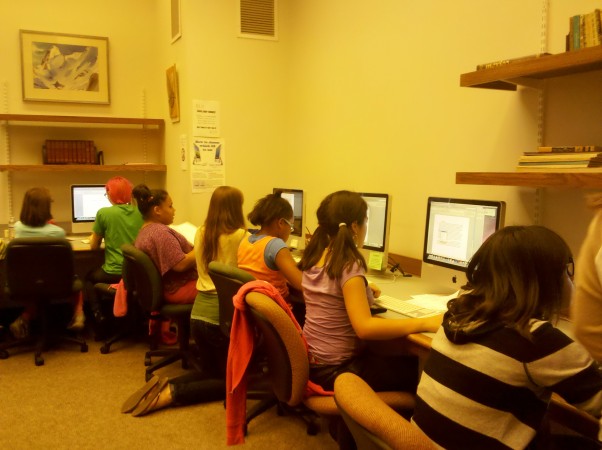 Boys and Girls Club Members in the Writing Center Boys and Girls Club Members in the Writing Center

Over the past 5 weeks, members of the Boys and Girls Club of Westminster have been coming to McDaniel College to work with student consultants on essays they will be given recognition for.

The idea for this partnership between the McDaniel writing center and Boys and Girls Club of Westminster (BGCW) started last year when Lisa Breslin was the writing center director. She had done a program with the students that involved them entering a scholarship contest by writing an essay.

Owen Horton, the current acting director of the writing center, was approached by Beth Tevis, one of the Boys and Girls Club’s Honorary Board members, and they talked about what they could do for the students since there was no scholarship contest that they could point them to this year. The result was a six week program that would allow the BGCW members to work with current McDaniel students on an essay.

In order to recognize these students, Horton came up with the ideas for a “prose-slam,” which is like a poetry slam but has stories being read instead of poetry.

“We wanted to celebrate but also wanted them to sort of have this sense of ownership and performance with it. I also wanted them to have something to work toward like a goal that would keep them interested, motivated, and engaged throughout the process,” said Horton.

“Lisa Breslin approached me saying that they work with BGCW on Wednesdays and asked if I wanted to help out,” said Azat who gladly agreed.

That interaction brought him to continue working with the BGCW and help out with the current program. Azat loves the experience and enjoys that it will help him with his education minor.

The Boys and Girls Club members involved with this partnership come from East and West Middle Schools and are a mixture of 6th, 7th, and 8th graders.

6th grade East Middle school student, Matthew Weller said that he enjoys working with the student consultants on his essay.

“It helps me learn how to set up a story and it’s fun to write and have this experience. It’s also cool to meet older people and get their point of view on things,” said Weller.

The stories the members of the BGCW are writing are about an important or special day in their lives. The titles of the stories have ranged from “The Game Tag,” to “How I Broke My Leg,” and “How I Burnt My Toast.”

West Middle School 6th grader, McKelly Carnes, says that she likes doing the program because it “gives me something to share with others and helps me add detail to make my story sound better.”

The BGCW members will be reading their stories on November 9th in Hill Hall at 4p.m. The event is open to the McDaniel and Westminster communities.

“We are really hoping it is a positive experience, it’s only an hour we have 9 young writers and I think they are really excited to show their stories,” said Horton.