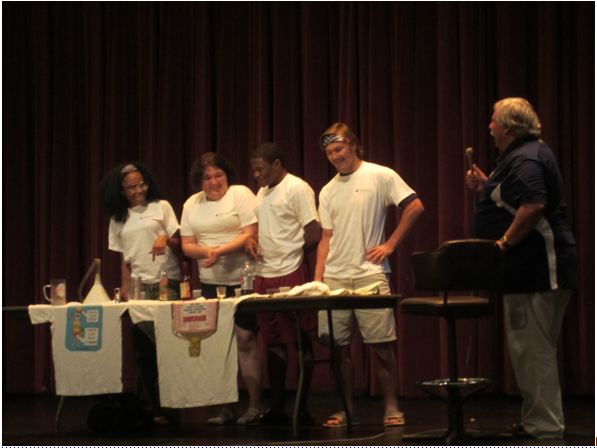 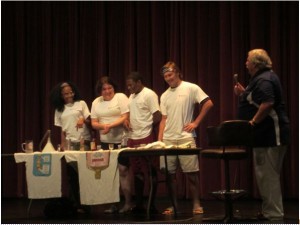 Mike Green is no stranger at McDaniel College, with over 10 years of experience on this campus of his responsible drinking presentation, “Happy Hour with Mike Green.” Both as a former health and physical education teacher and as a bartender, he has traveled to more than 2,000 college campuses for over 20 years as a speaker to stress the importance of alcohol awareness.

He opened his presentation to the Class of 2016 by telling them that he was “not gonna be the one that says don’t drink,” but instead encourage them to make good choices and help one another. Green’s straight-forward delivery combined with humor had the freshmen laughing one moment and listening in silence the next.

One major lesson Green was trying to convey was the one-night problem: a short-term problem that leads to long-term consequences, including bad tattoos, Unidentified Party Injuries, STDs, death, and more. Most of these problems come from getting caught in the moment. To demonstrate this idea, he had four students come to the stage and participate in a chugging contest. The students downed cups of Diet Coke and the contest resulted in one student winner. The three losers were told to kiss each other on the cheek, of which they complied without thinking. None of the students thought to refuse the kiss, demonstrating the power of getting caught in the moment.

Green also taught incoming students the importance of watching out for one another and being “spotters.” In another demonstration, he had volleyball players link arms and sit down on stage, before asking them to try to stand up. United they stood, but when just one person was not working for it, they fell. In social situations, Green urged the students to stick up for one another and be spotters, to have designated drivers, to be aware of hazing, and to hold drinks to their center with a hand for cover.

Green wants students to be drinkers, not drunks, and told the first years, “if you see something, say something.”

Confessions of a Former Freshmen

The Lighter Side: Students do more than study over jan term

Lighter Side of the Campus Safety Blotter