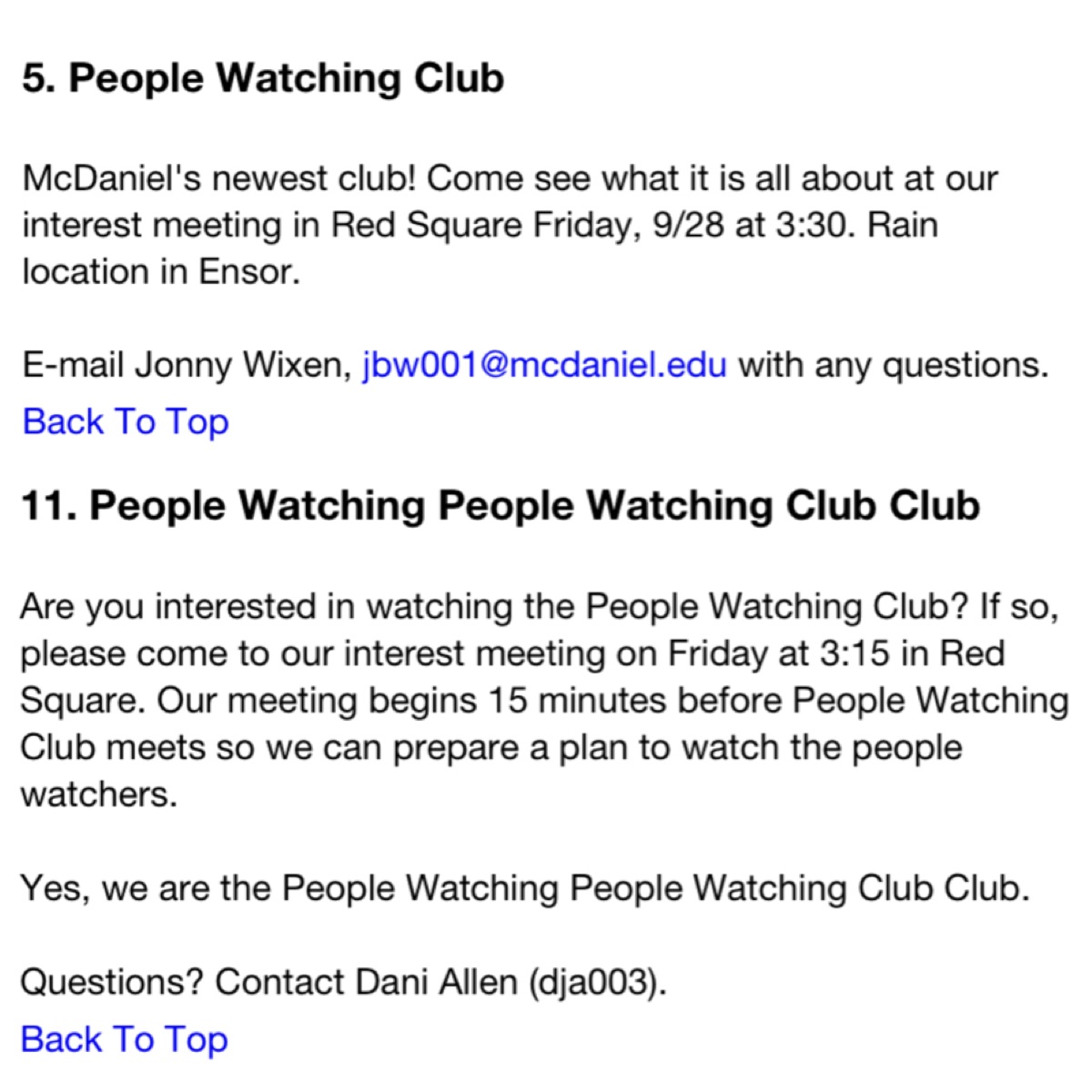 “The People Watching Club is a club for those who enjoy sitting in one place and watching people go by.  One can learn much from watching people go about their busy lives,” reads the mission statement of one of McDaniel’s newest student organizations.

Senior Jonny Wixen, president of the People Watching Club (PWC), explained that the idea for the PWC began as a joke during peer mentor training last year. Within 15 minutes of Wixen volunteering to make the PWC a reality, he had a faculty advisor and enough members to apply for legitimization through the Office of Student Engagement (OSE).

The PWC, which consists of about 30 members, watches the McDaniel community to detect societal trends and themes, such as fashion or interpersonal relationships.

“We haven’t had enough meetings to know what is typical, but I would say that is is fairly laid back, just hangin out with your friends and watching people,” said Wixen.

The PWC has watched two events so far: the Frederick fair with the Honors Club, and the Men’s soccer game on Oct. 6.

“We are not watching individual people, or creeping,” said Wixen. “We just think it is fun to see how people interact with each other.” 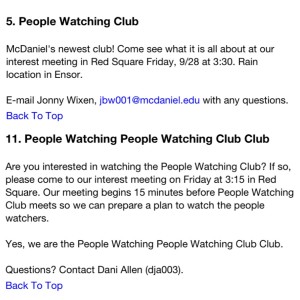 “The PWPWCC is an idea. Our primary activites are thinking and laughing,” explained Allen, the President of the organization. “It’s real in the sense that it has a name, advertising, publicity, and members.”

However, the PWPWCC is not actually a legitimized campus organization.

Jonny Wixen, president of the PWC, does not see a rivalry between the two groups.

“We are an actual club, and as far as I know they are not a recognized club at McDaniel.  If they would like to people watch with us that would be great, but forming a club to watch our club… I think that’s a little weird,” said Wixen.

Allen does not see a rivalry forming either, but rather a partnership.

In response to the claims of weirdness from targeting watching, Allen said:

“When we created PWPWCC we had no intention of being creepy. If we are, in fact, creepy, that’s okay. Creepy isn’t always a bad thing; sometimes creepy is fun.”

One thing everyone can agree on is that the PWPWCC has a confusing name.

“They need to come up with a shorter name.  That’s a bit of a tongue twister,” said Wixen.

Badminton’s Not Just A Backyard Game

Fascination for Numbers: the Beauty of Math Club

Too Cold to Play Outside? Some Indoor Fun Ideas