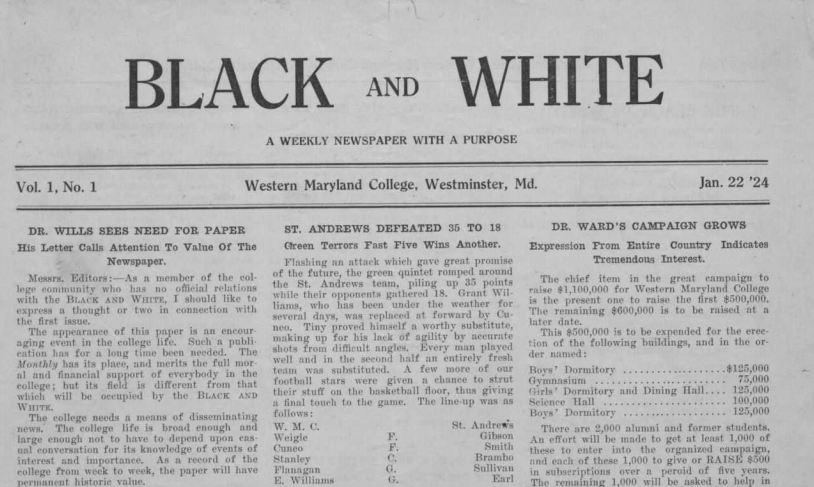 This is the front page of the oldest school newspaper in the online archives, Black and White, from 1924. 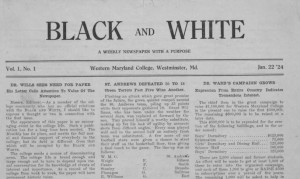 This is the front page of the oldest school newspaper in the online archives, Black and White, from 1924.

Accessible from anywhere, the archives currently contain all student newspaper publications from 1924 to spring 2009, from Black and White, to Scrimshaw, to the McDaniel Free Press, with the remaining issues to follow. Viewers can search a collection of newspapers by academic year, rather than by individual issue.

Hoover Library was able to purchase the same machine used by the Library of Congress at the end of last September with the help of a grant. This machine makes digital archiving simple and with the use of Optical Character Recognition (OCR), the scanned documents are also searchable for individual words.

The process to upload the newspapers began after classes ended and lasted the duration of the summer. In those eight weeks, with student assistance, the newspapers were digitally archived and uploaded online.

“We were getting a minimum of 10 runs a week, some weeks more,” said O’Brien.

The Pathways Yearbooks, once they have been published for at least 10 years, and The Hill magazine can also be found online.

Although the uploaded copies are not the highest quality for preservation purposes, they are fully searchable and stored online as PDFs so viewers can search, enlarge, and use them as research tools. These online archives make researching much easier than microfilms, which were tedious and close to impossible to search. However, the microfilms will continue to exist, and the library will continue to have physical copies as well.

According to O’Brien, the archives were the most visited portion of the library’s site last year, with particular relevancy around the time of class reunions.

“I don’t expect thousands of views but we’re here if someone wants it,” she said.

Words of Wisdom from the Class of 2012