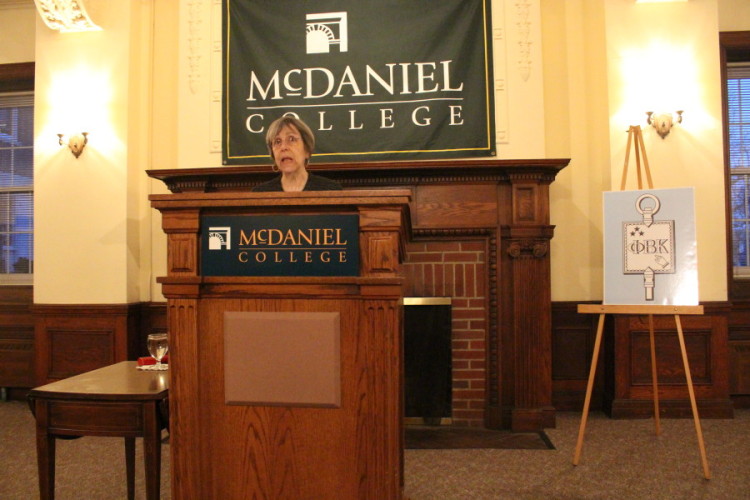 Dr. Bambi Schieffelin spoke about linguistic conventions of the Bosavi people of Papua New Guinea and the contemporary phenomenon of "be + like" in her Mar. 30 Phi Beta Kappa Visiting Scholars lecture.

On Mar. 30, McDaniel students, faculty, and staff enjoyed the company of guest lecturer Dr. Bambi B. Schieffelin. Schieffelin is a linguistic anthropologist at the New York University. Her most extensive research involves the investigation of language in the culture of the people of Bosavi, Papua New Guinea.

The lecture started with a brief presentation of the work that Schieffelin has achieved up to date—including multiple books and articles on the subject of language and culture as well as research on Papua New Guinea.

Once Scheffelin took to the floor, she started with an introduction of the topic: the intentionality of language and how this intentionality changes across languages and cultures. Here, the lecturer spoke briefly about the ongoing research on this field, focusing mainly on the research she had conducted.

In the Bosavi tribe, people are socially conditioned not to speak about others’ internal states of being, unless they heard about that state of being directly from the person or someone else who heard it directly from that person. So, for example, someone in the Bosavi culture who saw me laughing and smiling wouldn’t say, “John’s happy.” He would say, “John is smiling,” or confirm via John that he is in fact happy before making a claim to someone else about John’s internal state of being. Such cultural norms make it difficult to translate the Bible, since the Bible has so much language to describe people’s internal states.

Schieffelin then explained the nuances of language in modern communication and how meaning has changed over the past decades, especially among younger generations. Unlike the Bosavi people, who cannot make surmises about people’s internal states, people in our culture do it all the time. Schieffelin’s example of this is the use of the phrase “to be + like” to indicate shifts between directly and indirectly quoted language.

When someone says, for example, “He was like, ‘Woah! Slow down!’” the hypothetical person quoted in this example might have actually said these words, or the person quoting this person might be exaggerating or performing what he said. Regardless of the words the quoted person actually said, the the person quoting him performs his speech conveys a certain type of information about the utterance.

Schieffelin noted how astonishing that this “be + like” way of introducing someone’s language, either real or hypothetical, has become a part of everyday speech so quickly and has even migrated to text-based online interactions. A study she conducted in 2006 focused on Instant Messaging and how people used “be + like” as well as different fonts and text colors to convey information.

The lecture ended with an open forum where attendees got to ask questions and have conversations with Schieffelin.

Annie Brown contributed to this article.

Travel Writing Across Europe: A Collection of Journals