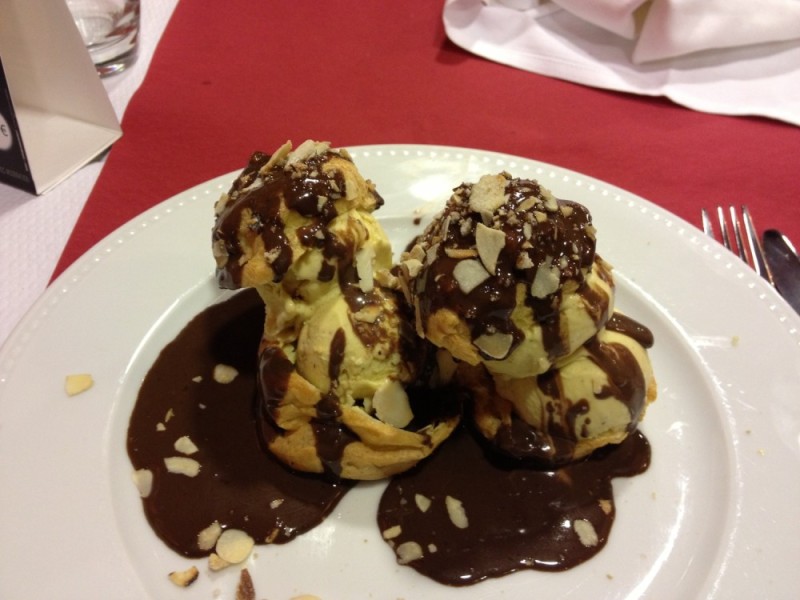 Profiteroles, essentially a chocolate eclair but with ice cream and one of my favorite desserts throughout the trip

More than a week after getting back from my Travel Writing Across Europe Jan Term trip, many of the tasty and unique meals and desserts I ate throughout Europe are still swirling through my mind–everything from the stuff I ate on the go to the things I really got to sit down and savor.

I happen to have an enormous sweet tooth, so I made it one of my missions in Europe to try tons of different desserts while I was there. I was far from disappointed. Here’s a look back at the sweet and sugary things I ate while making my way through France, Austria, and Hungary.

The very first thing I bought in France was a bottle of water and a box of Milka Cake & Choc to settle my stomach before our chicken dinner at the Grand Hotel du Luxembourg in Bayeux. The Cake & Choc, with its moist marble cake, chocolate chips, and chocolate filling put Tastykakes to shame, and with five in a box, I was able to spread them out over the next few days. I also recommend Milka’s Choco Tutti, a chocolate-covered cake treat offered by the Swiss chocolate company. 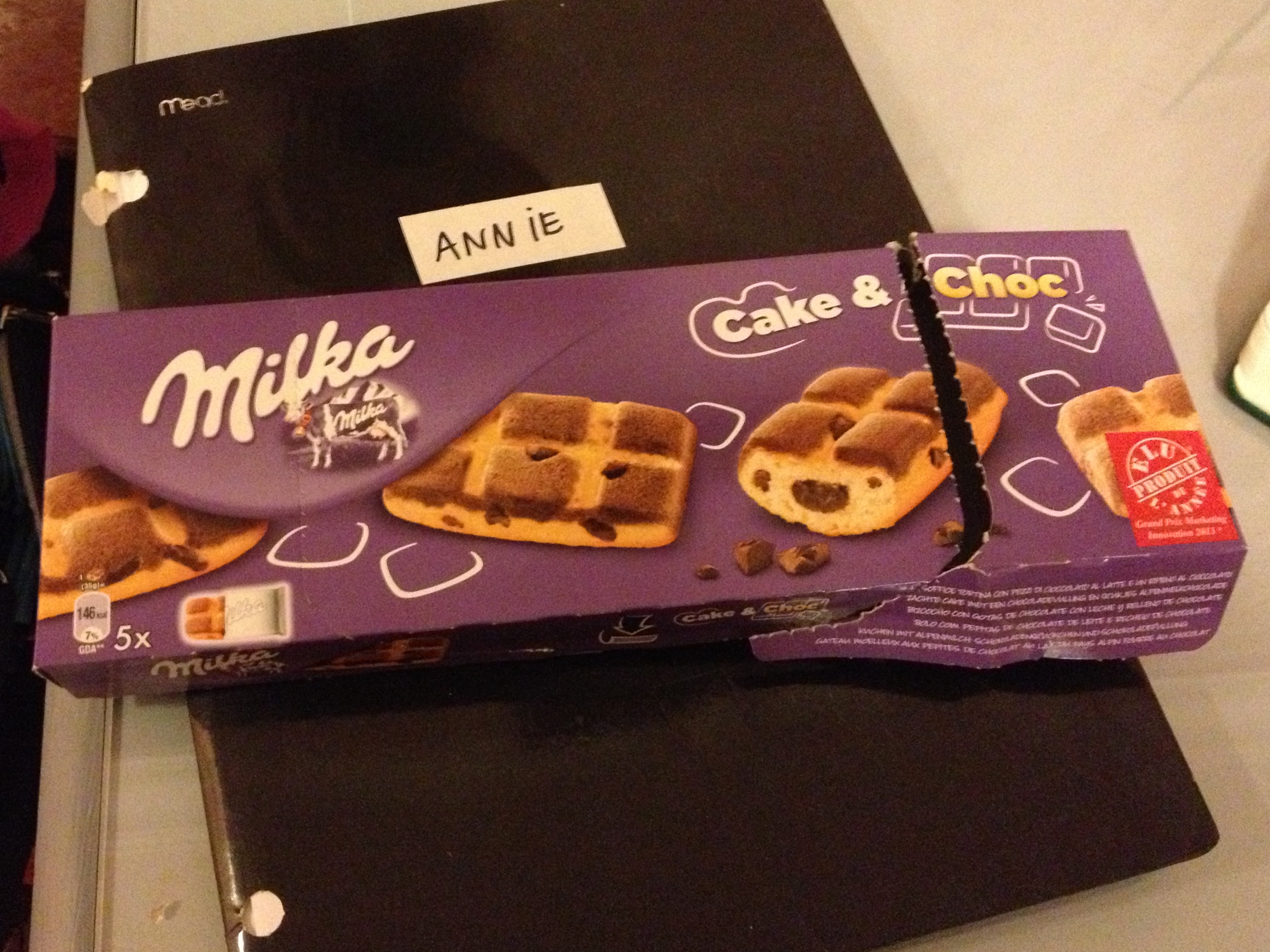 Croissants, in France, are actually breakfast, not dessert, but with the advice of our tour guide Audrey on ways to eat breakfast like the French, I did everything in my power to make my first breakfasts in France sinfully sweet. The French pair their croissants with butter or Nutella and dip them in tea, coffee, or hot chocolate. A chocolate lover, I chose the most chocolatey of those options, dipping my croissant, which I filled with Nutella, into hot chocolate, which I accidentally made with water instead of milk, a not-so-great-tasting French no-no. Even though I didn’t get the hot chocolate right until the second day of the trip, the croissants in Bayeux were my favorite, as they were soft and buttery on the inside and salty on the outside, almost like a pretzel. If I lived in France, I would have to try very hard to not make this sort of breakfast a daily occurrence.

I had no clue what profiteroles were (or how to say “profiteroles”) when I ordered them for dessert in one of Bayeux’s three restaurants, but knowing that it had something to do with chocolate sauce and ice cream, I was hopeful that they were for me. I was not disappointed when the waiter came out with my dish–two cream puffs minus the cream and filled with a dark, vanilla ice cream, topped with chocolate sauce and almonds. This ice cream confection ended up being one of my favorite desserts of my trip–through I still don’t know how to pronounce profiteroles. 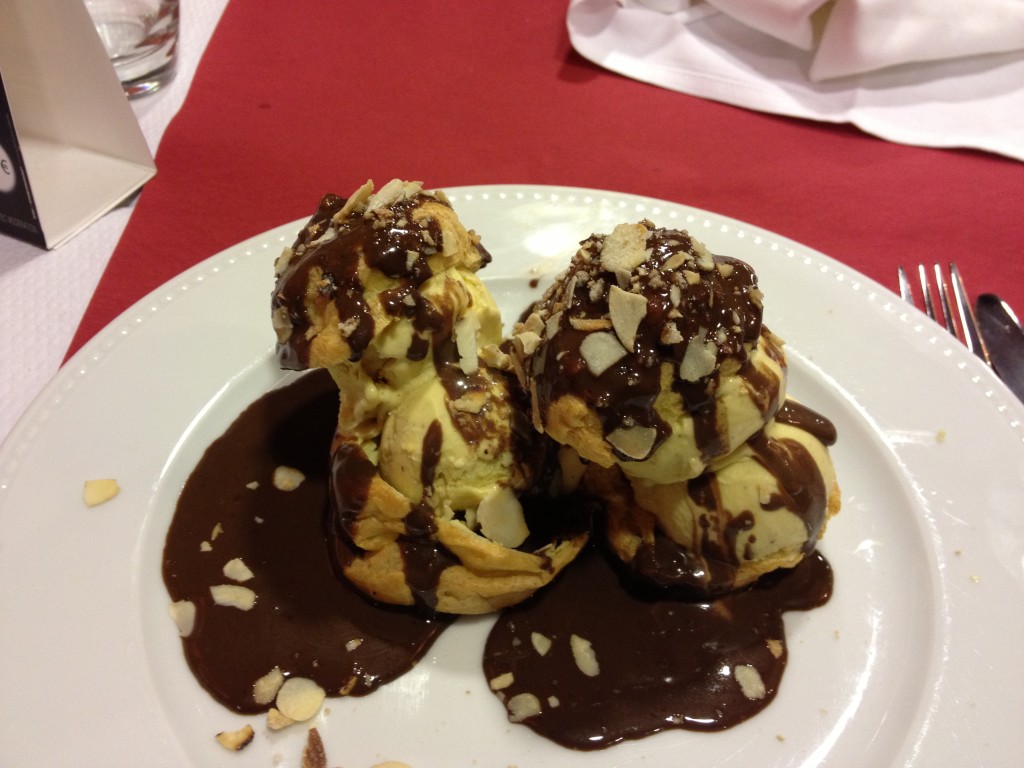 Profiteroles, essentially a chocolate eclair but with ice cream and one of my favorite desserts throughout the trip

A lot of my goals for my trip to Europe were food-oriented. One of those goals was the drink as many local coffee confections as possible without hitting up Starbucks, which is all-too-accessible at home. You can find a Starbucks at the mall adjacent to the Louvre, but you can also find a Segafredo, an Italian-based espresso chain. While they had plenty of sugary iced coffee beverages to choose from, several hours roaming the Louvre had left me exhausted and yearning for a hot drink, so I opted for the Nutellino. Served with whipped cream and a generous spoonful of Nutella, it seemed like an Annie-friendly way of trying espresso outside of a latte for the first time. While bitter at first, the Nutella soon stirred in to make the small beverage a sweet and tasty companion to the macaron I had purchased elsewhere in the food court.

I have the good fortune of having been exposed to crepes long before my trip to France. Having tried my first crepe in Quebec City in 2008, I’ve considered myself a dessert crepe connoisseur ever since, and I’ve learned that every place does crepes a little differently. Our whole class went a crepe place in Paris close to our hotel for dessert on our first night in Paris and there was little disappointment. Most of those of us who ordered got some form of crepe with Nutella, with available variations including Nutella and banana and Nutella and coconut (a combination I hadn’t encountered before). I ordered a Nutella crepe with whipped cream, and while this place’s crepes weren’t made to look pretty, they were made to satisfy, being some of the biggest crepes I’d ever seen. What a delicious way to end an evening! 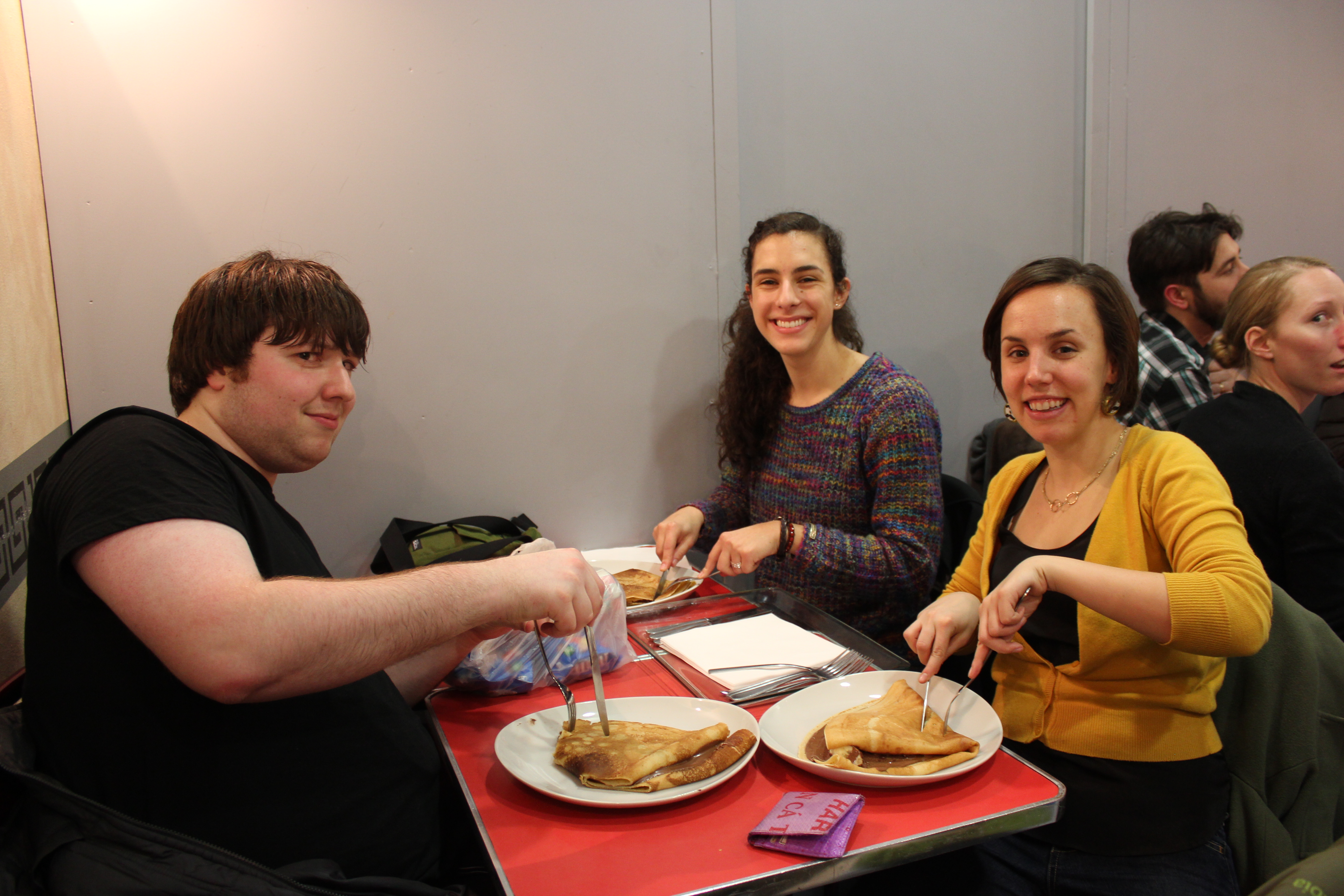 Sachertorte, along with strudel, is one of two desserts you’re required to try when you go to Vienna. (You’re also required to try Wiener schnitzel, but while delicious, as a breaded veal dish, it’s not dessert.) A chocolate torte with a thin layer of apricot jam, Sachertorte was invented by Austrian culinary apprentice Franz Sacher, who was only 16 when he created it.¹ I normally shy away from chocolate cake that has fruity filling in it, but I couldn’t pass up the chance to try this Viennese delight. The apricot jam was not overpowering and I thought it went well with the chocolate of the cake. Paired with a Melange, a frothy Viennese coffee drink similar to cappuccino, I was, for an extended moment, in Austrian heaven. 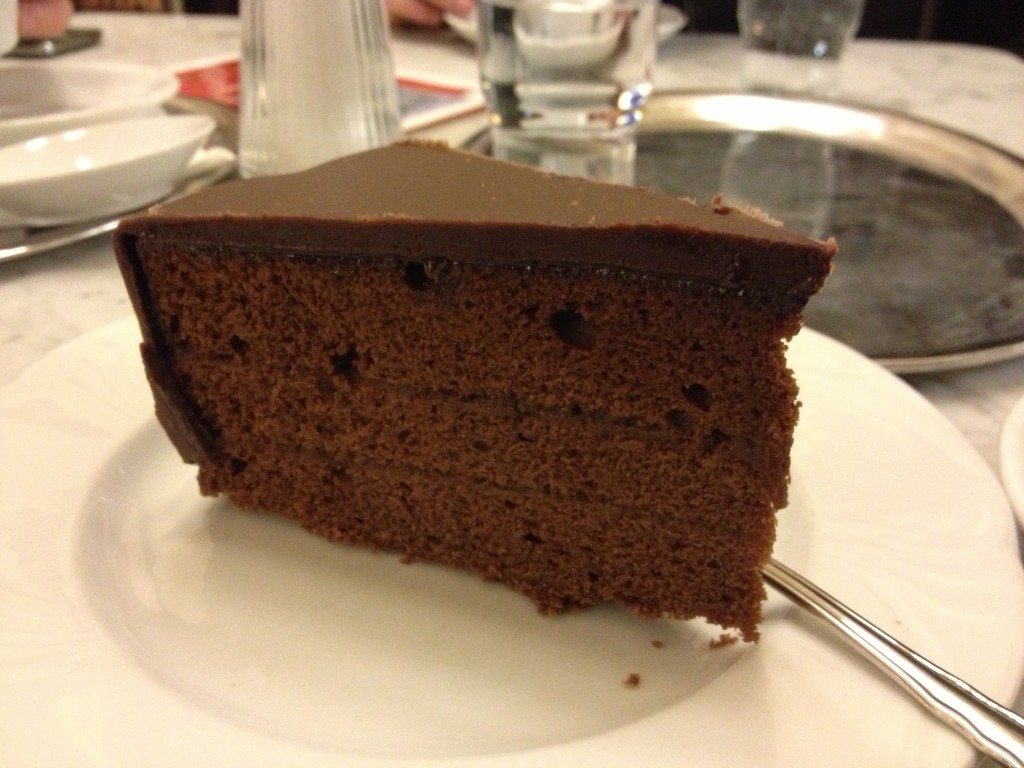 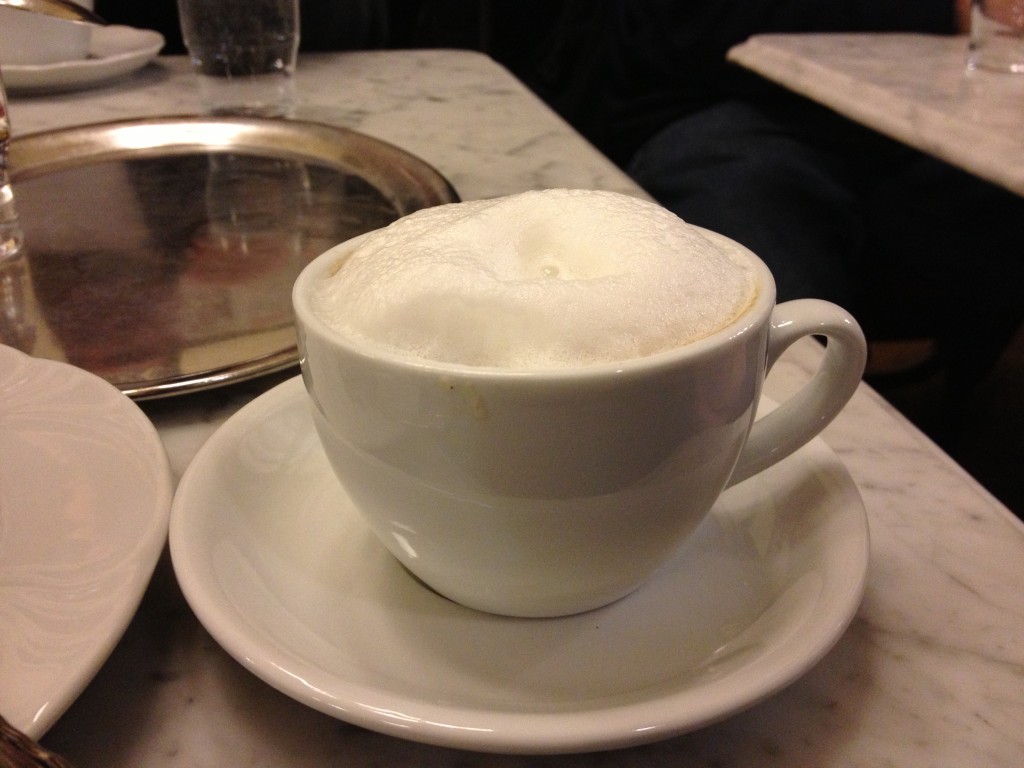 A frothy cup of Melange, perfect for a cold, foggy afternoon in Vienna

Strudel is one European pastry I live for, particularly if it’s apple strudel. In Vienna, I got to try the real deal: a hot, flaky pastry filled apples baked inside and topped with powdered sugar. Savoring it with hot cocoa made it even better, and the two combined made for a perfect last night of culinary adventures in Vienna.

Gundel palacsinta, known in English as a Gundel pancake, is a Hungarian crepe-like dessert which I have since found out is made with a filling of ground walnuts, raisins, and rum. My first dessert in Budapest, this was least favorite dessert throughout my trip to Europe; the then-unidentifiable filling tasted of an uncooked Lipton noodle soup packet. However, the thick dark chocolate sauce it was smothered in was bitter yet tasty. I wish I had had my camera ready when the dish came out to me, because I was in for a surprise: Gundel pancakes are often flambeed and mine, with its small blue flame, was no exception.

Milkshakes, of course, are something you can get anywhere. But if you find yourself in Budapest craving a milkshake, go to SUGAR!, a Budapest candy, pastry, and gelato store with two locations. I was wary of going here at first since I thought it would be like IT’SUGAR, the U.S. based candy store chain, and while it was definitely similar in its colorfulness, I knew I needed to be at SUGAR! once I saw the menu. With so many creative options for milkshakes, sundaes, smoothies, cakes, and other pastries, I had a difficult time deciding what to order in the upstairs cafe. Eventually, I settled on a shake with chocolate and cookie flavored gelato, chocolate syrup, whipped cream, and a cookie on top. Served with not one but two colorful straws, this creamy milkshake was gone before I knew it. 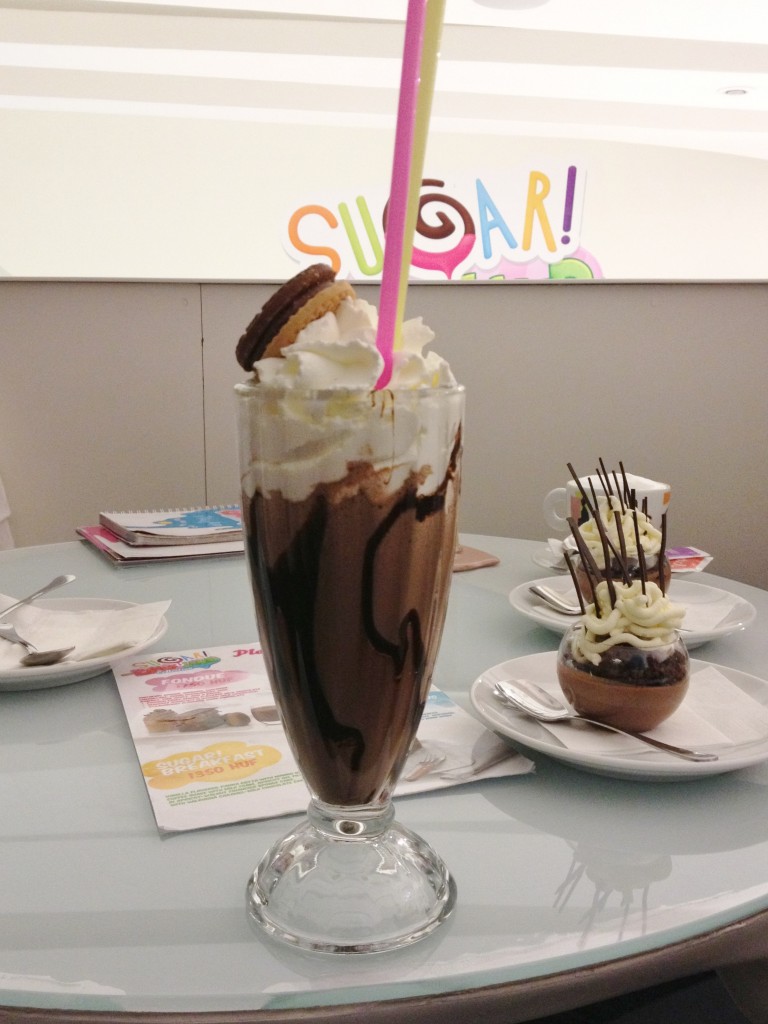 SUGAR!’s milkshakes bring all the McDaniel students to the yard. (And check out those neat chocolate balls in the background!)

I did an excellent job indulging my sweet tooth while in Europe, trying European renditions of my favorite desserts and discovering new desserts along the way. Someday, I hope to get to eat some of these treats in Europe again, but for now, I guess I can take satisfaction in the fact that it’s Girl Scout cookie season!