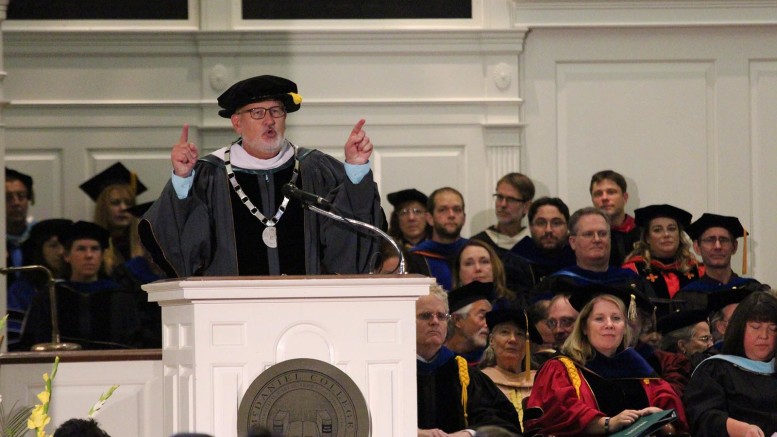 McDaniel College President Roger Casey is looking forward to significant transformations that multiple areas of the institution will see beginning this school year.

These sweeping changes include updates to the school’s brand, international curriculum, and community involvement initiatives. Casey is optimistic about the potential these changes have to bring growth to the school.

One of the more noticeable updates that Casey is eager to see the impact of is the shift in the school’s image: green and yellow banners that carry phrases such as “Fear the Green Terror” and “What will you see from the top of the Hill?” have been added to lamp posts across campus.

“I’m looking forward to seeing what the results of our campaign with our marketing will be, because [the Class of 2022] will be the first class we’ve tried to recruit with the new messages,” the president said of this rebranding initiative.

These new messages aim to show off the College’s identity more pointedly than before, as well as to establish a brand tailored to the characteristics of the school – hence the metaphors around climbing and hills, which intend to represent the diverse opportunities for personal and professional growth that the school touts. Casey said he believed it is important for students to see these messages no matter their location on campus; banners with the new phrases are now scattered across McDaniel.

“I think it’s really important in terms of building a sense of camaraderie, or esprit de corps, a love for the institution,” said Casey.

Also speaking of the Class of 2022, President Casey said he is pleased with the new McDaniel Commitment. The incoming class is the first to come in under the recently developed program that focuses on getting McDaniel students involved with the Westminster community.

An integral part of the McDaniel Commitment is McDaniel Local, a summer program in which a high percentage of the new class met local leaders, visited downtown Westminster, and took part in environmental activities at Singleton-Mathews farm, a large piece of land owned by the College a few miles from campus.

“I think that’s going to make a big difference for many of these students just in terms of their comfort level with where we are,” Casey said. “Lots of our students come from places that don’t look or feel anything like Westminster, Maryland.”

Beyond Westminster, however, Casey is looking forward to big changes on the school’s Budapest, Hungary campus. This year, the College will open its Budapest campus to other American university students, including a group from nearby Gettysburg College.

The Budapest campus, which will celebrate its twenty-fifth anniversary in 2019, will also begin instruction of its Crossroads of Europe curriculum, which includes classes tailored specifically to Central European culture, such as courses on migration or European history, that fulfill general education requirements.

Another international plan the school has in the works this year is a partnership with Anhui University in Wuhu, China: starting this fall, a cohort of Chinese kinesiology students will begin their first two years of college at Anhui, then come to McDaniel to finish their studies.

Another change in the kinesiology department is the Gill Center renovation.

“Our faculty in that area, our phenomenal researchers – they do all this undergraduate research work,” Casey said of the largest major on campus. “They didn’t have the appropriate space to be able to do that.”

“It’s spectacular,” he said. “It has transformed now into what’s hands-down the top-notch facility on campus.”

The Gill Center revamp, along with the rest of the extensive changes the College is beginning to see, is one of the many changes that greet the new class.

Casey said he is excited to see the Class of 2022 mature on campus as they transform into confident college students.

“I love watching that happen every year,” he said.