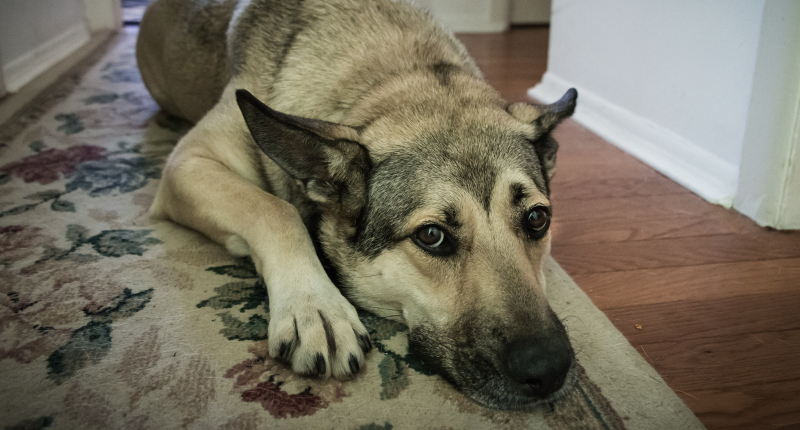 When Allie Schwartz returned to McDaniel from spring break last Sunday, her dog Cooper had something to say about it.

Cooper, the six-year-old German shepherd mix belonging to Schwartz’s family, expressed frustration and resentment over the fact he is not allowed to live with Schwartz in her dorm.

“I get really sad when Allie leaves,” Cooper said of Schwartz, a junior. “We spent so much together when she was in high school, but now that she’s in college, she comes home less and less. I miss her.”

Cooper lives with Schwartz’s parents and two siblings, but according to Cooper, they are unable to fill the void left by Allie.

While Schwartz is heartbroken to have to leave Cooper at home when she goes to school, she thinks it’s for the best.

“I love Cooper a lot and I miss him every day,” Schwartz said. “But even if I were allowed to have him in the dorm with me, with all the work I have to do, I wouldn’t have time to give him the care attention he needs.”

Schwartz continued, “I mean, for Pete’s sake, he needs a lot of attention—he’s talking to a student newspaper about how desperate he is to move in with me.”

“I heard that!” barked Cooper.

Schwartz also said that she frequently reminds Cooper that the College does not allow him or other pets to live on campus. This baffles him.

“I don’t understand why the school won’t let animals live in the dorms,” Cooper said. “Based on everything I’ve heard about the kids who live in Rouzer, I can assure you that I’m much cleaner than they are. They’re the animals.”

Polls indicate that Cooper is among 37 percent of dogs with a family member in college nationwide who wish they could live in college housing. In contrast, only 16 percent of cats in the United States wish they could live with their college students. Cats in the survey frequently cited how while they would have no trouble living in small spaces, the hectic nature of college life makes living in a collegiate environment undesirable.

Cooper expressed that his biggest fear is that once Schwartz graduates, she’ll move out of the house and he’ll see even less of her.

“Other dogs on the block have told me that once their kids graduated, they only saw them on holidays,” said Cooper.

Schwartz doesn’t expect this to be the case. “I’m not sure what I want to do with my life after I graduate, and I want to save up some money, so I’ll probably be moving in back home next year.”

She added, “Once I’m back, Cooper and I will have to find a way to make Dad smell less bad.”