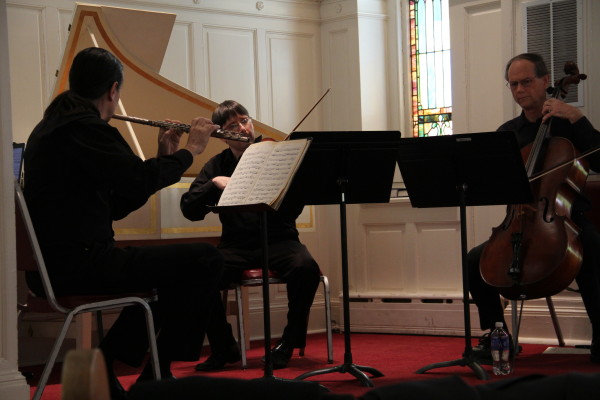 Harpsichord, violin, flute, cello. With these four instruments, the music of great composers—from Vivaldi to Handel—came to life in Little Baker Chapel.

The concert began with a sonata written by Georg Friedrich Handel and ended with a piece by Johann Sebastian Bach. Also performed were works by Antonio Vivaldi and Georg Philipp Telemann.

English professor Dr. Corey Wronski-Mayersak said she thought the music played was “beautiful,” and also enjoyed the bits of history the performers mentioned to put Baroque music, a period from the 17th and 18th centuries, in context. Student Allen Calvert also stated that he greatly enjoyed the performance.

The performers have very prestigious musical careers. Flautist Rodrigo Tarraza also plays the saxophone and has performed on three different continents. He co-founded an organization dedicated to French chamber music, Les Inégales, and a jazz-funk band known as Unfulfilled Desires. He has also taught music in Norway, the Netherlands, Germany, Chile, and the United States.

Violinist Nicholas Currie is from Canada and is part of the Azimuth String Quartet, Concert Artists of Baltimore, the Mid-Atlantic Symphony, and the Baltimore Opera Orchestra. He graduated from the Peabody Conservatory of Music and has performed with the Cuevo Quartet, Mariner String Quartet, and the Melos Ensemble. He also teaches music and paints. 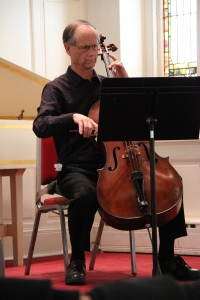 Cellist Tim Anderson at the “Go for Baroque concert on Sunday, March 8

Cellist Tim Anderson graduated from the University of South Florida and has performed in cities from Syracuse, Delaware to Mexico City, Mexico. He has co-founded New Music Baltimore, Baltimore Chamber Orchestra, and the Baltimore Improvisation Ensemble. He teaches at McDaniel, Carroll Community College, and Harford Community College. He and his group the Concord Ensemble appeared on the Today Show in 2005.

Harpsichordist Donald Horneff also plays piano and has been a part of the McDaniel staff since 1991. He graduated from Elizabethtown College and has taught music throughout Carroll County Public Schools. He recorded music for PianoDisc and has performed extensively throughout the mid-Atlantic. He is a member of the Board of Directors for Chamber Music on the Hill.