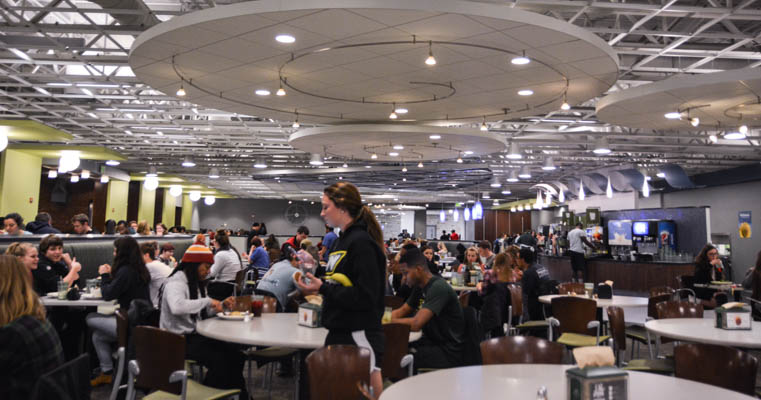 By the numbers, in the U.S. alone, Sodexo racks up $9.2 billion in revenue, employs 132,600 people, is in charge of 9,000 sites, and 700 facilities management sites, and serves more than 15 million customers daily. In a sense, McDaniel is just a little speck in Sodexo’s corporate universe. Additionally, the corporation has been heavily criticized both at McDaniel and on a national level for its business practices.

Moreover, there is criticism about the amount of control Sodexo possesses as the only provider of food on campus, aside from Vocelli’s. Resentment also exists when it comes to a general requirement to use Sodexo for catering.

At the same time, as highlighted by Dr. Ethan Seidel of the economics and business administration department, Sodexo has a massive amount of purchasing power, which allows Dining Services to spend less money overall on food stock.

Moreover, contradicting many student views, says Seidel, “Sodexo does not make any kind of profit off of the food service; they just get paid a flat management fee.” Essentially, there is no incentive for Sodexo to cut corners to increase its own revenue.

Seidel states that Sodexo is brought in for its expertise, purchasing power, and “…ability to move personnel in and out,” such as chefs, saving the college from having to go through elaborate hiring processes.

But what about the 1244 students currently on meal plans? Well, they are certainly part of the considerations. Administration ultimately seeks to keep the students, the college’s customers, satisfied.

Seidel elaborated on Sodexo’s predominant responsibilities: to provide meals for students, an obligation to cater events, meetings, etc., maintain locations like the pub, and a variety of quality requirements.

Believe it or not, Sodexo actually helps organize certain campus events and welcomes student assistance. According to Webster, McDaniel Dining helps organize Farmer’s Markets, food trucks coming on campus, as well as other events.Webster also asserts that McDaniel Dining Services was happy about the assistance provided by students during Waste Less Month.

When it comes to catering, says Seidel, Sodexo is required to provide catering for all campus events in need of food, unless it is unable to provide certain items. According to Seidel and Dean Gerl, the profit from catering goes to McDaniel, not Sodexo.

Gerl also states that the catering staff reaches out “…to figure out what went right and what went wrong” in each event, no matter the size. Nonetheless another factor has to do with health and safety, since certain outside sources might be questionable and not directly accountable to the college, says Seidel.

According to Dean Gerl, a major driving force behind Sodexo’s service is “satisfaction and what [Sodexo] is providing.” This relates to both dining locations and catering, as well as staying trendy and “…fulfilling their contract,” working closely with the college’s interests, and being held accountable, states Gerl.

In the future of Sodexo’s relationship with McDaniel, Webster states, “I think it’s always evolving and growing. What I like is that the college is very open. The leadership that I’m given is very positive and very much staying on edge and being competitive and, to me, trying to take care of the students.”

Seidel states that the contract between McDaniel and Sodexo is not indefinite and is subject to cancelation with “…a relatively short notice.”

Dean Gerl states that she looks at Sodexo’s responsiveness, ability to accommodate a variety of diets, creativity in limited venues to keep up with student likes and dislikes, and listening to input by the community. Ultimately, the decision maker is administration.

Read part one: “Cost and Variety.”

Glar to Have Wintertime Renovations