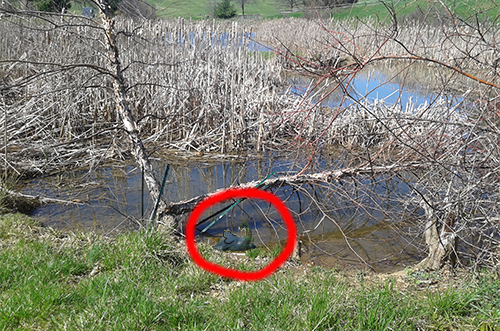 This past weekend, Campus Safety Officer Miranda Wright made a surprising discovery: the Coch Ness Monster really does exist.

Coch Ness is the name of the pond on the golf course. It’s been the rumored home of a Nessie-like monster for years, but Officer Wright was the first person in almost ten years to catch sight of the elusive creature.

“I always thought he was bigger,” says Officer Wright. “But he’s a small thing. He’s just got a very distinctive feature that looks like…well…you’ll see.”

She spotted the Coch Ness Monster while looking into the report of a student caught in the pond, held there by the plants.

“Instead, I saw him…and of course I had to get a picture,” she says. 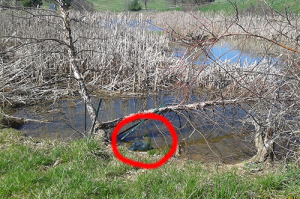 As the picture shows, the creature is less than a foot long. Although it does not have spikes along its back, there is a feature that looks like two sacks hanging from his back or, as Richard Long bluntly described it:

“It looks like it has testicles on its back. I think it stores food or water there, like a camel.”

Long was the first person to spot the Coch Ness Monster and get a picture of him. That was almost thirty years ago. 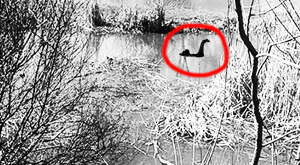 Now over fifty years old, he’s relieved another person got a picture of the creature.

“Nobody believed me. They said I fabricated the picture,” says Long. “Other people saw it, but they didn’t get photographic evidence. It’s a relief that someone finally did.”

Wright and Long have checked satellite footage for evidence of the Coch Ness Monster, but they have come up empty.