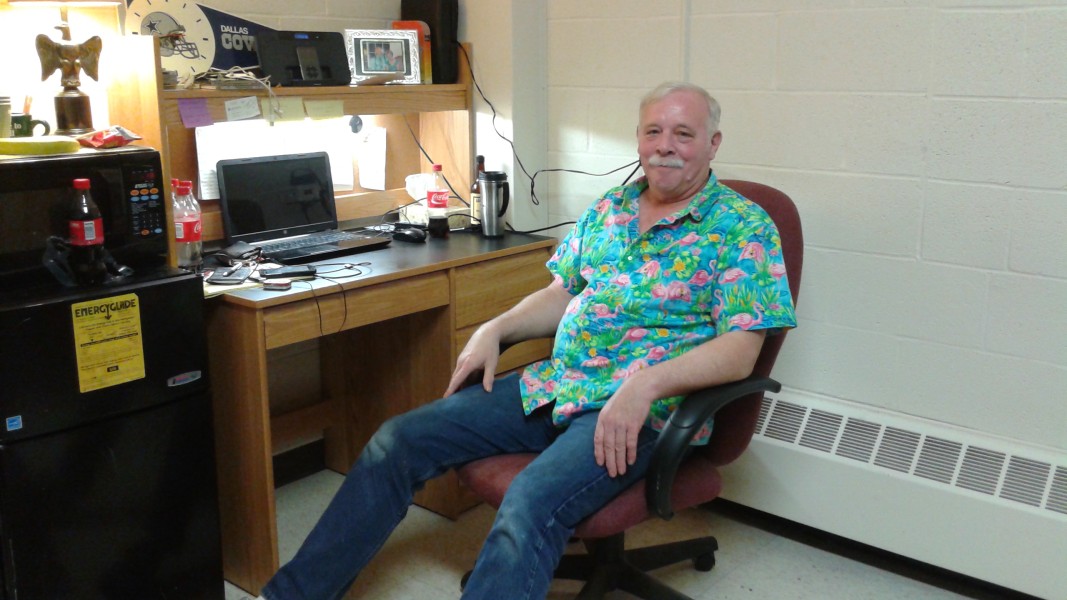 When I first meet Allen Calvert, he wears a smile and a tailor-made-by-his-award-winning-girlfriend blue and green Hawaiian shirt covered in flamingos. He invited me into his “natural habitat”: a double-turned-single room on the first floor of Rouzer. Inside, the furniture is arranged so that the wardrobes and bunked beds make another tiny room to the right. The desks are against the back wall. A card table covered in a Dallas Cowboys blanket holds Peeps and other Easter goodies in the remaining open space.

He offers me a beverage and a seat, encourages me to call him Allen, and invites me to have some of the sweets available. Then he settles in his desk chair, ready to sate the curiosity of a student body that have been wondering about the “old guy in the Hawaiian shirts” — his words, not mine.

The Old Guy in the Hawaiian Shirts

Calvert is studying business with a focus on environmental issues in order to become a facilities manager. He currently lives between Frederick and Hagerstown, but for now, he calls Rouzer his home. Although originally a commuter, he decided to live on campus this semester to save himself from at least fifteen hours of extra driving a week. When looking for housing options, Michael Robbins seemed surprised that Allen decided the first floor of Rouzer was better than higher floors in upperclassman dorms.

“Mike, do you think it matters to me if the kid next door is 18 or 22?” Calvert, who will be 60 this month, told Robbins. “There’s not that much difference to me at this stage of life.”

After 20 years in the military, 14 of which were spent in Germany during the Cold War, 10 years of work, and three years at community college, Calvert’s stage of life is certainly far enough removed from the younger students that a few short years that mean the world to us doesn’t mean much to him. In fact, Calvert is ready and willing to joke about his age. 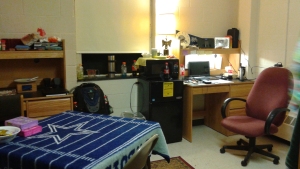 Calvert’s decorations give the Rouzer room a homey feel.

Calvert also finds that his age gives him a different perspective on more recent historical events discussed in his classes, such as the iron curtain in the Cold War, because he lived through them.

He said, “I know that’s ancient history to you… old news. So it leaves a different spin on things.”

Calvert said that many people ask him how he can be happy living amongst students that are around forty years younger than him.

His normal response is, “How could I not be happy?”

“I’ve lived in eight-man rooms. I’ve lived in 30-man bays where all you had was a bed and a wall locker,” Calvert said. “That was it. Everything you owned was right there.”

“By comparison, this is very nice living,” says Calvert. “And a lot of military mess halls are a lot worse than Glar.”

The Hottest Guy on Campus

One story Allen told me was of a conversation a friend showed him on Yik Yak. Somebody posted the question: “Who’s the hottest guy on campus?”

One of the responses: “The old dude in Rouzer.”

“My girlfriend is technically a cougar because she’s older than me.” Allen said. “And so I teased her [about it]. I said, ‘Not only are you an old girl dating some college kid, but you’re dating the hottest guy on campus.’”

Calvert spent three years at community college before transferring to McDaniel. For a while, the Hill was not on his radar, but he ultimately came here because of the culture on campus.

Being in the military during the Vietnam Era was not popular, so Calvert is sensitive to anti-military undercurrents in the people around him. 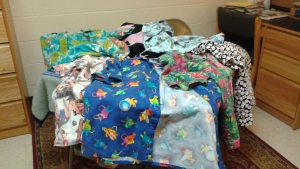 “The stories I could tell you about the way they mistreated veterans back then…it’s not like when veterans travel now and people thank them,” he said. “The president of the school can sign a document and make policy in a second. It takes a long time to change a culture. I felt with [McDaniel’s] long history with the ROTC and everything else, it felt like it would be a good fit for me, and it is.”

The only thing Calvert would say he does not like is his inability to have two things with him on campus: his cat and his king-sized waterbed.

Despite having decades more experience at living than most students on campus, Calvert says that he gets “a lot of insight on life from the young people here,” and he thinks he shares some as well.

He also dislikes the negativity about millennials in the media.

“By and large, there’s good young people here,” says Calvert. “You see all the negative crap in the news because that’s what sells. Even a bunch of people in my generation talk about kids these days. Well you know they talked about ‘kids these days’ when I was your age, and I was much worse than most of the kids here.”

To Write a Book

Since he’s a non-traditional student, Calvert has heard from many people that he should write a book. However, those people were usually family or friends, so he hasn’t seriously considered it.

Then Dr. Casey agreed with those family and friends.

Says Calvert, “You know, if you hear something enough times, you think ‘well maybe.’ Then you hear it from somebody on Dr. Casey’s level and you think ‘maybe there’s something to this.’”

Although still currently toying with the idea, Calvert is seriously contemplating sharing all of the “amusing anecdotes and stories and tales” he has to tell.

Before conversation devolved into discussions of his shirts, card games, dorms and why the mid-Atlantic is a good place to live, I asked Calvert if he had any advice for the young people on campus that often find contemplation of the future daunting.

First, he said, “Enjoy it while you can.”

In terms of contemplating future careers, he added, “In that regards, a liberal arts college like McDaniel is a good place to be, especially if you don’t have a definitive career trajectory, because you’ll have a solid background. I’m training now for my third career. So don’t get too worked up about what you want to do with your life. Very few people go in and have a one-path career for their whole life.”

McDaniel Compliments: The Evolution of Kindness