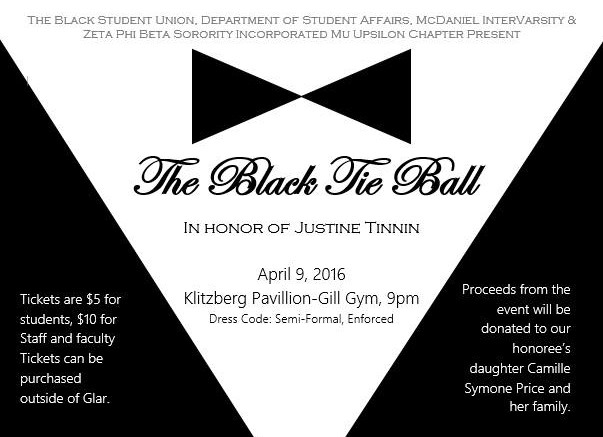 From the activism and hunger strike that happened at Mizzou last November to the continuing work of the #BlackLivesMatter campaign to try to draw attention to racialized police brutality, it has been a huge year for black activists, namely college students. McDaniel hasn’t been exempt from this either –as last fall we had the “Day of Remembrance” vigil for victims of police brutality, and the Progressive Student Union held events in support of the Mizzou protests. In addition, the Black Student Union will be hosting an event on April 9 called “The Black Tie Ball,” which is a tribute to Black Excellence and a celebration of the things done to bring national issues to McDaniel and make strides towards a more inclusive campus.

Just what is black excellence? “It’s success,” says BSU Treasurer Alex Leonard, “and I define that as building on the legacy of Malcolm X, Rosa Parks, Martin Luther King Jr. or Victor McTeer.”

Leonard went on to explain how hard black leaders in the past have had to work to get the rights that black citizens currently have – “It’s respecting the hard work and sacrifice they made to get us where we are now, and that’s hard.”

The reason why black lives and black excellence deserve attention now may be lost on onlookers may be due to privilege – while many will address overt racism, it is hard to understand the systematic and indirect ways that many black Americans face if you haven’t faced it directly.

“The conversations in white households and black households tend to run a little different,” Leonard reflects, “my mom always used to say ‘work twice as hard to get half as far’. So that’s black excellence – it’s working twice as hard.”

Leonard also noted that the experience of any black student or person will be different, that her, like any one person, could not be representative of the entire black community. That is what makes it all the more important to get to know more stories, like the ones that will be told at the Ball.

In response to the death of Justine Tinnin, the Black Tie Ball was not only postponed, but dedicated to the senior student.

“Justine just embodied black excellence like no one else. Even with having a daughter and raising her, she worked hard to graduate in 3 and a half years.”

With the Celebration of Life service for Justine this past Wednesday, the Ball seems like a great way to continue Justine’s legacy of overcoming adversity and keeping her spirit and joy.

It is incredible that black students are able to work not to just survive, but also thrive within systems that can be hard for them to navigate. As minorities in a predominately white country, it is easy to feel as if these systems are unwelcoming, as they were not built for them, but for their white peers. That’s what makes it all the more important to commemorate the black excellence that has been displayed across the country this past school year, as well as when it happens in our own midst here at McDaniel.