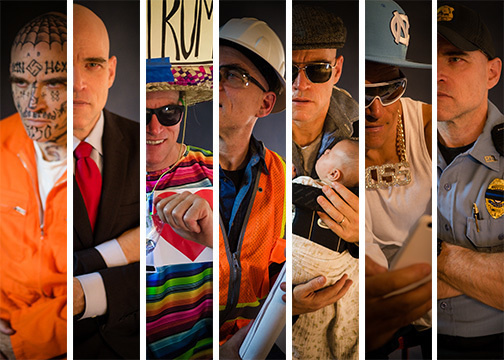 For the past month, McDaniel College’s Rice gallery displayed an array of art outside of the usual bubble, containing not still images but video. These videos range from a full length movie to an interactive online video game. Made up of three displays, the “Unincorporated” exhibit by Zoë Charlton and Tim Doud, with collaborators Gina Lewis, Rodney Cuellar, and Amy Gaipa, is truly something to behold.

The exhibit that first catches the eye of the viewer is called “Straightacting.” It is a series of what seems to be eight portrait photographs mounted along facing walls. These are actually ten-minute looping videos of artist Tim Doud posing in different positions and wearing various costumes.

Dressed and posing as different personas, Doud, Cuellar, and Gaipa are attempting to get the viewer to consider the fairness of what America’s social expectations are for each stereotyped individual and their positions. Interestingly, as Dr. Ingebretsen says in his review of the exhibit, this is not the first time that art like this has been done, although in the past it was conducted exclusively with women as the subjects. Here the artists have added a twist of originality by switching the roles in an attempt to cause their viewers question and perhaps even to challenge how America today perceives men and their role in society.

The actors in this style of art are supposed to be perfectly still so that the viewer will be completely unaware that the picture is a video and not a photograph. As Cuellar pointed out however, it is common knowledge that it is impossible to stay perfectly still for a long period of time. Instead of writing that off as an unfixable error, the artists embraced that failure as part of their message. In fact, Cueller himself stated that the pieces are “all about failure.” Essentially, the point of this exhibit was to call out American stereotypes as being both unfounded and impossible.

As the viewer turns the corner past the videos, they find themselves in front of yet another screen, but this one is displaying a more traditional style of video: a movie called “Whity” by Rainer Werner Fassbinder. At first look, it is hard to see how this is original art, but after a few minutes of watching the film, it will startlingly be interrupted by commercials. Again, however, the viewer might mistake this as simply a movie shown on television, naturally interrupted by commercials; yet close inspection will prove that these commercials are in fact carefully selected as reactions to the ideas portrayed in Fassbinder’s film. An original spin on an old idea, the handpicked commercials add an intriguing twist to the film, intending to, as artist Tim Doud put it, “respond and merchandise with the film.”

Though somewhat unique, from a viewer’s standpoint, this specific exhibit is lengthy, sitting at around three hours. If one can find the time to sit down for that length of time and enjoy the art, it would be very stimulating indeed, but for most, the magic is lost on them as they grasp two or three minutes of the film and then move on, missing the intended message of the artwork. Does that then lessen the quality of the art? Perhaps not, but unfortunately, it is likely that the majority of viewers will stop and observe for a few minutes and then move on, not catching the response and merchandising intended by the artists.

The last part of exhibit looks at an image projected from a laptop. Unlike the previous exhibits, this one is an interactive work of art. Entering the world of an online video game called “Second Life,” the viewer is encouraged to enter the world and interact with others in any way they please. “Second Life” is a game where the player creates an avatar and lives another life, behaving however they would like, meeting and interacting with other people in the game world.

Artists Zoë Charlton and Gina Lewis described this artwork, an exhibit they call “Pilgrimage,” as exploring the ideas of cultural tourism and cultural tokenism, as well as identity. “Pilgrimage” is also intended for the viewer to explore the larger concept of developing friendships through media. “Second Life” provides a digital canvas for people to interact with one another and develop relationships and discuss ideas such as the previously mentioned cultural tokenism and tourism.

Although an interesting idea, if this exhibit were taken to the Rec Lounge, it is not likely that most viewers would be able to distinguish it as being different than the other video games in the lounge. The “Second Life” exhibit certainly provides the viewers with a lot to think about, but it is difficult to figure out what distinguishes it from other online role-playing games. In addition, a viewer cannot fully experience the wonder of the art without spending multiple hours behind the screen developing a character and knowledge of the game’s mechanics; a turn-off for many the casual viewer. Nonetheless it is a valuable resource for thought and visually mind-capturing.

“Unincorporated” is truly a unique experience for both artists and non-artists alike. Given enough time, the thought provoking and visually stimulating exhibit will capture the mind and heart of any viewer.