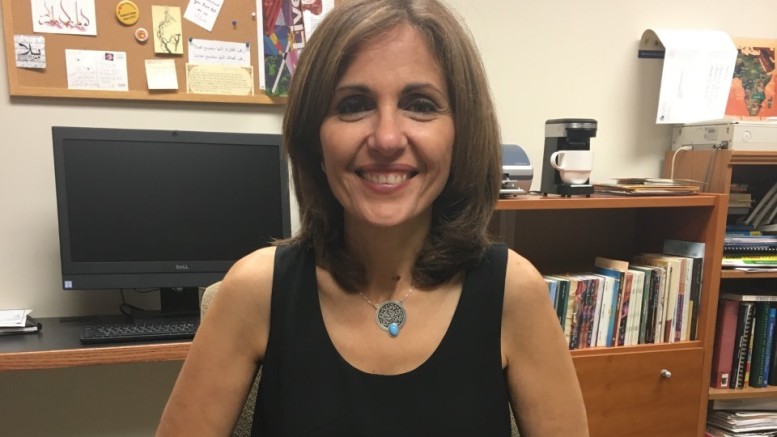 Coming to the U.S. was a big transition for her, especially seeing Americans happy and carefree.  She said that in a third world country, life is not so smooth and easy. Zaru said that while living under military occupation, she “was exposed to violence all the time and that was really hard for [her] to live there.” In Palestine, “you can’t drive more than a few miles without being stopped by a military vehicle and interrogated.”

One of the difficulties Zaru faced when she first immigrated to the United States was that people didn’t know where Palestine was, or if they did know, they believed that people from the region were associated with terrorism. Often, she had to go the extra mile to prove to people that she is a good person. “We are nice people and it was so unfair to me that I had to explain myself all the time and other people didn’t have to…apart from that and being homesick, I had a great experience as a college student.” After college she went back home to work, got married, and had her children.

The reason for her second move to the U.S. was the worsening political situation in Palestine. She said that “adjustment was more difficult to my children because they are not used to the American system. They aren’t used to being away from their grandparents. [In Palestine] we are used to being a close knit family but here they were away from all of that.” To make things worse, they moved to a county that is not very diverse. Even though her children spoke English fluently, they didn’t look like everyone else.

Her son, who has a darker complexion than his sister and who has an Arabic name, was harassed and called names in school. She believed that was because “people are ignorant, and ignorance creates fear, and fear plus ignorance create bigotry.” Americans have been exposed to all the negative things they hear about Islam and act upon them instead trying to learn from different cultures.

Several international students at McDaniel have also spoken about their experiences with coming to the U.S. They all came here for one reason: to get a better education and to be whoever they would like to be. Agut, a junior from Ethiopia, says, “you can be whatever you want to be and are free to do so.” They all came feeling very anxious because they didn’t know if they would fit in.

Before coming to the U.S., the international students didn’t have to worry about people understanding them when they spoke English, or about making new friends and being away from their families. Back at home, they know their neighbors, and they eat with them; these students miss that. But one thing that is similar between here and their home countries is that no matter where they go, it is not easy to get comfortable with new people and make friends. In spite of all these challenges, they are incredibly strong and grateful for the opportunity to be in the United States.

If you come across someone who you think might be new to this country, try to start a conversation with them. You will be delighted to hear some incredible stories about them.