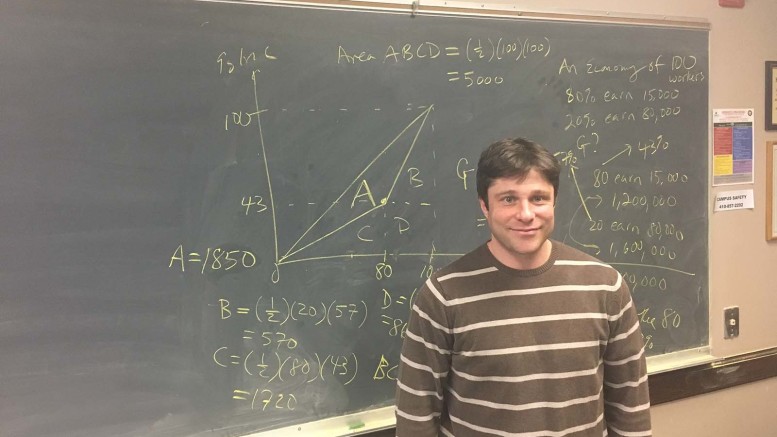 As an undergraduate at the College of Charleston, Nicholas Kahn, Ph.D., started down the path of economics.

As a graduate at American University, Kahn remained fixated on his passion for economics, and the lives he could influence as a professor.

And as a doctor of philosophy in economics, Kahn knew that McDaniel College was perfect for him.

“From the very start, I knew the small, liberal arts school was the best fit for me,” said Kahn. “And because of McDaniel’s focus on quality faculty, I knew McDaniel was my place to teach.”

Entering his second year as a professor at McDaniel, Kahn’s favorite class to teach is Labor Economics.

“The opportunity to delve into specific questions and applications of microeconomic theory through the lens of labor markets is what makes it my favorite,” said Kahn. “Plus, the 3000 course level brings students who are truly interested in the topic.”

Kahn currently lives in Baltimore with his wife and two young kids.

When he is not in the classroom, Kahn spends his time with his family, and coaches his daughter’s soccer team, The Blueberries.

As a coach, a professor, and an avid Ravens fan, Kahn has developed a new class at McDaniel for the Spring 2019 semester titled The Economics of Sports.

“I’m genuinely excited to teach this class,” said Kahn with a smile. “Students seem much more interested in this course than they usually do for an economics course, and I plan to build off of that excitement.”

“Dr. Kahn is a dedicated professor, and he brings a unique energy to the classroom,” Griffiths said. “I’m excited to see how he devotes his passion for economics to sports.”

A McDaniel athletics fan, Griffiths is excited to see how she can apply economics to the world of sports after taking his class next semester.

Megan Mitchell, another student of Kahn’s, has enjoyed his Labor Economics class this semester. As a student who typically dreads any economics course requirements, she attributes her enjoyment to Kahn’s style of teaching.

Kahn is a proud member of the McDaniel economics department, and plans to continue shaping McDaniel students’ futures for years to come.