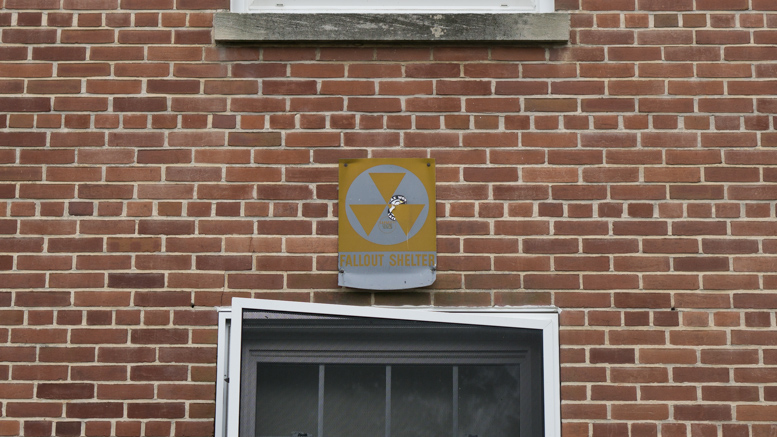 Fallout shelter signs on multiple campus buildings remind us of past and present nuclear threats. Photo by Kyle Parks.

The sun is shining, birds are chirping and students are walking to classes. Just another usual day at McDaniel. Then, in an instant, everything is disintegrated, leaving behind only rubble and despair. North Korea has just struck the United States with a nuclear missile.

Could anyone on campus survive such an attack from North Korea? Many have heard of the bunkers built on campus, but few, if any, know where they are, let alone how to enter or operate them.

McDaniel was even home to the Wartime Information Security Program (WISP), which, in the event of nuclear war, would be hosted in the basement of Lewis Hall of Science. On this bunker, College Historian James Lightner recalled that it “was the worst kept secret on campus. Everyone knew it was there, but no one had ever seen it.”

The North Korean threat may not actually be any greater now than it has been in the past, despite all the recent bombast between the current leaders of the two countries, Donald  Trump and Kim Jong Un.

“North Korea has been detonating (nuclear) bombs since the ’80s,” says Francis Grice, a McDaniel professor of political science. “They declared war back in 1994. Aggressive rhetoric is not terribly new.”

However, there is still reason to be concerned with recent provocations.

“Shooting missiles over Japan is a deliberate violation of Japanese airspace,” Grice says. “This represents a deliberate provocation and they (North Koreans) are deliberately trying to escalate the crisis.”

North Korea poses a great threat to the United States.

“North Korea is the greatest military threat we face,” says McDaniel professor of political science Matthew Mongiello. “If we were to get into a major war, it would not be surprising if it was over North Korea.”

Current reactions and policies from the Trump administration are a mixed bag, drawing both concern as well as some modest praise.

“The current president is in a situation without good options; he needs to be cut some slack,” says Mongiello. “Current policies are not that different from past administrations. Current rhetoric is concerning and with the Trump administration I am slightly more concerned.”

“If Clinton had won the election,” Grice says, “we would have just seen an extension of the Obama administration era policies. We would see similar scenarios but with a calmer and much more multilateral response. We would be a lot less close to the brink of war.”

The Trump administration has been attempting to work with North Korea.

“We ask, ‘Would you like to talk?’ We have lines of communications to Pyongyang,” Secretary of State Rex Tillerson said last week, as reported by CNN. “We’re not in a dark situation or a blackout. We have a couple of direct channels to Pyongyang. We can talk to them. We do talk to them. Directly, through our own channels.”

Grice does not see much changing in the near future.

“There is just a lot of sabre rattling,” Grice says. “It’s like a game of chicken and neither side can afford to collide.”

The Trump administration seems to understand the tenseness and seriousness of the situation.

“I think the most immediate action that we need is to calm things down,” Tillerson said, as reported by CNN. “They’re a little overheated right now, and I think we need to calm them down first.”

However, a missile launch from North Korea is not the only threat.

“My worry is that a collapsing regime uses nuclear weapons,” Mongiello says. “If their economy continues to deteriorate, North Korea could start selling nukes to states or non-state actors.”

Many have thought about how to solve this issue, and no one has a perfect solution.

“The long term solution would be the normalization of relations, and to bring North Korea back into the world community,” Mongiello says. “If we expose these nations to democracy and the benefits of trade between nations, things will get better in North Korea. We don’t worry about Europe or Israel having nuclear weapons. How do we get there with North Korea?”

It is best to prepare for the worst in any situation. When walking around campus, keep an eye in the sky—and if you see something, you may want to make your way to the safety of the basements of Lewis Hall of Science, Daniel MacLea Hall or Albert Norman Ward Hall.