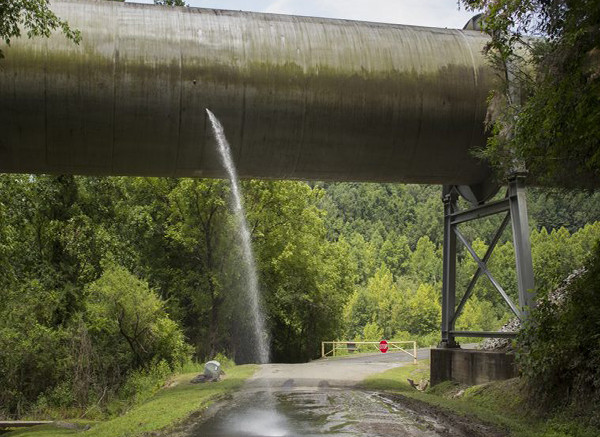 Through the month of October in the Rice Gallery, a combination of paintings and photographs gave viewers an interesting set of ideas to consider. Micah Cash’s Hydropower exhibit was comprised of two separate projects: Hydropower, made up of paintings, and Dangerous Waters, made up of photographs. Despite intending on exploring two different ideas with this exhibit, Cash still displayed them together, as they consider the same subject matter.

Beginning with Dangerous Waters, Micah Cash travelled to Tennessee to take photographs of the Tennessee Valley Authority’s hydroelectric dams. Though they do not seem to be anything more than simple dams, these industrial behemoths allow for plenty of consideration in the psychological realm. While the dams are primarily sources of power for the state, they also serve as recreational locations for the public.

Additionally, the creation of these dams was detrimental to the surrounding communities. As with the creation of any dam, the water behind it builds up and spreads out, causing families and communities to be relocated. As Cash himself states, these photographs are designed to actively question the relationship between industry and community. Cash carefully composed his photographs in order to bring out this juxtaposition. He framed the dams such that the man-made construction stands out clearly from the nature around them.

Curiously, Cash also discussed how part of the purpose of the creation of these older dams was as a statement of power and glory for the economy. While the economy was booming, these dams were created to add more money and power to it, but that was not their only purpose. Instead of designing a simple utilitarian dam, the companies created grandiose architectural monuments intended to symbolize the greatness of the American economy. This also can be seen in Cash’s photography. These dams truly are splendid to behold. Their architecture is as grand as it is unnecessary. It is interesting that although these dams were built in the 1940’s and 1950’s, they still make a statement today.

Now, these dams serve two purposes: to provide power and to provide recreation. While their creation displaced many, it still gives back to the community in both energy and social development. It is still a difficult balance, however, and Cash’s photographs do well to explore the relationship of the dams and their communities.

These photographs are clear and large, and do an excellent job of representing the grandeur of the dams. Truly a sight to behold, any viewer would be awestruck by the architectural power of these dams, captured remarkably by Cash. In addition, these photographs also display the beauty of the dams and their surrounding locations.

Not only is the landscape and nature surrounding the dams strikingly beautiful, but in some of the photographs, people can even be seen enjoying themselves in ways that they would not be able to without the dams. Micah Cash successfully accomplished his intention of interpreting and questioning the relationship between industry and community. These photos are deserving of a look from any viewer, even if only for their skillful capture and striking beauty.

Though a separate project, the Hydropower paintings deal with the same subject matter; Painting the hydroelectric dams gave Cash a different way to interact with the feelings and emotions surrounding the construction of the dams. Using a variety of painting styles including collaging, masking, and scraping, these pieces demonstrate Cash’s skillful and diverse usage of the medium.

Interestingly, Cash’s composition and line usage perfectly personified the relationship between industry and nature. As he stated, any line that is straight and defined is generally something man made, whereas lines that are flowing and undefined are generally representative of natural things.

A specific painting, Watts Bar, shows a “fuzzy” rendition of the Appalachian mountains in the background, which are abruptly cut off by the tight architecture of the dam. This particular painting does an excellent job of summarizing Cash’s Hydropower project as there is a literal wall barring the way to the mountains in the background. This allows a clear opportunity for the viewer to question how these dams have impacted the nature and communities surrounding them; exactly as was Micah Cash’s intention.

Overall, this exhibit was outstanding, and it clearly accomplished the goal of the artist. Although Cash claimed to be an amateur photographer, this was not at all evident as the pictures appeared to be of masterful quality. Clearly and beautifully demonstrating the fragile relationship between nature, community, industry and economy, Cash achieved his aim in Dangerous Waters. The paintings were also moving and strong in their contrast with nature and industry.

While the subject matter of the paintings was initially unclear, a closer look and study of the pieces soon revealed the meaning behind them. Creatively and skillfully painted, Cash gracefully and effectively discussed his subject matter.

All in all, Micah Cash has brought a subject matter well worth considering to the table and discussed it in detail with his striking photographs and deep paintings. The Hydropower exhibit was phenomenally done.

Visit “Lairs”: Drawings and Paintings by Ryan Browning Before it’s Too Late