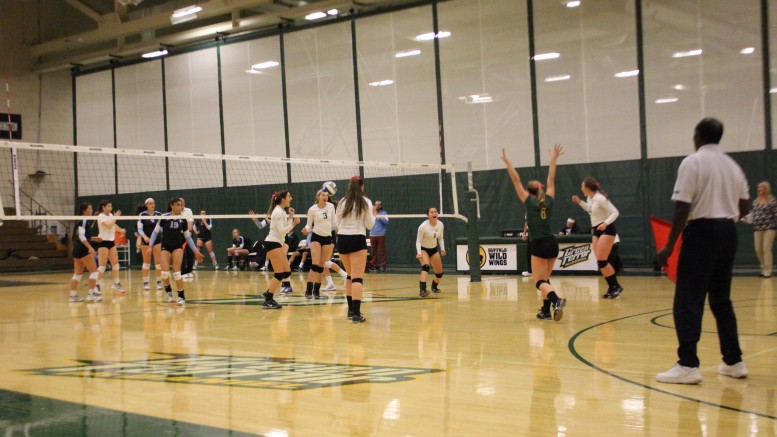 McDaniel Volleyball celebrates a point during their loss to Johns Hopkins. Photo by Casey Marson.

McDaniel Volleyball honored Breast Cancer Awareness month on Tuesday night at the Gill Center, hosting a “Dig Pink” event during their Conference match against Johns Hopkins. The team encouraged all fans and supporters to wear pink while the players were outfitted in their home whites with pink ribbons in their hair.

Despite the loss, the Green Terror (12-14, 3-6) displayed a great deal of tenacity and teamwork. Individuals put a great deal of pressure on the Blue Jays, displaying impressive game play.

The underclassmen seized the court at this game and posted some notable statistics, showing a great deal of potential for McDaniel Volleyball in the future.

Despite the strong effort from the Terror, Johns Hopkins came away with the win.

Johns Hopkins secured the top seed in next week’s Centennial Conference Tournament with the win against the Terror. They won the first two sets by consecutive 25-20 margins before attaining the sweep with the 25-14 third and final set.

Though the Terror was unable to defeat Johns Hopkins, they did not go down without a fight. McDaniel showed a great deal of competitiveness and athleticism, foreshadowing a bright future and tremendous potential.

Besides the loss, the game was a success in McDaniel’s book as they were able to bring attention to Breast Cancer Awareness Month, and the team and their fans united together to support an important cause.