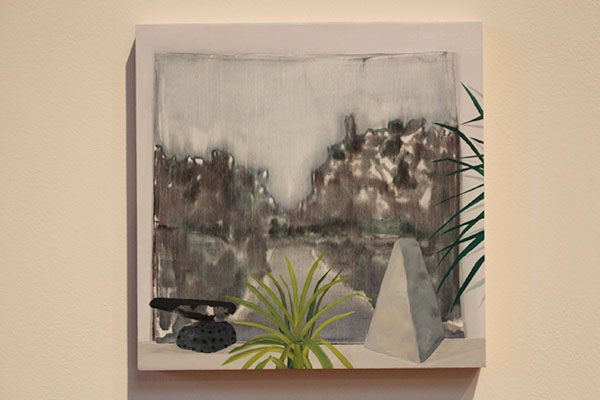 “We roam and lie still” is a somber addition to the Rice Gallery, reflecting the recent bout of dreary weather and an eerie silence that has fallen upon the campus. The exhibition is brought by the Art and Art History Department. While it is meant to be taken down Nov. 18, that doesn’t stop it from reflecting a glimpse at the winter ahead. 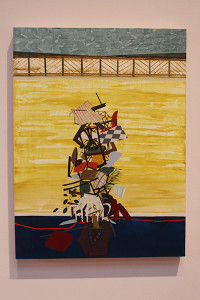 “We roam and lie still’s” most prominent feature is the combination of nature and man-made material that intersperses its paintings. One in particular, “if you could take it all with you, you would”, reflects a pile of twisted trash sitting on a sandy beach, fog rising languidly in the background. Another, “prepared to reconsider their goal”, is a more subtle approach, hiding bits and pieces of vibrant color in an otherwise dull background of a tree-riddled swamp. While not all of the paintings feature colorful trash and chunks of metal, it’s clear through the contrast between the focus of these pieces and the background that this is a reflection on the struggle between human consumption and the tranquility of nature.

Another prominent display throughout the exhibit is the amount of fog and mist in each of the paintings. Each one can be described differently, with variations from almost bright to downright depressing, but when looked at as a whole, the exhibit gives off an aura of somberness. Looking at some of the pieces in this exhibit is like looking back at a memory that you don’t quite want to remember, one that brings with it a slew of dull emotions. Even the title of the exhibition, from its lack of capitalization to its foreboding contradictions between “roam” and “lie still”, awakens in the viewer a feeling of melancholy.

Magnolia Laurie, the artist, attempted to capture what she felt was the most base part of human nature in the face of futility. Born in Massachusetts but raised in Puerto Rico, Laurie felt a wandering sensation for most of her early life, and she admits that she “felt completely separated, like [she] was on an island in the middle of nowhere.” Eventually, she went on to become the artist that she is today through perseverance and a truly astounding expression of the emotions she felt as she was growing up, but her life wasn’t without its hardships. Her art style borrows extensively from the little things in her life; the three-dimensional aspect of her paintings and sculptures arises from her noticing how her mother often constructed little things in her house as a child. 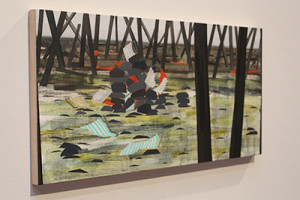 Laurie’s sense of separation is evident in the style of her paintings: thought-provoking, but at the same time emotionally distant. They, like she did at one point, exist within a bubble of separation that one can’t break without really looking into what her works make oneself feel. “We build for need, not aesthetic,” she says, and that sentiment is all too evident within every aspect of her work. Laurie’s art isn’t meant to be beautiful, even though it is; it’s made to force a person to confront the idea that their existence, like these brief moments in time, are ephemeral.

Laurie’s gallery is sponsored by the Art and History departments of McDaniel College. If you would like to learn more about Magnolia Laurie and other upcoming showings, you can visit her site here.

10 local Maryland/Virginia bands (and albums) you should listen to