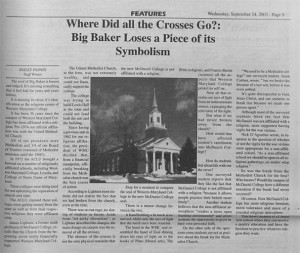 In this article, author Bailey Fannin tells the real story of McDaniel’s dropping of its affiliation with the Methodist church amid a lawsuit with the ACLU accusing Western Maryland and other schools of not upholding a separation of church and state. Due to involvement in a construction project at the time, and losing a similar lawsuit in 1962, the college’s president made the decision to drop affiliation with the Methodist church. The transition, says the author, was smooth, with many members of the Western Maryland community unaware of the change. Efforts were undertaken to remove the crosses from campus chapels, and the school’s seal was altered to remove religious imagery. 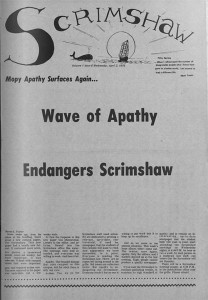 This attention-grabbing front page went off the presses in early Apr. 1975. Author Baron L. Tayler reveals that Western Maryland’s student newspaper, then called the Scrimshaw, was threatened by apathy. He details high readership, yet growing issues with apathy as the paper’s flow of content seemed to slow. The Scrimshaw’s status as a weekly paper was threatened, and that week’s paper was nearly not released. Tayler calls upon the community to help keep the paper weekly and for anyone to attend meetings. How relevant this article is today, given the Free Press’ own dire struggles with apathy–we are now only a monthly paper, though we have a highly active online presence. Nonetheless, the Free Press has seen involvement drop severely in the past half-decade–all students ought to help preserve the Free Press as well! 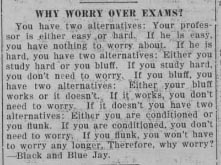 In a humorous, repetitive type of logic, “Black and Blue Jay” affirms to students that they need not fret over exams, saying that they ultimately do not matter. This manages to find relevance even nearly 92 years later, with final exams looming in the near future.

In this article, we are informed that Western Maryland’s rifle team was filmed by the International News. This “moving picture” was set to air all around the country shortly thereafter–the first time Western Maryland had appeared in the “moving picture world.” The reels, we read, contained the team firing then having an animated discussion at the targets. 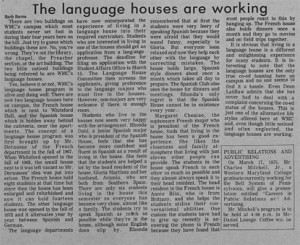 Author Barb Burns tells a lot about the origins of McDaniel’s language houses, which saw success even early in their existence. After the construction of Whiteford Hall, the small house next door (now housing Conference Services) was left vacant. To fill this vacancy, then French Professor Derausse brought up the idea of establishing a French House. Thus, in the fall of 1968, French students lived together in the first co-ed housing on campus while being immersed in the French language. The successes of led to the addition of another language house, which alternated between Spanish and German from year to year. In addition to immersion in their languages, students also enjoyed the family-like relationships with their housemates. Today, McDaniel has language houses in Spanish, German, French, Arabic, and ASL.

Letter to the Editor: Making the most of college