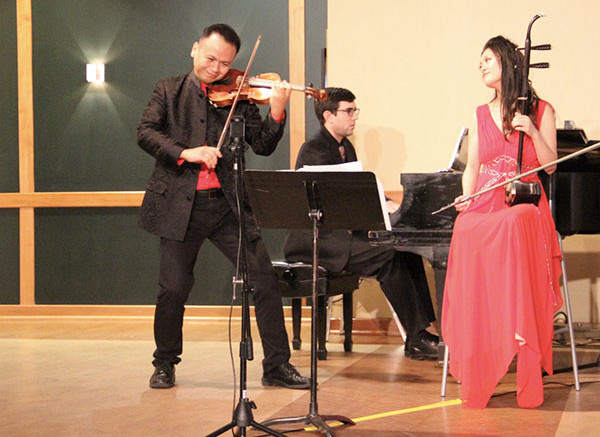 Xiang Gao in the violin and Cathy Yang in the erhu. Photo by Lexi Corral

Music can unite people as a whole, especially in today’s world.

The evening of Sunday, Nov. 13, McDaniel College’s Chamber Music on the Hill, in collaboration with the Music Department, presented the concert “6ixwire,” where the musical talent of musicians Xiang Gao, Cathy Yang, and Matthew Brower, all of whom are specialists in Asian music, was presented. The concert took place in the Forum at 7 p.m.

The three musicians opened the concert with a 6ixwire arrangement titled “Sunshine over the Tashikuergan,” and the piece ranged from a light, soft tune to a rapid pace, which made it engaging to the ears. Xiang Gao played the violin, Cathy Yang played the erhu, and Matthew Brower played the piano for this piece and for the rest of the concert. 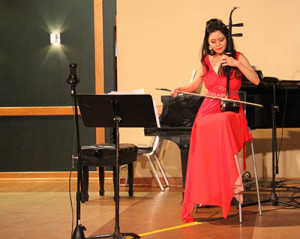 Cathy Yang had her own solo in “Bird’s conversations in an empty mountain.” The erhu is a Chinese violin, which is an essential leading instrument in Chinese music. Her unusual instrument had the crowd in awe with its delicate sounds that imitated the calls of birds.

The audience absorbed the sounds from the musicians in total silence. Jeremy Crowley, a freshman, states, “There is a big difference in our music and the Chinese[’s]. It’s interesting how Cathy really can’t move much when she plays the erhu.”

The next piece in the program was a Tianhua Liu/Xiang Goa arrangement, “Enchanted Evening for solo violin.” Xiang Goa led the performance on his violin while Matthew Brower followed playing the piano. This arrangement is made originally for the erhu, but Xiang took the reins to create a similar sound.

After the intermission, the three musicians joined forces to deliver a beautiful piece, “New Butterfly Lovers Concert,” an arrangement by Gang Chen and Zhanhao He/Xiang Gao, which tells a Chinese version of Romeo and Juliet.

The romance was the longest piece of the night and it presented different tones and rhythms to tell a love story. The piece went from soft to upbeat to dark/intense and back to soft. The diversity of this song displayed the tragic love story between the Chinese lovers, but in the end showed they will always be together. 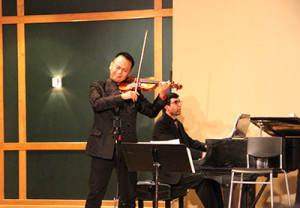 The final piece of the night was an Astor Piazzola/Xiang Gao arrangement, “Liber-Tango”, which brought on a different sound from the previous pieces. As expected from the three experienced musicians, the overall concert was beyond what anyone could imagine.

Xiang Gao stated, “I have been playing for almost twenty-five years now. I started at a very early age and went to a music boarding school in China.” Xiang moved to the U.S. from China to continue his love for music. He travels throughout the U.S. and around the world for others to hear the “6ixwire” series.

When asked what advice he can give to young musicians, he exclaimed, “If you are a musician you should know that you can use music as a powerful tool to unify people and reach out to people. You can change their lives, make them laugh or cry and create music that will keep you fresh in the life.”

Overall, the performance was a treat to the ears. “6ixwire” was a very successful concert for the 2016-2017 season. The next concert in the series will happen Sunday, March 5, 2017, at 3 p.m. in the Forum, and even though that is a long time to wait, it will certainly be another treat to the ears.