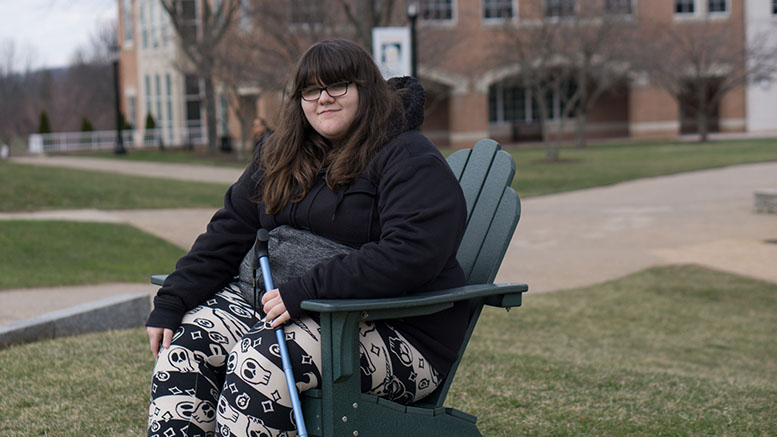 On the surface, Kaitlin Michael, or Kat, is like many other McDaniel students. She is a psychology major finishing up her senior year, and she works as a peer mentor.

However, Michael struggles on a daily basis with severe pain, which can disrupt her daily schedule – even to the point of making her unable to leave her bed on occasion.

Michael suffers from endometriosis, a painful autoimmune disorder centered in the uterus. According to Mayo Clinic, this condition occurs when “tissue that normally lines the inside of your uterus – the endometrium – grows outside your uterus.” Endometriomas then attach themselves to other organs, such as the ovaries and thigh muscles, and cause severe pain.

According to the Endometriosis Foundation of America, an estimated 170 million women worldwide suffer from this condition, which includes 1 in 10 women in the U.S.; however, many of these cases are undiagnosed. Many women do not experience significant symptoms – some, for example, do not realize any irregularities until they try to have children, as infertility is a common symptom.

Diagnosis itself is a tricky matter, as was the case with Michael. “It can take up to 10 years to be diagnosed,” stated Michael. “I was process of elimination diagnosed around 17, and that’s only because my mother also had it,” added Michael.

Cases are most reliably diagnosed when a patient undergoes surgery, which can determine the severity, measured from stage one to four. Michael has not received a stage diagnosis, but believes her case is moderate.

“[The symptoms] kind of hit me like a ton of bricks when I was 15,” said Michael, who initially assumed that she was simply experiencing painful cramping like everyone else. “Then I started having to miss school because of it, and I passed out a couple of times.”

Endometriosis is not detectable to the eye, which prevents strangers and friends alike from knowing that someone suffers from the condition. “It’s an invisible illness, and so because of that, a lot of people don’t believe in it … when I have to use my cane, people are suddenly like, ‘What’s wrong?’” stated Michael.

The hidden nature of the condition makes knowledge on it equally scarce – “because it’s so hidden and not discussed,” said Brandan Lurz, Michael’s boyfriend. “It’s so hard for people to be diagnosed and treated by doctors who claim it’s something else.”

Her personal and academic lives have even been impacted by her condition. She has missed class due to being stuck in bed with severe pain.

She has experienced strain in her social life as well. “I’ve had friends not invite me to things and say, ‘Well, you can’t really keep up with us,’” she stated. Others have also doubted the degree of pain she goes through. “There have been people in my life that have said to me ‘I don’t think you’re actually in pain. I think you’re making it all up,’ which hurt a lot and [I] kind of had to sever some ties.”

Michael, however, has learned to live with endometriosis. While self-care, such as using a heating pad, is mostly preventative, Michael has also learned to avoid certain foods and activities, like red meat and taking the stairs, that have caused her condition to worsen in the past. Though her case is moderate, Michael still experiences frequent flare-ups.

“She’s pretty resilient and upbeat for someone who experiences unthinkable pain quite regularly, so that’s admirable,” added Michaela Rankin, a close friend of Michael’s.

Michael said she is fortunate to have the support of others, such as Lurz. “My condition has definitely deteriorated in the past two years, and [Brandan has] been a rock for me, so I’m just thankful that he’s been with me through it.”

Michael has also found support through guiding others. “I’ve met so many people [at McDaniel] because I’m so vocal about it. They’ll come up to me and say ‘I think I have this too, what should I do?’” Michael said. She has been able to bond with others as a result, even if it is just through venting together.

“I’ve seen Kat help many other women recognize the possibility of having endometriosis by discussing and comparing symptoms,” said Lurz. “She is able to form a bond with other women who also experience the pain.”

Rankin sees inspiration in Michael’s handling of her condition. “Perhaps endometriosis sufferers’ constant pain is not something to pity, but instead something to be in awe about for how amazing it is that such resilience can exist in a human being that they’ll anticipate pain in the future but continue doing what they need to daily,” Rankin reasoned.

Despite her chronic pain, Michael manages to keep an upbeat attitude in all that she goes through. “Some days she might have to use the elevator instead of the stairs or take the long way to class, but Kat always smiles and is always friendly and happy, despite her condition,” Lurz said. “Her life continues because she makes it continue as best she can.”