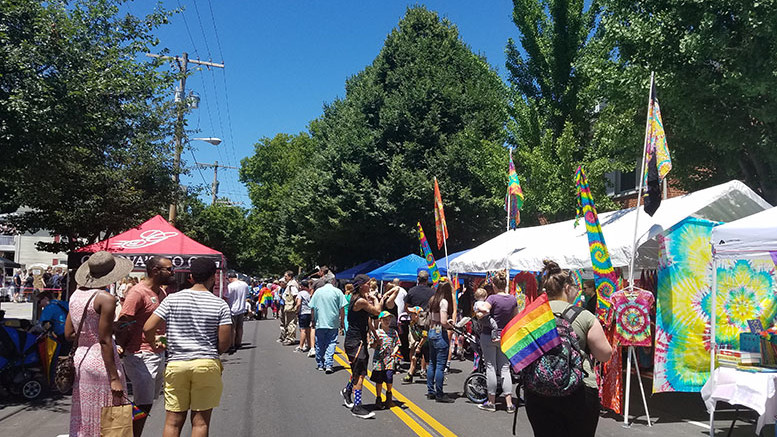 Preparing for Westminster’s Pride Festival, McDaniel senior Alex Maragos was not anticipating a large event. She packed some sunscreen and an extra water bottle, but did not plan on staying too long.

“I wasn’t expecting a lot because it was Westminster’s first ever Pride,” said Maragos, “but I was blown away by the experience. Everyone was so friendly and accepting and it was so amazing to be in that atmosphere.”

This past Saturday, the city of Westminster blocked off East Main Street to hold its first ever Pride Festival. Local businesses, political candidates, and various nonprofit organizations set up booths along the street to offer resources, support, and celebration for members of the LGBTQ+ community.

The event was a safe space for festival goers to express their sexuality and gender identity while enjoying music, food, art, and local vendors. Several organizations such as PFLAG, Rape Crisis, LifeBridge Health, and Carroll County Health Department offered educational materials and other resources for both mental and sexual health.

“I think this was huge for the LGBTQIA+ community living in Carroll County, because it gave them a platform to express themselves,” said Maragos. “And especially for people who are questioning, it gave them a great environment to explore their identities and be around people who are confident in their own sexuality.”

The festival committee loosely kept track of attendance by passing out stickers with the Westminster Pride logo. Within the first hour, nearly 1,500 stickers had been distributed.

“It’s more than we expected. I’m so happy,” said Garber.

Before the event, Garber had said he hopes “that this festival opens the eyes of this town. We want people to know that we are here, we matter, and we will not be going away anytime soon.”

Following Saturday’s festivities, feedback on their Facebook page has been overwhelmingly positive.

Maragos also left feeling satisfied. Although she will be graduating this year, she hopes to return to Westminster for next year’s festival.

“Based on the turnout and how much everyone seemed to be enjoying themselves, I think this has a chance to really become big,” said Maragos. “I’m really excited to see what happens next year, and if they eventually start a parade.”

And with support from local politicians, businesses, the police department, and the community as a whole, it seems that may become a reality.

“There is absolutely no way that this festival won’t grow to be an annual event,” said Garber. “We want this little one-day street festival to transition to a week-long affair ending in a parade and street festival. I am beyond grateful in the direction that this event is heading in.”

More information about the Westminster Pride Festival can be found on their website.