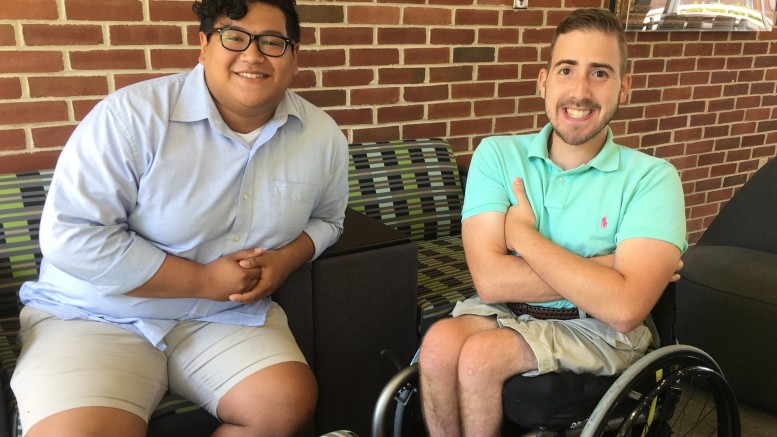 McDaniel’s annual Innovation Challenge is part of the Encompass Distinction Program, a concentration harnessing entrepreneurial skills before and after graduation. Last year’s winners, Justin Arter ’20 and Louis Schaab ’20, with their Ride With Pride idea, were one of five finalists, chosen from a pool of 15 entries. After presenting their proposals in front of a full room of faculty, staff, students, members of the Carroll County community, and a panel of three judges — Kristen Ellis, Kristine Harjes, and Danielle Rowlett Tate — Arter and Schaab were awarded $10,000 for first place.

Since the competition, Arter and Schaab have been working closely with the community to further bring their idea, Ride With Pride, into fruition.

The aim? Provide the Carroll County community with an accessible, reasonably priced and stylish service that changes the way people view transportation for those with disabilities.

Arter and Schaab have since entered two other business competitions: The Carroll Biz Challenge, in which they won 2nd place and roughly $2,000, as well as the Point Breeze Credit Union Community Care Challenge.

As the school year progresses, so do Arter and Schaab’s business plans. As of now, the pair is working on their non-profit status so they can begin accepting private donations by the end of October. Thus far, they have secured a federal grant through the Federal Transit Administration that matches any capital they bring in.

The ARC Carroll County, Inc, an organization that promotes and protects the human rights of people with disabilities, is also greatly helping by offering to provide the drivers with training. Arter and Schaab were pleased to say that Donald Rowe, the ARC’s Executive Director, has really helped them put their “foot in the door.”

Organizations like Target and DORS, the Maryland State Department of Education’s Division of Rehabilitation Services, have also expressed interest in further funding.

Arter and Schaab have also received a great deal of positivity from the community.

“At each of these challenges, Innovation Challenge included, we had so many people come up to us and tell us personally that, ‘Hey we think that’s a fantastic idea.’ It means so much more when other people — other strangers — tell you that they think your idea is a great one,” Schaab voices. Arter adds, “People have come to us for help and think we are the answer.”

Another important component of Ride With Pride is an active effort to break the stigma of,  in Schaab’s words, “the proverbial short bus.”

“Every business needs their ‘thing’ that puts them above all others… If you think about a handicapped vehicle, you typically think about a minivan. It’s obviously very practical, but there hasn’t really been anybody thinking outside of that. If we were able to start using non-traditional vehicles like SUVs, it would take away that stigma.” Think Jeeps in terms of coolness.

Arter and Schaab plan to keep costs low, and one solution is to bring in student volunteers by early next Fall. While Ride With Pride is an opportunity for the community, it is also a chance for McDaniel students to get involved and contribute to a meaningful cause.

Associate Dean of Student Academic Life Lisa Breslin initially inspired Justin Arter to look into better transportation for handicapable people. One of Breslin’s friends at DORS had a client, a handicapped student in a nearby community college, in need of viable transportation who was denied service from the Carroll Transit System.

There is little transportion help outside of the Carroll Transit System: the sole private transportation entity available provided listed daily costs at over $70 a day, over $5,000 total for the semester. Breslin, ARC Carroll County, and DORS examined the issue and decided to bring a raw idea of Ride With Pride to younger students who can move the solution forward with dedication. Breslin reached out to Arter, who then reached out the Schaab, and the two began making the idea a reality.

Zach Fortuna, the creator of D1V3RG3NT, an all-purpose tailgating table that secured second place in McDaniel’s Innovation Challenge, gained similar skills in entrepreneurialism, as well as personal and professional growth. A junior from New Jersey, he notes that the dialogue and feedback he received from everyone has been invaluable.

“Before the competition I didn’t have any real experience in the business world, and was honestly pretty nervous about what I wanted to do after graduation. The best advice I could give absolutely anyone is to go out there and just go for it. After coming in second place and winning the $5,500, I used it toward my business and different conferences in an effort to learn as much as I could this summer.”

Long before receiving their undergraduate diplomas, these McDaniel students are encouraged to use their entrepreneurial prowess in real-world experiences, network with experts in their fields, gain insight into the business world, and jumpstart their careers.

“For most students, when they come to college, they don’t have an exact, clear idea of what they want to do after school,” Schaab adds. “The Encompass Distinction made that path more clear for me.”

Political conversations on The Hill