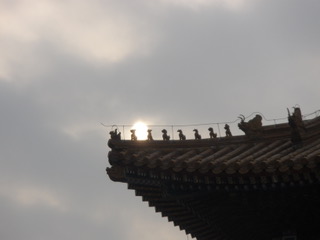 Debra Lemke has always had a natural affection for China, even from a young age.

“When I was a child the National Geographic would come out every month, and the stories I was always interested in was the stuff on China,” she said. “Some of my friends say I must have been Chinese in a different life.”

The Cultural Excursions: China course is taught by Lemke, a professor of sociology at the College. Three years ago, McDaniel decided to add a new course that was designed to help educate students on cultures and other ways of life different from those of their own.

Lemke received her Ph.D. from Iowa State University. She made her way to McDaniel College when the school was looking for a theorist in the field. She currently teaches the research methods and theory classes within her department, as well as Wealth, Power, and Prestige, alongside Cultural Excursions: China.

Lemke has been to China four times in her life, seeing some of the country’s most famous landmarks and cities.

“I think Shaanxi is my favorite city,” she said. “It houses the Wild Goose Pagoda and the Terracotta Soldiers. I love that ancient part of China.”

Lemke’s appreciation for the country has not gone unnoticed by her pupils.

“She is passionate for sure about China,” said Michelle O’Conor, a student of Lemke. “She generally enjoys teaching the class, which is nice to see.”

Lemke got the idea to start the Cultural Excursions: China course after a few of her students approached her and were enthusiastic about wanting to learn more about China and its culture. For a while she taught a course titled Along the Great Wall. That class, mainly intended for sociology majors, focused heavily on China from a sociological perspective.

More recently, Lemke has transformed the course into what we see today, with less of a focus on sociology and more on China, its culture, and its rich history. Topics covered in the course include the history of China, its different provinces, and the practices and beliefs of the people who call China their home.

One requirement of the course is that each week students get to choose an article from a Chinese newspaper and explain how it relates to class.

“I really just want them to have an appreciation for a culture that most people don’t get exposed to,” Lemke explained. “China is something to appreciate, not something to fear.”

As of 2018, China is currently one of the largest markets in the world. Lemke believes that this class may help students become used to a culture that they may have to work with in the future.

“It’s something that I never really looked at before,” O’Conor said of Chinese culture and history. “And I’m excited to see what new things I can learn.”