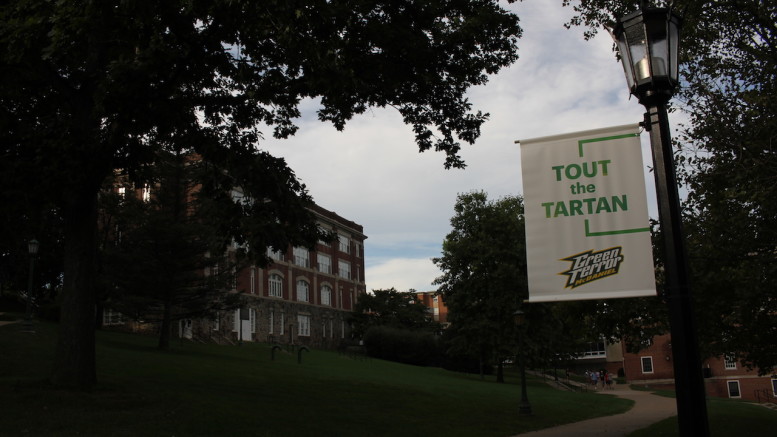 As students walk around campus this semester, it is easy for them to see that McDaniel College made some changes in ways to showcase school pride.

These banners are a new way that McDaniel is branding the College. Some of these banners have quotes such as “Tout the Tartan” on them, while others showcase different McDaniel students.

Naturally, students have been wondering what the purpose is of having these banners around campus.

“They look okay, but I don’t understand why they are all over campus,” said Kevin Keane, a junior. “They are hard to understand. What does ‘Tout the Tartan’ even mean?”

“’Tout the Tartan’ is a rallying cry for showcasing the McDaniel colors of green and gold,” she said. “The tartan plaid is a way to represent those colors in a new and compelling way.”

The tartan also refers to the school name’s Scottish roots.

“We decided that we really needed to fully embrace all of the trappings that ought to go with a name like McDaniel,” said McDaniel President Roger Casey in an interview on Aug. 24. Before the rebranding, he noted, there was almost nothing on campus that reflected this. On that account, McDaniel adopted the tartan – a traditional Scottish plaid cloth, often seen on kilts – in the school colors.

The new signs are part of McDaniel’s new “BECOME” campaign, which is based on how McDaniel wants to inspire students to become the best students and people they can be, no matter what they are striving to succeed in.

Last year, the signs around campus were all about showcasing how it was the 150th anniversary of the College. With this no longer being the case, it was an appropriate time to change it up and unleash the new brand.

Not only is the new brand on signs around campus, but it is also going to be in advertisements in newspapers such as The Baltimore Sun and the Carroll County Times. There will soon be billboards with the new brand as the headline put up on Md. 27, 30, and 140.

Most of the recruitment of new students to McDaniel starts through the mail and at places such as college fairs and it utilizes the new “BECOME” brand. So, the effort is much more than just a few signs on the campus’s light posts.

There was a lot of effort put into getting the new branding up, including the school working with Ohio-based company Ologie. The entire process of developing the branding took around a year, and the effort was worth it, according to freshman Adam Gibbs.

“The signs look good,” said Gibbs. “You can tell it took a lot of effort.”

Emma Carter contributed to this article.