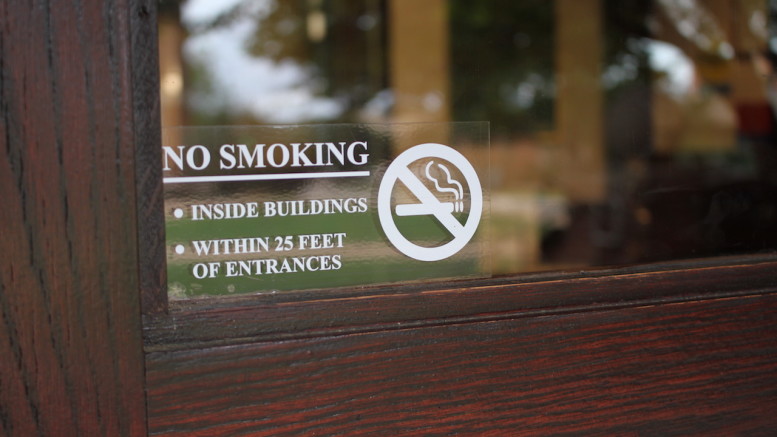 According to the Center for Disease Control and Prevention, cigarette smoking causes about 480,000 deaths every year in the U.S. As scientists learn about the negative side effects of smoking, more and more colleges have decided to ban smoking on their campuses. Smoke-free and tobacco-free college and university campuses have more than doubled from 2012 to 2017. Towson University went smoke free about eight years ago, and Goucher College just made the change this fall.

So why hasn’t McDaniel made the switch?

McDaniel’s current smoking policy forbids smoking “of any kind, including e-cigarettes and all other electronic smoking devices,” within 15 feet of any building.

Not only would going smoke-free help limit the social acceptability of tobacco use, but it would also protect non-smokers from secondhand smoke. According to the CDC, most smokers start smoking before the age of 26, which makes implementing smoke-free campuses even more important. Although cigarettes are being replaced with more popular alternatives such as vaporizers, electronic cigarettes, and hookah, those too can have serious health side effects.

“A lot of them have toxins in them that cigarettes don’t have, so you’re still spewing chemicals and things into the air and other people are having to breathe it.”

“Smoke is smoke,” she said. “[A smoke free campus is] very important for the health and well-being of students. You don’t want to encourage smoking, or the exposure to second-hand smoke and how dangerous that can be for people who don’t smoke.”

However, if McDaniel ever does decide to become smoke free, it would be a major process.

“Transitioning to a smoke-free campus would be a decision made at the level of Dr. Casey and the various vice presidents, probably with input from SGA, the Faculty Senate, and the Staff Advisory Board,” said Associate Dean of Students Michael Robbins.

Both Towson and Goucher took years to make the shift because of the pushback from the small group of students who do smoke.

“I’ve heard of other campuses really having some difficulties implementing it because it’s a huge change, and there’s often push back,” Bock said.

Freshman Henry Hayden would be against McDaniel going smoke free.

“I like to smoke,” he said. “I wouldn’t like a smoke-free campus because I would have to walk all the way off campus when I can easily just smoke here.”