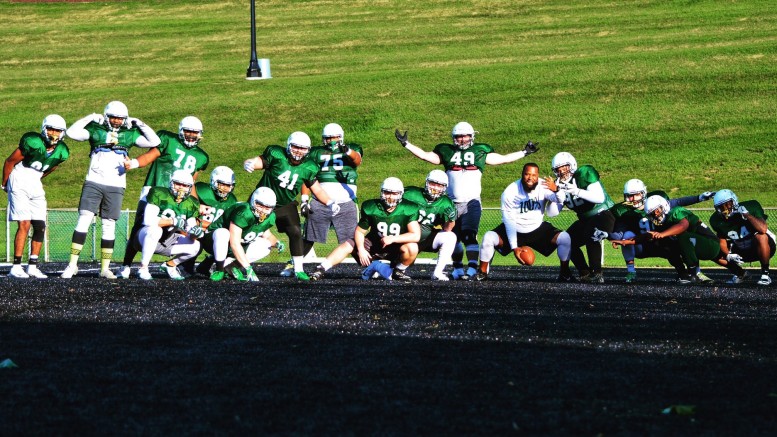 I thought it appropriate to write you in response to your recent article, mostly to set a few things straight about Division III sports and especially the McDaniel football program. I appreciate the thought you put into this article, but it is rather evident that you are somewhat uneducated on the facts in this area.

First of all, I am at a loss to reconcile your title with the rest of your article. You say that if academic programs are under scrutiny, athletic programs should be also, but then go on to only attack our football program. Perhaps this is because football comprises the largest number of student-athletes at McDaniel, or perhaps it’s because football is the most talked-about sport in America in this day and age. Regardless, your article doesn’t address at all the positive things that football brings to McDaniel (which I will address throughout my response), nor does it speak to solutions regarding all sports at McDaniel. In short, it seems that your title is merely an attention-grabber for a chance to slander the football team.

Secondly, I want to address your general lack of understanding of how Division III sports work in general, and the way athletics and football are funded here at McDaniel. For example, you state that the football team gets “undisclosed amounts in scholarships,” but it is widely known that Division III athletes do not get athletic scholarships. Furthermore, the “multi-million-dollar stadium renovation” that you speak of was given through a donation to the school specifically for the stadium. It wasn’t just for football but also for all of our other outdoor sports programs. Every team except men’s and women’s soccer uses that turf stadium for both practices and games (and by the way, soccer uses their grass fields that also came from—guess what—a donation). Even sports that don’t use the field for games such as baseball and softball use the turf to conduct practice when their fields are unplayable. I would also like to point out that the turf field is open to the community for use when McDaniel sports aren’t practicing. So that donation goes even further to benefit not just football players, but also our community at large. Almost everything purchased for the football team is bought using money that comes from donors giving specifically for the football team, which then goes to also benefit other sports on campus. If you don’t have football, you don’t have those donations.

You also mention the thousands of fans that we get year-in and year-out, which seems counterintuitive to me. If you look at the statistics, we have actually gained more fans in the past few years, including posting a historic 15,000-person attendance to our homecoming game in 2017. We average between 3,000 and 4,000 people per game, and yet your thought is that students and alumni can gather around “less physically harmful sports.” People want to see football. As much as I love going to watch my fellow student-athletes’ games, our community, our student body, and our alumni are all excited about McDaniel football games. There’s something about football that draws fans, and that’s a good thing! As for the physical toll it takes on our bodies, as someone who has dealt with major injuries and multiple surgeries, I would do it all again for the sport I love. So would any one of my teammates. We came to McDaniel because it gives us a great opportunity to pursue high-level academics and play competitive football—injuries and all. We don’t feel exploited by McDaniel; we’re happy to volunteer our “bodies and minds” for our sport and our family here on the Hill.

You claim that we have “gotten away” with our record for far too long, and yet you ignore the fact that McDaniel fired the previous football coach only three years ago. If you look at any rebuilding team, you know that it takes at least three years to make any kind of difference due to new recruiting, developing players, etc. That being said, this year McDaniel has the number one defense in the Centennial Conference through eight games, after being last in the conference before the new coaching staff was put together. While it is true that our record doesn’t necessarily reflect our improvement to the extent that we’d like it to, statistics and scores show that we’re far more competitive in games over the past three years than we had been in the five years before the coaching change. If nothing else, this proves that McDaniel football is on the incline.

You also argue that McDaniel could save an “unknown” amount of money by cutting the football program to reallocate money towards scholarships and academic programs. However, it would in fact be less productive for the college to do this for one huge reason: over the past 27 years, for football players who have stayed in the program all four years, only three players have not graduated. That’s a 99% graduation rate for football players. Few scholastic programs boast such a high graduation rate, regardless of how much money is pumped into them. One could even claim that McDaniel’s investment in the football program is really an investment in its future graduates.

Finally, McDaniel’s academic mission is supported by its athletic mission. As football players, we are consistently pushed by our coaches and our faculty adviser (the esteemed Dr. Gretchen McKay) to strive for greatness both in the classroom and on the field. You could argue we are more motivated to keep good grades than the average student because we have so much more to lose. If we don’t perform in the classroom, it can end up taking football away from us permanently. We push ourselves to be the best in the classroom so we have the opportunity to be the best on the field. In this way, athletics support the academic mission of the college.

In no way do we feel that we have a singular claim to the Green Terror identity—in fact, we want all students at McDaniel to have the spirit we work so hard to embody. McDaniel football doesn’t hold claim to that identity, but we do feel that we enrich it and provide a more spirited environment for our peers. It is our goal to live out that spirit on the gridiron.

Editor’s note: opinions expressed in the Commentary section do not necessarily reflect the opinions of the Free Press nor McDaniel College and are solely representative of their respective authors. All readers are encouraged to submit their own response to any article.

New York Will Be Giant Task for Patriots