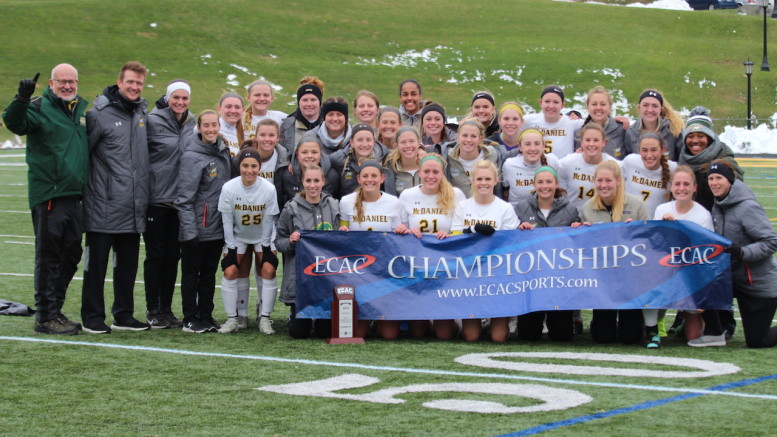 Bringing home championship hardware came on the heels of a dominant season from the Green Terror. After Sunday’s win, the team concludes the season with a record of 14-5-1.

“I am delighted for them,” McDaniel College President Roger Casey said. “What a great group of women with a phenomenal coach…it is great to see them win on our home field.”

Senior forward Kirsten Gibson led the Green Terror in scoring. The first goal came at the 28-minute mark, giving McDaniel the lead. Albright responded with a goal of their own minutes later from forward Lauren Haley, tying up the contest.

Both sides would remain tied until later in the second half with Albright forward’s Diza Hasanaj putting Albright up 2-1. Minutes later, the Green Terror’s Maddie Schwartz, a sophomore midfielder, responded with a headed goal from senior Alyssa Johnston’s corner kick.

With the game time ticking away, both sides pursued the game-winning goal, but the Green Terror ultimately secured it. Gibson rebounded one of her own shots on goal and slid it by Albright goalkeeper Alexis Tunney in the final minutes of competition. 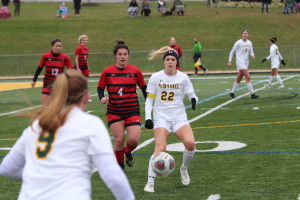 Gibson’s two goals led McDaniel to victory. It was an ideal way for the senior to conclude her soccer career on the Hill, said the forward.

“It was the best feeling and way to end my career and season,” Gibson said. “It was just a really great experience and I could not have done it without my teammates. I am so proud of everyone.”

Despite cold weather conditions, the McDaniel community rallied around the women’s soccer team to support them during competition and celebrate the victory.

“The school has been waiting on this for a while,” Campus Safety officer and women’s soccer fan Don Carter said. “I am really proud of the girls.”

Along with the ECAC trophy does come the end of college playing careers not only for Gibson and Johnston, but seniors Jo Rice, Marissa Funke, Annie Marshall, Rachel Engle, and Lindsey Farrell.

“I am really proud and excited for the seniors to be able to end their careers like this,” Head Coach Sandy Lagana said. “They have been so instrumental to our success and to give them a championship – there is no better way to end their career.”

Being a champion is rooted in the work and dedication before the big win, and this rings true for the women’s soccer team. 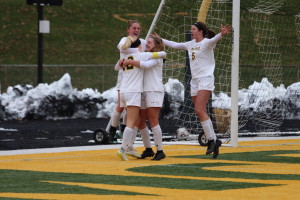 “We worked so hard for this, and I’m just really proud of us and all the work we put in this whole season – ups and downs we had, we just kept fighting it out,” Gibson said. “We deserve this today.”

Taking on the title of ECAC champions is a culmination of talent, effort, work ethic, and teamwork for the Green Terror. The team’s potential was even recognized as early as last season.

“I told them last year that they were going to do something special this year,” Carter said. “I will always believe in them.”

Having the support from the McDaniel College community throughout the entire season further shows how much of an impact the community really has on the Hill.

“It is nice to have all the support,” Lagana said. “It makes it all the more special to share [the win] with friends and family.”