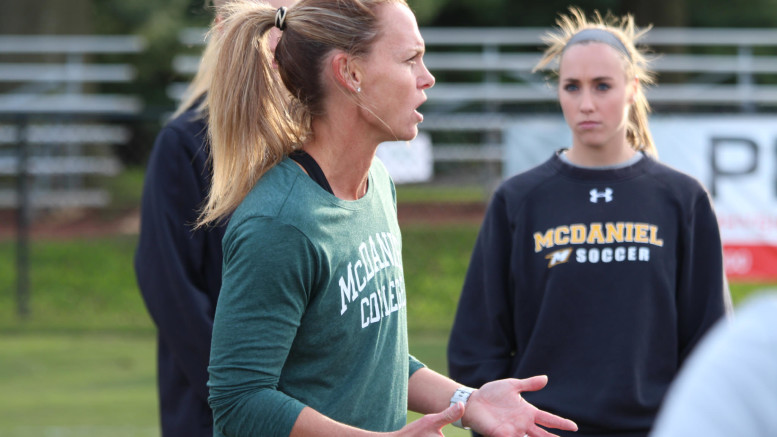 Pearce’s visit to campus began with what she knows best, soccer. Offering a once in a lifetime opportunity to the women’s soccer team, Pearce hosted practice with the Green Terror to share her extensive knowledge of the game.

“At first we were all really nervous,” sophomore and forward player Kat Dixon said. “This woman is a world cup champion and gold medalist and we are just these division three soccer players, we didn’t know how to train with her.”

Despite the list of achievements, Dixon added that Pearce could relate to the team as she too was once at a small university, attending Monmouth College in her home state of New Jersey. However, Pearce’s athletic journey began in her youth.

“When I was younger I was a pure athlete,” Pearce said. “I played soccer, basketball, ran track, [and] played field hockey. I did not identify with one sport.”

Being dubbed as the best athlete to hail from Ocean County, New Jersey, Pearce was finding success not only in soccer as the leading goal scorer for high school conference, but in other sports as well since she also led her conference in scoring for basketball and field hockey.

“I received [scholarship] offers for field hockey, basketball, and nothing for soccer,” Pearce said.

From Monmouth University, Pearce was a walk-on for soccer and through continuous work was called on by the United States Women’s National Soccer Team to attend a team training camp.

Failures and challenges often offer the most learning experience and this opportunity rang true.

“I was told I was not fit enough for the national team, and I was the least competitive person in camp,” Pearce said. “I had to change my mindset and figure how I was going to identify my weaknesses and work on them that way I could make the team.”

The focus on improving and rising from challenge resonated with student-athletes in attendance.

“I feel as though athletes at some time or other are going to face tough adversity and battle through it,” sophomore quarterback Ben Igo said. “Pearce was able to show and inspire me that things aren’t always going to go your way and with a lot of perseverance you can overcome anything.”

From a low-income family in Ocean County to a new member of the United States Women’s national team, Pearce was far from finished with her journey and quickly rose as a leader of the team.

This was culminated when Pearce was named the captain of United States Women’s National soccer team under head coach Pia Sundhage, who stated that Pearce was “the best captain she had ever seen.”

To become a captain is to become a leader, a trait that is defined differently by all, but the impactful leaders can take a team from average to great.

“Being a leader is to be a platform to someone whether they need encouragement or confidence,” Pearce said. “Leadership is not about yourself, it’s about everybody else.”

This was exemplified in the 2004 Olympics in Athens, Greece. Prior to the event, veteran teammates Julie Foudy and Joy Fawcett announced they would be retiring from play.

This would inspire Team USA to rally. The United States would ultimately claim gold against Brazil, sending off Foudy and Fawcett as champions.

“The team was all in and it is more meaningful to win a medal for someone else than it is yourself,” Pearce said.

Ultimately, Pearce would go on to lead the United States Women’s National Soccer Team to three Olympic gold medals and two FIFA world titles before retiring on her own terms in 2017.

Having achieved success on every level of play, Christie Pearce is believed to be an undeniable legend of soccer, but to her, her biggest achievements are reflected in what she did for others.

“I was there to encourage people and make them the best they can be,” Pearce said.

Welcoming Pearce, a woman with international fame decorated with a lifetime of achievement, to the Hill was an experience many will never forget. Having sport and society experience a women’s revolution in recent years, one can consider Pearce a pioneer for how female athletes are recognized today.

“I was starstruck,” junior Desi Sweeney said. “It inspired me to be as humble, mentally tough and perseverant as she is. Christie Pearce is a great model for all women, athlete or not.”