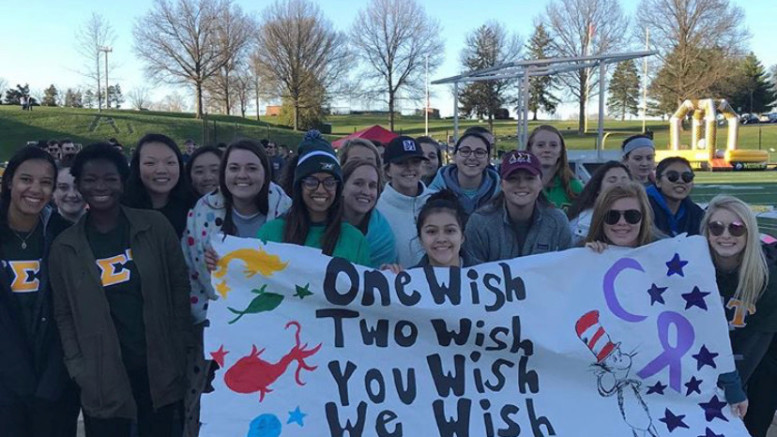 The College will host its annual Relay for Life event on Friday, April 26. The fundraiser brings members of the McDaniel community together to raise funds for the American Cancer Society.

Outside of raising funds, Relay for Life challenges teams to have at least one team member on the track at all times to symbolize the persistent challenges brought on by cancer.

With less than a week remaining until Relay for Life kicks off on the Hill, the 199 already registered participants have raised $14,641.13, topping last year’s total raised funds.

“It is heartwarming,” said Relay for Life McDaniel President Abby Graham on seeing the funds raised. “It makes me so happy that things are coming together and everybody is excited for the event to come.”

Currently, the top individual fundraiser is sophomore Lauren Bass at $546, who is registered with Alpha Sigma Tau, her sorority.

“My family and friends have been so generous and supportive of my fundraising efforts,” Bass said. “It is going to be a great cause, as we all know so many who have been affected by cancer.”

With 13 teams participating from the McDaniel community, the event brings students together to help those in need. Atop the team fundraisers is Phi Sigma Sigma sorority with $3,887 raised.

“Supporting Relay for Life and the American Cancer Society has been a tradition Phi Sigma Sigma is so passionate about,” said Colleen Clark, president of McDaniel’s chapter. “Cancer has touched the lives of so many members and I think that is what makes the difference and ignites our efforts for substantial fundraising.”

Funds raised for the American Cancer Society are used to support cancer research as well as patient care and other programs.

“The McDaniel community is 100 percent all about [Relay],” Relay for Life McDaniel Treasurer Allie Lugar said.

Recently, cancer has again had a direct impact on the McDaniel community as McDaniel alumnus Spencer Wiersberg is in the process of battling bone cancer.

Wiersberg was a member of the football team while at McDaniel. Since his diagnosis, social media activity has helped lead to a collection of supporters known as the Wiersberg Warriors, who actively raise awareness on the impacts cancer can cause.

Those who have supported the Wiersberg Warriors with clothing purchases are encouraged to wear gear to Relay for Life.

The greater Westminster community has also been active in bridging the connection to Carroll County cancer survivors.

“This year we will have 15 cancer survivors [joining] from other Relays happening in the area and Carroll County,” Graham said.

Community sponsors have also involved themselves with this event with a $1,000 donation from Kohl’s toward McDaniel’s overall fundraising goal.

Though continually walking is the main feature of all relays, there are other incentives to keep participants engaged.

The mechanical bull will be making its return and minute-to-win-it games will be used to give away sponsored gift cards from local ice cream shop The Cow. Other prizes include Relay for Life gear.

“It should be really fun,” Graham said. “We have a lot planned.”

The Hispano-Latinx Alliance will be instructing a Zumba course, too.

Ultimately, organizers see Relay for Life as an opportunity for the McDaniel community to give back to those who have been impacted by cancer and to create a community support network.

“Relay raises awareness and money and brings everyone together to show that no one is not touched by [cancer],” Lugar said. “We are one big happy family.”

Campus Announcements Gets a New Look