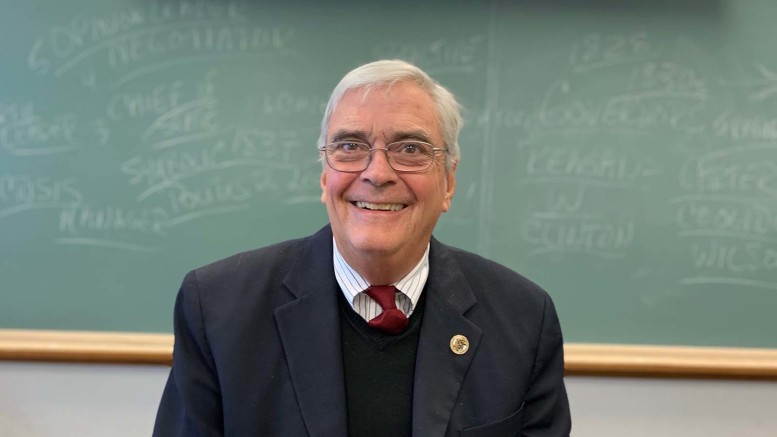 Professor of political science Herb Smith, Ph.D., retires at the end of the spring 2019 semester after nearly five decades of changing lives on the Hill.

“Is that a trick question?”

Herb Smith, Ph.D., is retiring after nearly 50 years on the Hill and he’s enjoyed his time too much for us to ask.

Smith, who began teaching in the political science and international studies department at McDaniel in the fall of 1973, says that he could count the number of bad days on one hand.

“I got to do what I wanted to do, which is immensely satisfying,” he said.

His fondest memory comes from teaching the U.S. Campaigns and Elections course in 2008.

“I publicly tore up the syllabus after two weeks,” Smith said.

The class was so popular 15 people audited it which made for an outstanding group, he said.

But his achievements are a little harder to pin down than his memories. One of them is being able to teach through relevant and practical assignments that help students connect to their future and prepare them for the assignments of the 21st century, Smith said.

“My achievements are micro,” he added.

Away from the Hill, Smith is also proud of his lobbying on behalf of the College in Annapolis, Md. and Washington D.C.

Another of Smith’s accomplishments is his co-authoring of the book “Maryland Politics and Government: Democratic Dominance” which he wrote with John Willis and was published in 2012. It became the backbone of his State and Local Government course, his favorite to teach.

“I get a royalty,” he said of every purchase students make when buying the book for his class.

Smith has also been powerful in bringing speakers to campus, many of whom held office or were running for office. Former Maryland Gov. William Donald Schaefer and Gov. Larry Hogan are just two of the more than 100 that stand out to Smith. Schaefer visited in 1986 as a gubernatorial candidate where students gave him a standing ovation as he toured through Glar. Hogan made the trip in 2014 to talk about state funding for private colleges.

Not free, however, was Smith’s regular Jan Term trip to Belize which ran for 15 years until the last trip in 2012. As many as 30 students would join him on a trip to San Pedro to explore the local culture.

Smith’s care for his students, like providing a fun-filled Jan Term, was enhanced by his experience as a father. Becoming a parent, he said, helped him realize that each student is someone’s child.

Once his retirement is finalized, Smith plans to enjoy his time on Pine Island, Fla., where he lives with his wife, gardening, playing tennis, fishing, crabbing, and boating.

After 46 years, it’s the people at McDaniel that Smith will miss the most, from his students to his supportive department and amazing colleagues.

“Optimism is a great force multiplier,” he said as a final thought to these people. “I try to pass that along.”

Atticus Rice contributed to this article.