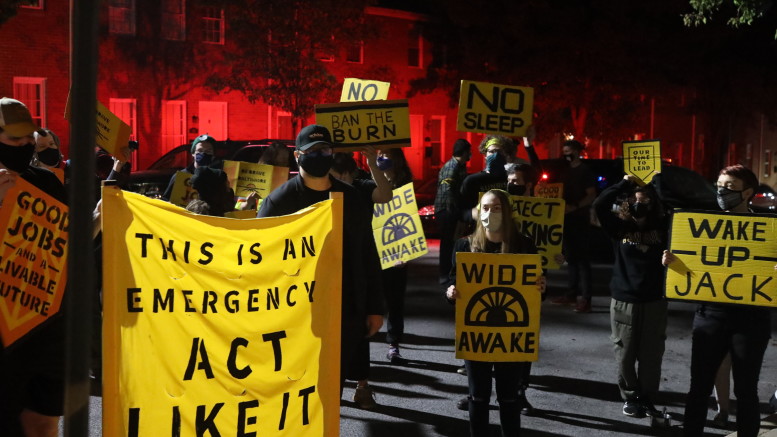 Rising before the break of dawn, the movement group Sunrise Baltimore and aligned organizers stood outside the house of Mayor Bernard C. “Jack” Young, demanding he wake up to the nightmare of trash incineration and put the dream of the Wheelabrator trash incinerator to bed.

In his last two months of office, it is rumored that stand-in Mayor Young is planning to extend the Wheelabrator contract, currently scheduled to end in 2021, against the wishes of the City Council and those subjected most to the impacts of trash incineration.

Organizers gathered at 5 a.m. on the chilly Oct. 10 morning to distribute signage reading “Green New Deal,” “Wake Up Jack,” and “Wide Awake.” Most prominently, a large banner, “This is an emergency – act like it” was assigned to be carried at the front of the group. The well-organized team equipped itself with identifiable police and press liaisons, videographers, photographers, and action coordinators.

Around 5:15 a.m., the group walked silently down the street to the Mayor’s house. Upon arrival, their first course of action was passing out letters to the neighbors that included an apology, why they were there, and who in the group will answer their questions.

In front of Mayor Young’s house, attendees delivered passionate speeches about the health consequences and disproportionate impacts on lower-income communities, the lack of economic and energy productivity of trash incineration, and the effects of allowing the incinerator to remain open on policy initiatives. Speeches were followed by chanting and songs.

The South Baltimore Community Land Trust, Clean Water Action, Franca Muller Paz for district 12, United Workers, and many others joined Sunrise Baltimore at this action and with their tireless efforts throughout many years. The citizens of Baltimore have been fighting against the consequences of toxic air emissions from the Wheelabrator trash incinerator for decades.

The adverse health consequences are well documented in medical and scientific literature. Exposure to toxic air emissions correlates with decreased lung function and increased asthma and heart attacks, increased hospital admissions in the affected area, and results in increased death.

Trash incineration is touted as a solution to mitigate methane, a greenhouse gas released from landfills; however, landfill methane can be virtually eliminated if people simply compost their food. Additionally, according to EPA data, the Wheelabrator trash incinerator is 427 times more air-polluting than the Quarantine Road Landfill in Baltimore.

As recorded in the EPA’s National Emissions Inventory database, Wheelabrator is the largest air polluter in Baltimore, responsible for 36 percent of industrial air pollution.

Trash incinerators, like Wheelabrator, often describe themselves as “waste-to-energy,” which is an unscientific term. “It is not physically possible to turn matter into energy without a nuclear reaction. Trash incineration merely turns trash into toxic ash and toxic air emissions,” writes ‘Clean Air Baltimore,’ a campaign working to replace waste incineration with zero-waste jobs.

Since the action, City Council president and likely incumbent Mayor, Brandon M. Scott, who once echoed the wishes of City Council, has backtracked on his campaign promise and now favors extending the contract with BRESCO.

“It’s not as simple as saying we don’t want to do business with them anymore because others still will burn their trash there, affecting our air,” Scott said.

Baltimore city is responsible for 62 percent of the trash being burned at the BRESCO facility. Losing the majority of its trash supply would force the incinerator to shut down – mitigating detrimental health effects on the community from the persistent trash burning.

Scott was expected to advocate for the shutdown in two months.  In light of his new revelation to extend the contract, the fight for clean air seems to be far from over for the citizens of Baltimore.

“Whether it’s five more years or five more days of having this incinerator, it’s going to continue to poison our families,” said Muller Paz.