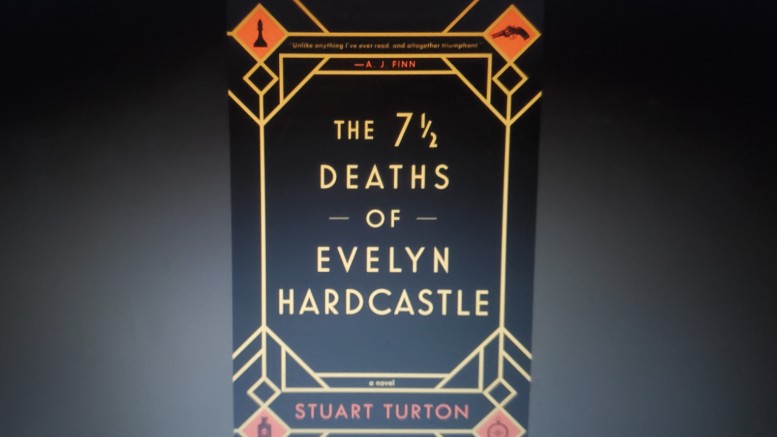 Tonight, Evelyn Hardcastle will die. It’s up to Aiden Bishop to find out why.

The “7 1/2 Deaths of Evelyn Hardcastle” by Stuart Turton follows the story of Aiden Bishop, who wakes up in the body of Dr. Sebastian Bell in the middle of the forest. He quickly learns that he is trapped at Blackheath Manor, cursed to repeat the day until he discovers who kills Evelyn Hardcastle every night.

The catch is that if the night ends without him catching the killer, he switches bodies with another visitor to Blackheath. To up the stakes, he only has 8 days before the cycle resets and his memory is wiped. In addition, he isn’t the only one trying to solve the mystery.

This book was a trip from start to finish. Just to start, if you’re a reader particularly sensitive to reading about fatphobia, sexual assault, and violence, this one probably isn’t for you. While these topics are covered, I personally found that they could have been handled far better by the author.

One of my biggest complaints is in that of all the different hosts inhabited, there isn’t much to distinguish them other than names and the differences in their bodies and minds. All are adult men, most of them of some status, and nearly all of them intensely dislikeable. The author does a decent job in making physical and intellectual barriers unique to the host as well as personalities and motives. However, the book would have been far more interesting with a wider diversity of hosts.

With the constant jump not only between bodies but timelines and days, the plot can also be incredibly difficult to follow at times. It is not the light read I was expecting in that it took a great deal of concentration to keep the throughline of the story. There’s also various elements that could use better explanation, especially as far as the rules of the realm and the background of the narrator. I don’t want to say that I hated this book; it had a rich atmosphere and the author clearly put a lot of effort into crafting the mystery. However, this is probably one I’ll only read once.

I will say though, this book had some hard-hitting lines. Favorite quote is a tie between “Too little information and you’re blind, too much and you’re blinded” and “How lost do you have to be to let the devil lead you home?”

The “7 1/2 Deaths of Evelyn Hardcastle” is Stuart Turton’s debut novel. It was published on September 18, 2018 through Sourcebooks Landmark and is available wherever books are sold. Sturton’s newest novel, “The Devil and the Dark Water,” was released last month if you’d like to read more of his work, or you could visit his blog at stuturton.wordpress.com for some of his travel writing and short stories.