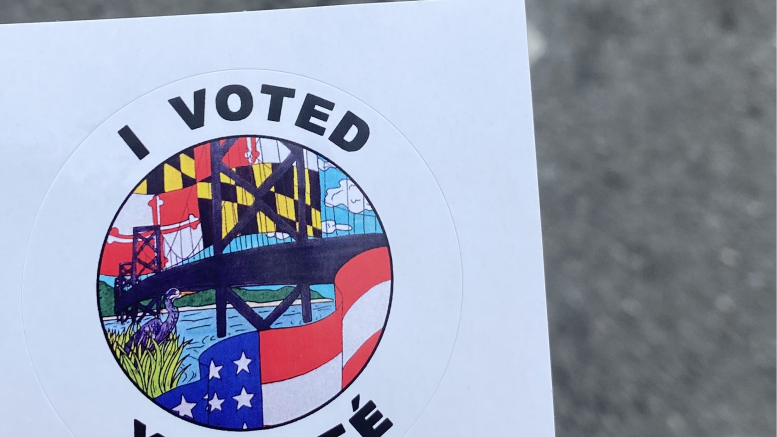 The 2020 presidential election was the first time many students at McDaniel College were able to vote. First-time voters in this election say they felt empowered and proud after voting. Students understood the importance of voting and urge more of the younger generation to vote in future elections.

Some students chose to vote in person because they felt more confident their vote would be counted as opposed to voting by mail.

“I voted in person because I wanted to make sure my vote was in, I did not want it to get lost in the mail,” freshman Kai Cummings said.

Freshman Ellie Glass also felt more confident about her vote being counted by voting in person.

“I voted in person because I wanted to do everything I could to make sure my vote was counted,” Glass said. “Physically handing in my ballot made me feel confident that it was getting to the right place.”

The pandemic caused some fear amongst voters. Some people decided to vote by mail to avoid public exposure.

“I voted early,” Glass said.  “I only waited about 45 minutes in line at my local election office. Everyone was socially distanced and wearing their masks. I felt safe voting in person; it was an overall great first [voting] experience.”

Students who decided to vote by mail still had a good first-time voter experience.

“I voted via an absentee ballot because I was not comfortable being around people,” junior Danielle Wendt said.

Wendt says waiting for her ballot was tough, but when she received it the process went smoothly.

“It was a little nerve-racking to wait to receive my absentee ballot because of the lack of funding for the postal workers,” Wendt said. “But once I got my ballot, it was easy to fill it out and drop it off in a drop-off box.”

This was the first presidential election students have voted in, which brought many positive feelings for the younger generation.

“It felt powerful,” Wendt said. “With everything that has gone on this year, I liked knowing that I did my part and made my voice heard.”

Glass also said she felt good about voting. Her first vote made her feel like she was a part of something important.

“I was so thrilled about voting in my first presidential election,” Glass said. “It felt great to use my voice and to have a say in what our country’s future is going to look like.”

Students understand the importance of voting and hope their peers do too.

“If someone my age was hesitant about voting, I would say that the only way to make your voice heard is to voice it,” Wendt said.

Wendt understands some people may be discouraged to vote because of the candidates, but she hopes people will still vote no matter the circumstance.

“I understand not liking either candidate but voting helps change broken systems rather than letting them stay broken,” Wendt said.

Senior Cambrie Cooke says voting is a quick action that can make a huge change.

“I would say if someone is hesitant about voting, it only takes a few minutes to do and the outcome can benefit so many people, so it is worth it,” Cooke said.

Glass says people need to understand how the outcome of elections do have an effect on the world.

“If you do not think voting affects you, then I challenge you to look around and put yourself in someone else’s shoes,” said Glass. “Ask yourself how the outcome may impact someone else’s life.

Glass says she has seen people get caught up in their own lives and fail to understand the people in power may affect other people differently than it affects themselves.

“It’s easy to get caught up in our own individual worlds full of privilege, but let’s take one step back and be empathetic to the needs of others,” Glass said.

Glass is happy with how many people her age voted, but urges even more people to vote in the future.

“Your vote could be the difference of a better America,” Glass said.