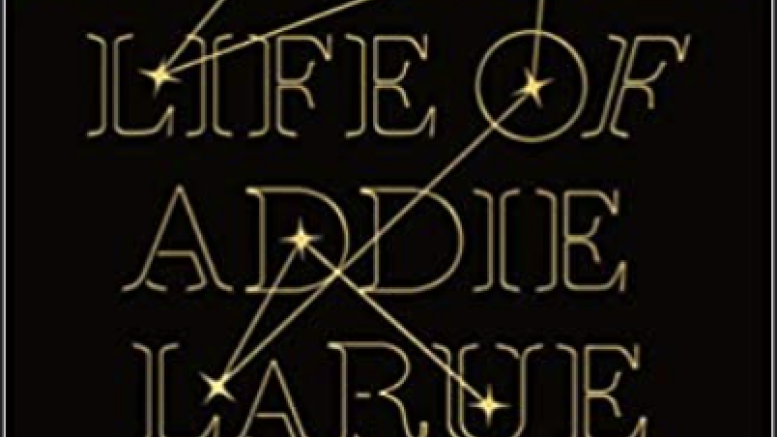 “His hand slides through her hair, comes to rest against the back of her neck, drawing her close. ‘Tell me instead what you want most.’ She looks up. ‘I want a chance to live. I want to be free.’”

The Invisible Life of Addie LaRue by V. E. Schwab tells the story of Adeline, a girl who makes a Faustian deal for her freedom on the night that she is to be wed. In exchange for her soul, she gets the chance to experience life to its fullest without aging or dying. The catch is that she is cursed to be forgotten by everyone she meets.

The story follows the course of 300 years, starting with the French town of Villon in the year 1698 to present-day New York as Addie attempts to make peace with being unable to leave her mark on the world.

Things change, however, when she meets Henry Strauss, a boy working in a bookshop that isn’t what he first appears to be. Meanwhile, she has to contend with the fact that the old god she made a deal with centuries ago might not be willing to let her go.

As someone with a well-loved copy of The Picture of Dorian Gray on their bookshelf, I was excited to dig into The Invisible Life of Addie LaRue.

Admittedly, it had a slow start, beginning both before the deal and before she meets any of the other characters. The story moves in two directions, both forward from her childhood and in the present with the timeframe changing from chapter to chapter. It would be confusing if not for the fact that each chapter gives both the location and year in which the scene is taking place.

Without giving too much away, there is also a secondary narrator for bits and pieces, though this too is made clear by the book itself. I didn’t find that these changes between the speaker, time, and place took too much away from the story as the book does a good job of helping the reader keep it all straight.

For the slow start, I didn’t expect to become entranced once again by the characters and descriptions of the world through Addie’s eyes. “Blink, and half your life is gone,” she says, and it’s true. It’s a gift, then, that the reader gets to experience so many times and places within the novel’s pages.

The novel is broken into books, and before each one is a profile on a piece of art nearly all inspired by Addie. Each one was made by prior lovers without any memory of who the muse for the work was, but were inspired nonetheless by the idea of her.

A repeated sentiment throughout the book is that ideas are so much wilder than memories, that they long and look for ways of taking root. It’s fascinating to see the art Addie inspired and then, in the following book, read about her encounters with each artist and how she left her mark on the world with each one. It isn’t something I’ve seen done and, admittedly, I really enjoyed it.

I could say far more about The Invisible Life of Addie LaRue, but most of why this book drew me in so much was because, for about a fantastical story about an immortal girl, so many scenes felt so relatably human. From Addie feeling torn between her love for her family and her desire for independence, to Henry leaving a party because of a sudden depression he can’t seem to shake.

There’s also casual queer representation, with Addie and others having same-sex relationships without it being an issue or a huge plot point, which is refreshing. I can also say with complete certainty that if you think you know where the story is going, you’re probably wrong. All of this, along with its length, made it a perfect book to escape into on a snow day, and if you too are looking for a fictional getaway for a few hours, I would highly suggest The Invisible Life of Addie LaRue.

The Invisible Life of Addie LaRue is a novel by V.E. Schwab. It was published Oct. 6, 2020 by Tor Books and is available wherever books are sold. You can also find more about V.E. Schwab or explore her other novels and comics on her website, www.veschwab.com.

A review of ‘Velvet Buzzsaw’