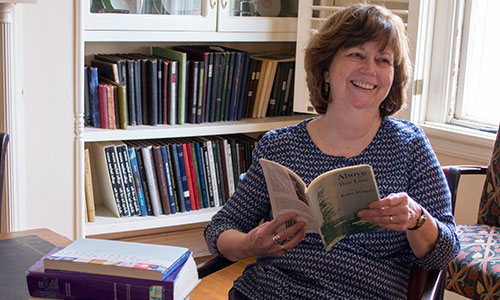 A beloved English professor at McDaniel and an avid poet, Kathy Mangan has been part of the McDaniel community since 1977, when she was hired to teach American literature and creative writing.

She was born in Pittsburgh, Pennsylvania, in 1950, and grew up in suburban Mount Lebanon until moving to New England at the age of 13. She graduated from Denison University with a B.A. in English, and earned her M.A. and Ph.D. at Ohio University.

Mangan’s collection of poetry include Ragged Alphabet, published in 1979, and Above the Tree Line, published in 1995. Many of her works have been selected as part of bigger anthologies or as part of creative writing projects. Such examples are the title poem “Above the Tree Line,” which was awarded inclusion in Pushcart Prize XV: Best of the Small Presses, and “The Whistle,” which was part of the Poetry in Motion series by Baltimore city.

Her poetry is inspired by the everyday and the commonplace, that which everyone lives everyday. Another major source of inspiration for Mangan is the relationships between people, which can be seen fully developed in her poem “The Whistle,” as the poetic voice narrates the interaction between a younger Mangan and her father.