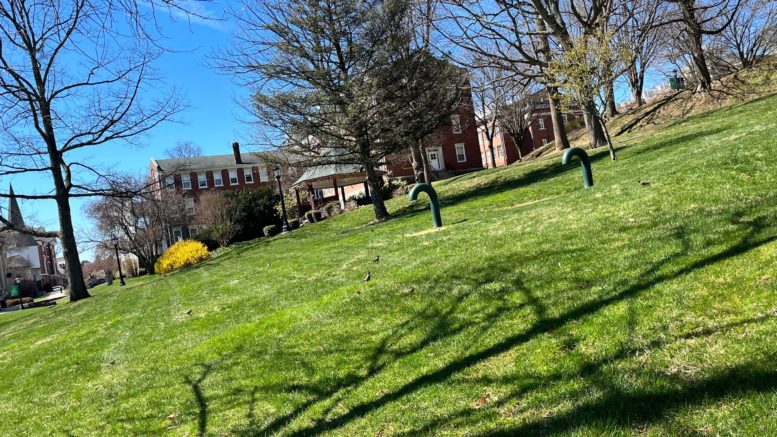 Not feeling as winded as you walk up the hill? Is traveling to class easier on your knees now? Recent reports from the president’s office confirm that McDaniel’s students are not the only ones who like to sled down the hill, but the buildings as well. President Julia Jasken told the Free Press on Tuesday that the buildings are in fact, “slightly shifting down the hill”.

A few students have reported feeling as if their center of gravity is off. Recently, there has been a spike in visits to the Wellness Center regarding shin splints and general disorientation. The spike has encouraged pre-med students to volunteer after class at the center for a greater sense of community on campus and an EXP tag (Link for Sign Up Below). Campus Safety’s monthly report has shown an increase in noise disruptions, damaged bushes, and physical altercations due to falling students. Last week, a fourth-year student claimed to have “lost balance” and then had fallen out of a window from the second floor of Hill Hall. Luckily, the Terror Taxi was driving around campus and was able to safely catch the student, supply them with candy for the emotional trauma, and get them to class on time!

Some students have reported no change in their center of gravity or feelings of imbalance. Allegedly, some of McDaniel’s clubs have decided to use social media to spread the message about the social issues arising. McDaniel’s Green Life posted on Instagram regarding the environmental effects this change could have, but user ‘@BelieveScience372’ replied, “I didn’t feel off balance at all. It’s all these idiots in power making kids get taught about a round earth. If the Earth was round, I would’ve fallen over by now.”

McDaniel’s Swim Team has been posting often on Twitter to delay practice due to needing to refill the pool. McDaniel’s Dining Hall has also posted to the AVI Services website to alert students of the removal of soup from the lunch and dinner menus. When asked about the recent menu updates, a Glar Manager replied, “By removing soup, we prevent future leaks that could create spills. Our job is to provide a safe and welcoming environment for our students, the last thing we would want is someone to slip on chicken noodle soup and get injured.”

Although the shift is subtle, students fear what these changes may hold for the future. Will students be able to focus in class if items continue randomly falling over? Do we have to remove the tour of the dining hall during new students’ visits due to a lack of soup? Will there be a point where we don’t see farther and climb higher?