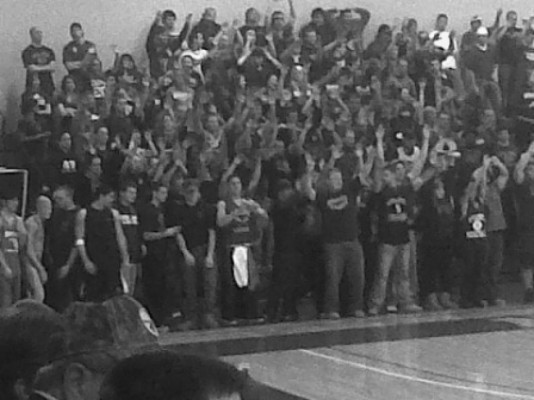 Fans rise to their feet as the home team scores another basket. Fans rise to their feet as the home team scores another basket.

It’s winter time on the Hill again, and while there’s snow on the ground and freezing temperatures outside, there’s excitement and a packed house inside the Gill Center as fans watch the McDaniel men’s basketball team in action as the season presses on.

After last year’s dismal 8-11 season, the team was picked to finish eighth out of the ten teams in the Centennial Conference preseason coaches’ poll. Proving the “experts” wrong, the Green Terror have vastly exceeded expectations thus far and find themselves at 11-9, including 8-5 in conference play. They are currently tied for second place with Gettysburg, and two games behind conference leader Franklin and Marshall. It’s an astonishing turnaround for a team that tied for last place in the conference a year ago with only four wins in conference play.

One of the reasons for the spectacular turnaround has been the combination of new incoming talent with returning talent from last year’s team. “I think that we have some players with another year of experience and it’s also helped that Louis Sarris-Grau has been back after losing him half way through the year last season with an ACL injury. We’ve also added some new faces that have contributed a great deal such as Devon Lesniak, Evan Pupelis and Cullen Murray-Kemp. Right now, we’ve been playing with a great deal of effort on the defensive end, have been playing as a team on the offensive end and have a belief that we can beat anyone.” Head Coach Kevin Curley said.

The new talent is starting to shine. Lesniak leads the team in scoring, averaging 15.2 points per game. Pupelis leads the team in rebounds, and Murray-Kemp is contributing in a reserve role. Lesniak says that the team has picked up on Coach Curley’s defensive mindset.

“Coach preaches defense, so as a team, we all just do what we need to do to help each other and play team defense.”

While all this is very impressive, Coach Curley is reminding fans not to get caught up in all the success just yet. “It doesn’t mean much right now as we still have 6 games to go and it’s an extremely competitive Centennial Conference. We just need to take it one game at a time and be ready every night out.” Curley said.

Lesniak says that to maintain their success, the key is to “Keep playing harder than everyone else we play and keep playing as a team offensively and defensively.”

If the team does that, the 2010-2011 season could be a very special one for the team and the college.