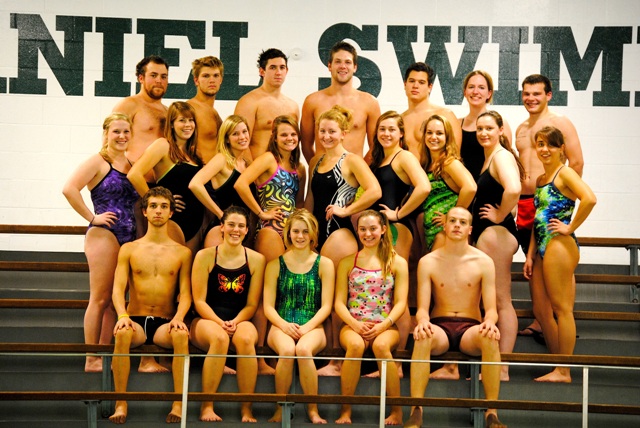 The McDaniel swim team is at a turning point in its history. The change in camaraderie, goals, and confidence on the team is palpable. After seeing great success last season, the team finished only eight points away from the school’s highest score at the championship meet.

Jeff Heistand, who started as the Green Terror swim team assistant coach in 2001, had his first season as head coach last year. Now being well into his second season it’s apparent that he has high expectations for his team.

“If all goes well and as planned we’ll have won a conference championship in 5 years,” Heistand explains.

“I think the team has begun to start to believe that they can win, and beat anyone. And this year they have begun the season with that confidence” said Heistand.

The new season brings promising new freshmen faces to the team. Heistand says of freshman on the men’s side, “Jon Hartzel comes in faster than our school record in the 100 back which not only helps us in the individual event but also in the 200 medley relays. Stevie Hoyt has been training very, very well.”

The Women’s team also gained three new members, all of whom Heistand expects to be valuable swimmers this season. Heistand says Lexie Jacobs “will be a point scorer at champs, and may be sneaking onto one or two of the A relays.” Meg Protzman and Casey McCole are also already showing real potential early in the season.

The freshmen this year are quite ambitious individuals. Jon Hartzel hopes to make nationals this season in the 100 backstroke. Coming in with a time of 54.95 and the nationals cut being 50.7 seconds, qualifying will be no easy feat for Jon. Stevie Hoyt says “Making nationals is a goal for the next four years.”

Casey McCole wants to break six minutes in the 500 freestyle. But with a good coach and hard training the team believes they are capable of any goal.

“I swim because I just find this different love for it and respect it more than any other sport,” she said.

Lexie Jacobs explains that swimming is challenging “because swimming is not just physical, but mental.”

“Jeff has goals in mind for each of us individually that when he first tells us we think are completely out of the ballpark and unreachable, but I think through the years with him we have learned to trust him and trust ourselves and know that we can actually do it,” said senior women’s captain Rachel Walega.

With Jeff Heistand being their head coach for only half of the seniors’ collegiate swimming career, it’s clear they have gained a lot from his coaching.

“The team atmosphere has become more serious. We still have fun but we are much more goal-oriented,” says senior men’s captain Jason Harder.

Coach Heistand is different from previous coaches the team members have had.

Hartzel explains, “He’s a lot more focused on adding in weight training and he’s very good at all the strokes, he has a good focus on all of them.”

The swim team’s training is very well-rounded, between conditioning workouts outside of the water and an important focus on developing good technique in all the strokes, each swimmer is becoming more diverse in their skills.

Heistand believes in his team as well as in the work that he must put in for the team to be able to achieve.

“Swimming is a great sport because it’s a skill sport and hard work is the great equalizer and that is one of the reasons why I feel like we can win the conference, because I’m willing to work hard,” he said.

The McDaniel College swim team is not only about being strong athletes. When talking to the freshman on the team, they all described the strength of the team as being closeness between teammates.

“The team is more or less like a family,” answered freshman Andrew Widmann.

Coach Jeff Heistand also used the word “unity” to describe the relationship between the men’s and women’s team. The team bond outside of the pool is also great motivation for the team during training.

“When you are training with people that are doing that same work that you’re doing and finding success, you begin to believe in yourself and it’s contagious,” said Heistand.

The biggest problem the team has is numbers. With 18 spaces available to both the men’s and women’s team at champs, point scoring is falling short without all the spaces filled. Recruitment is a huge factor in this, and the team has become much more involved with recruits since Heistand became head coach.

“There are still some things that are somewhat bothersome, take for instance student tours [where] the pool is not part of the tour. If we were taken seriously it would be [part of the tour],” explains Heistand.

With some support from the McDaniel College community it is apparent that the sky could be the limit for this swim team.

Green Terror Athletes of the Week: