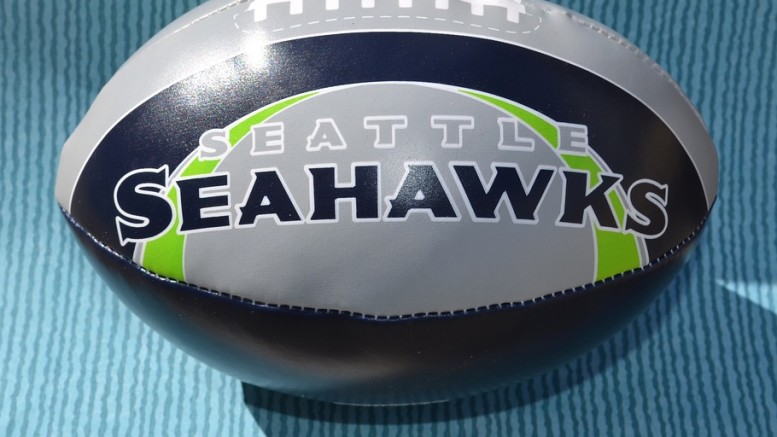 Because Roger Goodell and all the NFL team owners refuse to negotiate with the NFL Referees Association, it has come to replacement referees that often have been brought up from Division III college football leagues or high school football leagues.  Because the NFL refuses to negotiate, it has come to a game being stolen from a team that had every right to win the game.  Because the NFL refuses to negotiate, an honorable and competitive team sport is now left in the shambles of chaos depicted in the conclusion of Monday Night’s Football Game.

With only seven seconds left, Seattle quarterback Russell Wilson avoided pressure and threw a last-ditch Hail Mary in wide receiver Golden Tate’s direction.  Four Packers defensive players jumped up for the ball.  Even with Tate illegally pushing safety M.D. Jennings, Jennings still out leaped Tate to catch and control the ball, making it an interception as he came down with the ball.

That should have been the call right?  Interception?  Packers win?

In fact, just because Tate had one hand around Jennings and an elbow, as shown on the replay, one referee came over and ruled it a touchdown in Tate’s favor, in Seattle’s favor.  Here’s the greatest part though . . .

A different referee comes over and rules it a touch back, meaning it is an interception and Green Bay’s win.  The referees confer and rule that it is a touchdown.  The field explodes.  Seattle celebrates.  Green Bay demands a review.  The commentators are in awe.  But even with an “official review,” the refs come up with the same answer: touchdown.

Players and coaches run onto the field; the press struggles to figure out what exactly happened.  And in protest, the Packers collectively walk off the field and into the locker room in disgust, but reserved and self-controlled disgust.

Technically an extra point needs to be kicked to end the game, so the NFL executives call into the refs and insist they call Green Bay back out for the extra point, to effectively give the stolen win to Seattle.

If I was in their position, I would have stayed in that locker room.  But as a testament to the Packer’s integrity, they come out and finish the game.

Immediately, the media explodes into a firestorm.  The stolen call, replacement refs, and Roger Goodell dominate all of the trends on Twitter.  Over thirty ESPN analysts join SportsCenter and angrily protest the call, lament what it means for the NFL and the Packers, and insist that action must be taken.

After the game, Trent Dilfer, one of the many ESPN analysts that protested, stated, “Everyone should be angry because your intelligence has been insulted.  The irony is that it is the NFL that is messing this up.”?        It isn’t like this was a tough call.  It was plainly obvious that Green Bay should have won that game.

It was embarrassing.  It was despicable.  It was unprecedented.  It was painful.  ?  For anyone that thinks that it doesn’t matter because it is just a “game,” they are looking at this wrong.  Let me put this into perspective.  The NFL is not a game.  The NFL is a business run by owners and league officials and worked by players and coaches.  It makes a profit.  A business must be held accountable for its actions.  It needs to be held accountable for its actions last night.

This isn’t even taking into account the Las Vegas NFL betting industry that has been widely affected by this incident.  It is much harder to maintain credibility that games are not “controlled” when thousands and even millions of dollars rides—not just on the skill of players—but on the decisions of home team hired replacement referees.

On the incident, Packers quarterback Aaron Rodgers held his cool and so did Head Coach Mike McCarthy.  They both refused to criticize the refs.

The only thing that McCarthy said was this: “I have never seen anything like that in my time in football.”

If only I had their self-control.

If you think that this isn’t true.  Let’s look at other examples from around the world of sports.

When the Major League Baseball steroids controversy reached its height with Jose Canseco, former MVP of 1996, releasing a tell-all book titled Juiced, that not only exposed himself as a steroid user, but also other major baseball players such as Mark McGwire and Sammy Sosa, what was the result?  Fans immediately lost trust in the players and the game.  There was a huge outcry and media backlash against the league and the players indicted.

It wasn’t an issue that died out quickly either, but continued for years into the present.  It was just a few months ago that the 2012 MLB National League MVP Ryan Braun tested positive for steroids; the backlash and loss of trust continued.

I used to not think the NFL would be consumed with the same travesty but I was wrong.

This outrage extends past the NFL now.

Basketball player LeBron James tweeted last night after the game: “I simply just LOVE the NFL to[o] much to see these mistakes.  I’m sick like I just played for the Packers.”

Stephen A. Smith, an analyst for ESPN, tweeted, “IF the NFL wants to maintain any credibility whatsoever, it should OVERTURN this decision IMMEDIATELY.  This game should be awarded to GB.”

The reactions have even gotten outright insulting as an account parodying San Francisco running back Frank Gore tweeted, “Yo, I love all races, but the white man is the damn devil for tonight.  Sorry, y’all, blame Roger Goodell.”

Millions of people around the world watch these games every week and give the NFL money through merchandise, ratings, advertisers, tickets, etc.  The NFL depends on us, really, to keep it going.  Why not make our voices heard?

My suggestion?  Call him.  Make your voice heard.  His phone should be ringing for the next 78 hours at the least.

I just called.  The line was busy.