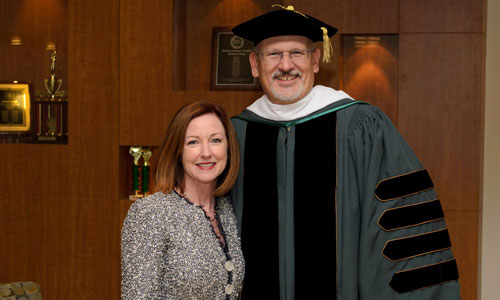 In a State of the College address on Sept. 18, 2013 at noon in The Forum, President Roger Casey spoke about the many achievements and successes that McDaniel College has had in the past year.

Casey began with an exhaustive list of the recognitions that McDaniel has received for its outstanding achievement as a liberal arts college, from the Princeton Review to the US News and World Report, attributing this success mainly to meeting all of the requirements of the Middle States reaccreditation.

“I believe the authenticity of students first and the genuine care of our faculty and staff is the first major contributor to our current success,” said Casey.

Casey cited “diversity” in revenue and admission as another achievement that makes McDaniel stand out from other liberal arts schools and contributes to the success of the college.

Revenue from the graduate program, as well as revenue from the “for-profit entity, the WMC Development Corporation” investments in the Safeway shopping center and hotel, keep many staff and faculty members employed.

Casey defined diversity in admission as “beyond issues of race and gender.” Race and socioeconomics are main aspects that are considered when assessing the diversity of McDaniel. He specifically mentioned the college’s success in supporting students receiving federal Pell Grants.

“The single achievement of this past year in which I have the greatest pride is when The New America Foundation named McDaniel one of the top 18 colleges in the country when it comes to financial support for students who are Pell eligible,” he said proudly.

Casey boasted the plethora of achievements seen of McDaniel students, athletes, alumni, faculty, and staff. With a sense of pride, he spoke highly of the third of the college’s student body that made it on the Dean’s list in the spring of 2013 and even compared McDaniel to Harvard.

Casey discussed future plans for the development of McDaniel, such as phase III of North Village, a continuation of the new signage campaign on and around campus, possible expansions on Gill Center athletic complex, and renovations to the theater.

Wrapping up his speech, Casey took a look back on his inauguration at McDaniel three years ago.

“I…realized that in less than three years we have already achieved a number of initiatives I articulated therein,” he said. “We ought to feel good about what we have done.”

1 Comment on "President Casey’s State of the College Address"