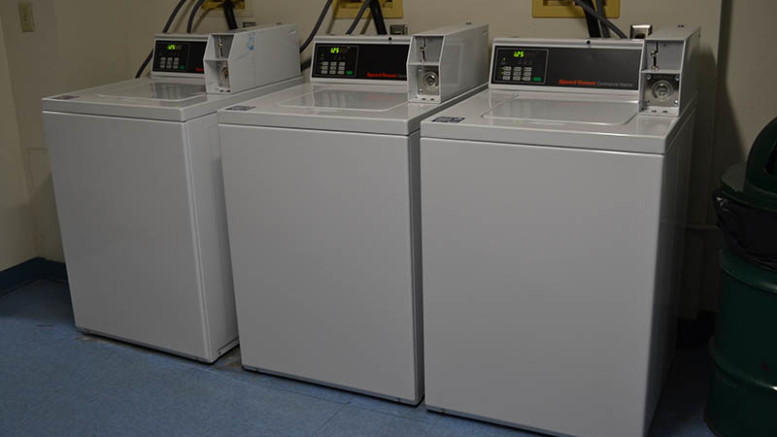 The new washers and dryers are operated via an app, though students can still use quarters to pay for laundry. (Marya Kuratova / McDaniel Free Press).

Ahead of the start of the fall semester, the Office of Residence Life announced the installation of new washers and dryers on campus, powered by Speed Queen.

The idea to start the system came from Res Life, who thought that the change would help students know which laundry machines are open and which are not so that they don’t have to lug a heavy laundry bag down the steps just to walk back up them again. Along with that thought, the system would alert students when their laundry is nearly finished so that they won’t forget about it and leave their laundry in for hours.

Perhaps most exciting for students, the new laundry service automatically provides each student with three loads of wash and three loads of dry per week for the semester, which equates to about $90. Students can still use quarters if they choose, and they can add more money to their account within the app.

While this system shows promise, some things that are new may have some difficulties that are unforeseen. With the app malfunctioning on the week of Sept. 1, seven work orders that were put in within the first week and a half of classes, and the flooding earlier in August, there were many things that were out of both Res Life’s and Conference and Auxiliary Services’ control.

In the first week and a half of the semester, four of the work orders were for North Village, one was for Gardens, one was for Rouzer Hall, and one was for Whiteford Hall. Some common problems included leaking washers, machines taking payment without starting, and dark screens not communicating alerts.

“Since the system is brand spanking new, we’re just finding out about the good and bad,” said Mary Jo Colbert, the director of Conference and Auxiliary Services.

One thing that Colbert hopes can fix the situation is that students report any problems to both the app and their RA. The problem automatically goes through Speed Queen and their partner in providing appliances, Gregory and Caldwell. However, if the RA doesn’t know about the problem, it doesn’t get through to Conference Services, which leads to miscommunications between them and G&C regarding work order issues.

If students want to report a problem themselves, they can e-mail Mary Jo Colbert at mcolbert@mcdaniel.edu.

Marya Kuratova contributed to this article.