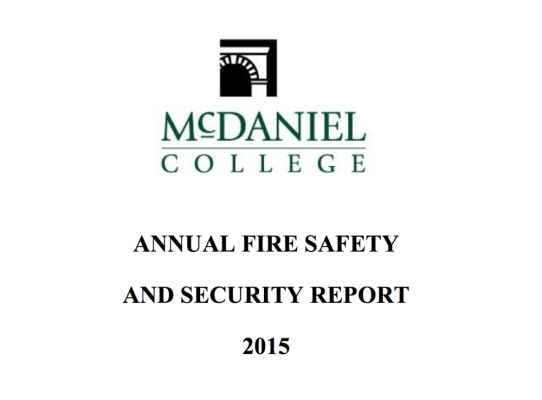 The Annual Fire Safety and Security Report published by the college recently detailed the criminal actions that had taken place on campus in 2014. These statistics, provided in accordance with federal law and the Clery Act, include crimes ranging from various forms of sexual assault to motor vehicle theft.

Larceny and property destruction related incidents saw notable increases from previous years. There were two reported motor vehicle thefts in 2014 (as opposed to one the past two years); two reported robberies (compared to zero the past two years) and two reported cases of Arson, which was up from zero in 2014, but down from the recent high of four in 2012. Aggravated assault rates also increased, with one occurring.

In accordance with changes with Sexual Assault reporting, as implemented in October of 2014 (but utilized on 2013’s report), a number of new incidents the school is required to report, and all showed an increase across the board. Three cases of dating violence, one case of domestic violence and two cases of stalking were reported, all up from zero cases the year before.

Three cases of rape were also reported, and one case of fondling.

The most notable and potentially worrisome increases, however, came in the area of alcohol and drug violations, where statistics had in some cases risen substantially. The statistics for these offences are split into two categories: those that resulted in arrest, and those that only resulted in school disciplinary action.

In regards to arrests, there were thirty-two arrests for drug abuse violations, up from twenty the year before. Alcohol arrests dropped a small bit from three in 2013 to two in 2014.

School disciplinary actions saw similar increases, with incidents regarding liquor law jumping from 139 in 2013 to 204 in 2014. Drug abuse violations dropped slightly from six in 2013 to four in 2014.

Some of the changes in these statistics can be chalked up to the notable incidents of the previous school year, such as the robbery of a Vocelli’s delivery employee and the fondling that occurred around homecoming. However others, such as the large increase in alcohol related disciplinary action, are without an easy explanation.

The Full Report can be found here: http://www.mcdaniel.edu/uploads/docs/CleryReport2015.pdf