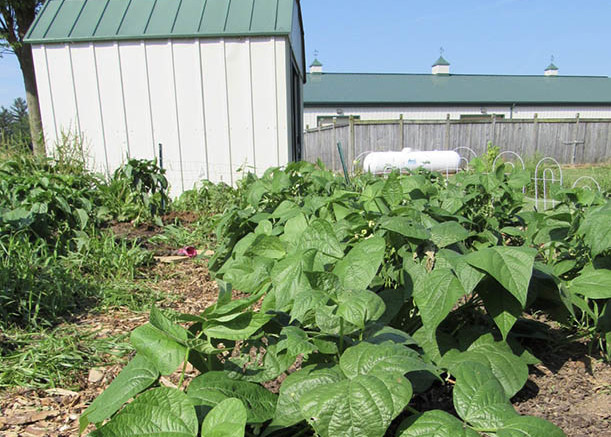 The Green Terror garden, McDaniel’s own organic, student-run plot, stands proudly tucked behind North Village. Although it is slowing down as the growing season comes to an end, the garden was in a lively full bloom over the summer.

The Green Terror garden plot sat unused for years, but was brought back to life last October. Elly Engle, Ph.D., was asked to help give the garden some much needed care after it had been left neglected for so long when she became part of the environmental studies department last fall.

“Everyone told me not to expect much when we hosted a weed pulling day last October, but it was heartwarming to see so many students come out on a Saturday morning just to pull some weeds,” Engle said.

In addition to being a pilot-program for the upcoming Singleton-Matthews farm, Engle utilized the garden primarily for her sustainable agriculture course. The class intended to create a pickle and pollinator patch for growing vegetables that could be canned, such as cucumbers.

This summer, the garden produced 18 pounds of tomatoes, 15 pounds of yellow onions, 12 pounds of hot peppers, (including 540 jalapeño peppers), and so much more, totaling about $410 equivalent in fresh produce that was dispersed around campus.

The garden also features flowers such as marigolds and zinnias that simultaneously invite pollinators and work as pest defense.

“Even if the flowers die, they’ll come back later. They attract bees and butterflies,” Gunnar Ward, student researcher for the garden, said.

Since the garden is student-run and completely organic, there has definitely been a fair number of obstacles.

“We can’t spray the bugs, so we have to squish them by hand,” Engle said.

In addition to braving the bugs and a plethora of weeds, groundhogs were a huge problem in the garden this summer.

“The groundhog was very aggravating. We do not have the funds to build a fence to keep the groundhog out,” Emma Findeisen, student researcher for the garden, said. “We did not get a chance to harvest any watermelon or cucumbers because the groundhog decimated those plants.”

This year’s harvest from the garden went to the Home on the Hill Charity Fund, students and professors on campus over the summer, a few pesky groundhogs, and AVI Foodsystems, which was able to use nine full grocery bags of basil in the dining hall earlier this semester.

Despite the struggles, everyone involved in the garden is selflessly dedicated to providing fresh foods for others.

“There is a lot of pride in growing it, but only if someone gets to enjoy the fruits of your labor,” Ward said.

“I really believe in making the world a better place, and if this garden makes a difference in a handful of people’s lives, then all the hard work has paid off,” Findeisen added.

As for Engle, she is also grateful for the opportunity.

“One of the best parts was watching Emma and Gunnar grow, not just the plants, but as people, too,” Engle said. “It has been a really great learning tool. We’ll see what next year brings.”

Students interested in getting involved can participate in the garden clean-out on Oct. 26.