Both as a response to recent crimes near campus and due to plans made earlier in the school year, the Department of Campus Safety and the McDaniel College administration sponsored an event on Tuesday, Oct. 22 titled “Active Shooter 411,” a program designed to educate students about safety and response to a situation in which someone armed with a weapon were present and dangerous on campus. The program included a video outlining the safety techniques and precautions that everyone must follow in the event of such a situation, and it was then followed up by a summary by Mike Webster, head of Campus Safety, as well as questions from the audience. 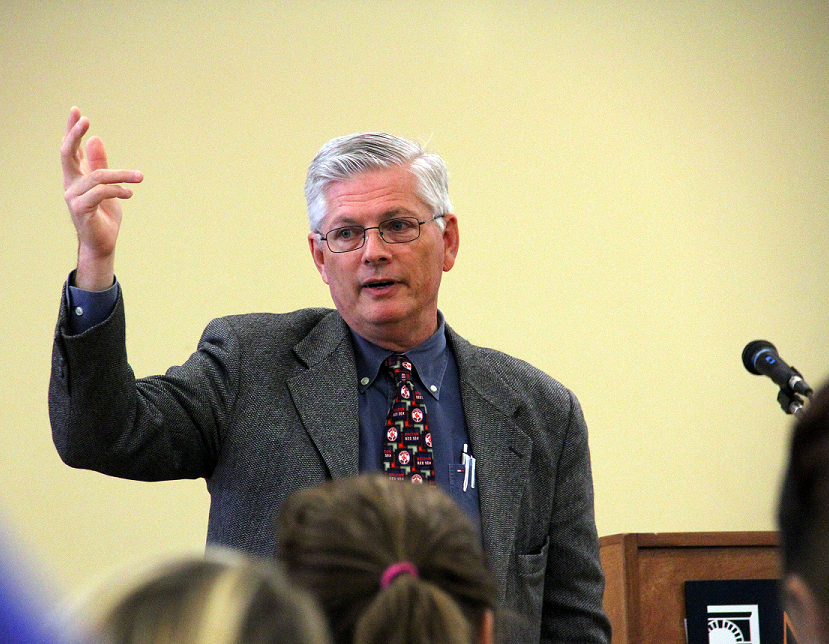 Mike Webster, Director of Campus Safety, instructs students on appropriate protocol during an assault by an active shooter.

The video presented the acronym “ESCAPE,” standing for the essential steps in responding to an active shooter on campus. These steps are:

1) Evacuate: get yourself out of any harm and into a safe location

2) Summon help: Once you are safe, contact police and/or Campus Safety via telephone. Be sure to give as much information as possible so that the dispatcher can understand the situation and know the location of what is happening.

3) Conceal yourself: if you are unable to get out of the situation, hide yourself and remain completely silent and out of sight of the shooter(s).

4) Act now: do not panic, hesitate or become immobile. Act immediately. That is, barricade doors, hide yourself, protect those around you and do whatever else is necessary as soon as you recognize what is happening.

5) Prevent entry: do your best to keep any attackers out of the room or area that you are in, so as to protect yourself and those around you. Tables, chairs and even binders can be used to keep the door shut and prevent others from getting in.

6) Exert effort: As a last case scenario, everyone should be prepared to fight an attacker should he or she be unable to do any of the previous steps. Though difficult, it is essential.

After the video Mike Webster clarified many of the points made and added his own words. He said that because ESCAPE is long and probably difficult to remember in a stressful situation, three words should be in everyone’s brain in a situation such as this: run, hide and fight. He also noted that when speaking to 911 or Campus Safety on the phone it is extremely important to stay on the line until told to hang up so that the person on the line can get enough information. After hanging up, phones should be completely silent. Even vibrate mode can be heard by a shooter and should the dispatcher call back, the phone should be on silent so that no one hears it.

Webster made it clear that in school shootings across the country, many of the disturbing images that survivors remember are those of police officers arriving at the scene and stepping over people in need. He said that it is important to remember that the police’s number one priority is to find and stop the shooter from continuing to attack, even if that means having to move past civilians in need.

He also described in detail the most recent security threat from this past weekend. Last Saturday night, students were notified of a 6-foot tall African-American male with a 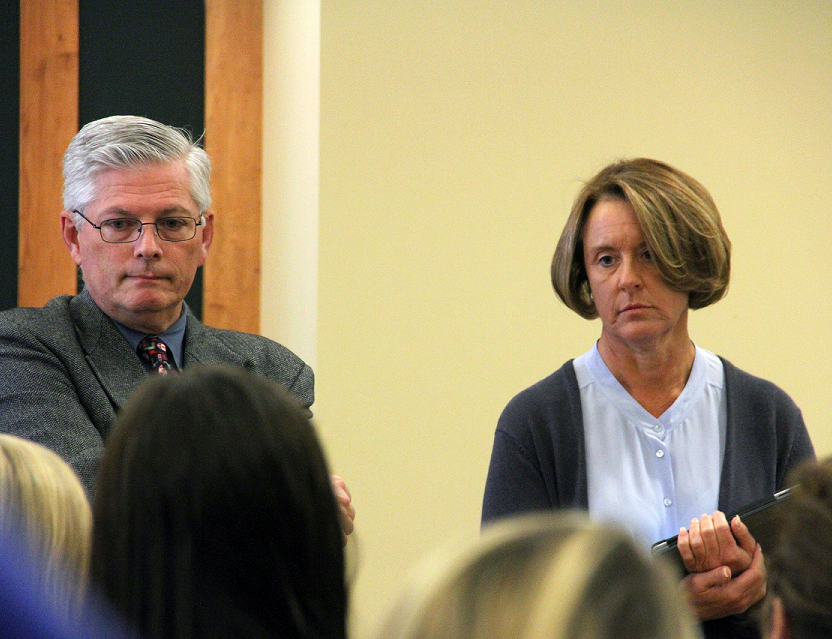 Director of Campus Safety, Mike Webster, and Vice President Beth Gerl listen patiently to students with questions at the Campus 411

square face and light facial hair who had, according to a number of student reports, been suspiciously following them and even showing a knife and demanding money on Pennsylvania Avenue near the old Mustangs Pizza. Although Campus Safety and the Westminster Police Department searched for the man and investigated this incident, he is still at large and students should be aware.

Lastly, Webster made clear that should a student ever feel unsafe in any situation on or around campus he or she should contact Campus Safety immediately. Officers are

also available to transport students around should they feel threatened or unsafe.

Vice President and Dean Beth Gerl, along with Webster, concluded the presentation by stating how important it is to be registered with the Campus Alert system. As

McDaniel students have seen in the past few weeks, this system goes out in the event of an emergency and it is imperative to not only get these notification via email but through cell phones as well. Students can do this through the McDaniel Portal system or by contacting Campus Safety for help.

After the presentation, Dean Gerl noted that this same presentation was given to McDaniel’s first-year student population during orientation this past August and that the administration felt it was important to do the same for the rest of the student body. Webster said one of Campus Safety’s main goals right now is getting more students signed up to receive text notifications from McDaniel Alert, the system the college uses to notify students of security threats on or near campus.

“We’ve got to get at least 50% in the McDaniel Alert system,” noted Webster. “Your generation is always on Facebook, so we’ll be going through that as well.”

When asked about how students should feel contacting Campus Safety if they have been drinking, Webster said that safety is the number one concern. Regardless of whether someone has been consuming alcohol, if a student is not safe they should contact Campus Safety. If a student has been drinking, they should always be at a point where they can assess a situation intelligently and respond appropriately.

To sign up for McDaniel Alert or log in and change your notification settings, please use the link below:
https://my.mcdaniel.edu/studentresources/docs/Pages/McDaniel-Alert.aspx

A Push Towards Solar Energy at McDaniel