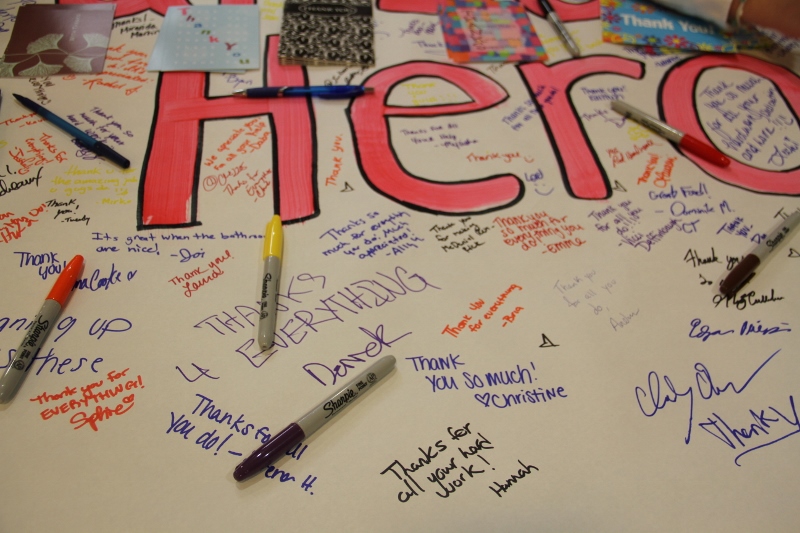 First-year student Nicole Hill was walking out of Whiteford one morning for 6 a.m. practice when she found the dorm’s entrance littered with a disgusting amount of trash.

When she came back from lunch, all the trash was gone and a worker was cleaning up around the area. Hill thanked the worker for what he was doing. He seemed surprised.

“I really appreciate that,” he said, “because no one has ever said thank you to me before.”

From this interaction, Hill realized just how little students recognize the hard work that goes on around campus. From cleaning up the massive amounts of snow over the past winter to cleaning your bathroom every morning, campus workers often fade into the background without acknowledgement from students, and their work is taken for granted.

Hill wants to change this. 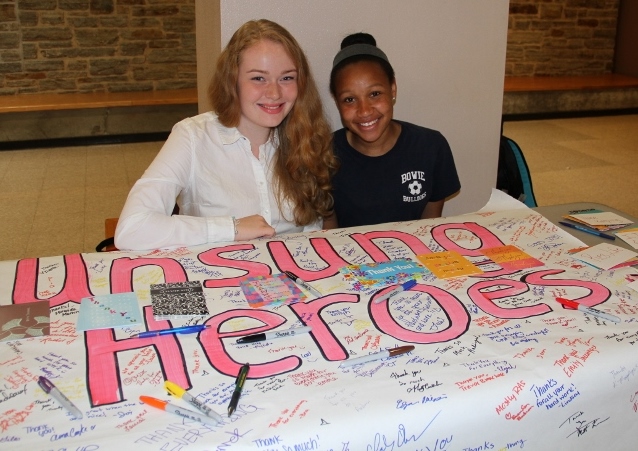 First year students Nicole Hill (right) and Alyona Skovorodnikova help collect signatures to thank McDaniel staff members. Hill started Appreciation Week, to be held the week of April 21, as a way of thanking staff members and to bring awareness to all the hard work staff members do.

“Saying thank you is simple,” Hill said. “It’s so simple.”

Hill loves the McDaniel community because of students’ consideration and the campus’s family-oriented, home-like atmosphere, but she believes there are some areas for improvement. She offers the community a chance to give back to those who make life on campus easier for everyone during Appreciation Week, which begins on Monday, April 21 and runs throughout the week.

Hill calls Appreciation Week a “God-inspired plan,” stressing that the idea came to her after interactions with maintenance workers. She wants to raise awareness for the overlooked jobs that campus staff completes around McDaniel, and would love for students to show appreciation and give a simple “thank you” to workers.

A particular Biblical quote encompasses what Hill hopes to achieve with this project:

“Ask yourself what you want people to do for you, then grab the initiative and do it for them.” (Matthew 7:12 MSG)

Sophomore Roger Isom, vice president of McDaniel’s Rotaract chapter, has helped Hill bring her idea to reality. Isom believes it’s important for a community to show appreciation toward people who may not receive it collectively. He hopes there’s a lot of collaboration on campus and that it brings us together as a community.

“We take it as a great initiative for Rotaract to step out onto campus,” Isom said. “We want to work from the inside out and have [Appreciation Week] be a seed that spreads throughout campus.”

“And not just for that week,” Hill added, “but your whole time on campus.”

Kathy Edmondson, Administrative Assistant of the English Department, is just one staff member on campus who appreciates this project.

“I think it’s an awesome idea,” she said.

Edmondson tells a maintenance worker story similar to Hill’s: she sees a worker pulling recycling items out of trash cans every day, and describes him as “non-stop working.” One day she went up to him to thank him.

“I said, ‘I just want to tell you I think you’re doing a wonderful job,’” she relayed. She then told him that he is one of the hardest workers on campus and could tell that he became choked up with gratitude.

“We all work in the same place,” Edmondson said, adding that we should not forget that.

Edmondson wants to be appreciated in simple ways: thank-you notes, hugs, even an email. “It doesn’t have to be anything above that,” she said.

If you have any questions about Appreciation Week, email Nicole Hill at nmh007@mcdaniel.edu or Roger Isom at rgi001@mcdaniel.edu.