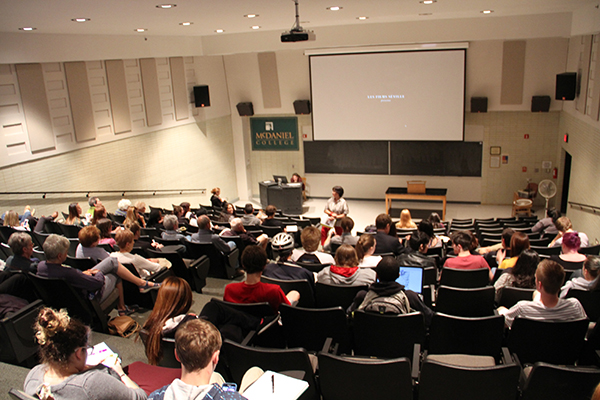 When you watch a French movie, what comes to your mind? The streets of Paris? The Eiffel Tower? Baguettes? Men with berets and striped shirts walking down the street?

If this is what comes to mind, I am afraid to tell you, mon ami, that this is not all there is to know about francophone culture. Francophone culture—that is, the cultures around the world whose main spoken language is French—encompasses more than just the typical French stereotypes. Through the aid of movies, the stereotypes are broken. Films help us understand that French culture extends beyond France. And this is the message the French Film Festival at McDaniel tries to convey to the McDaniel community.

The French Film Festival, now in its seventh year, runs for four consecutive weeks in September, showcasing a variety of French films—French in the sense of the language spoken and not so much in the culture. (But don’t worry—all the films are screened with English subtitles!) The areas and territories that the films are covering this year are France, Quebec and the French Caribbean. Thematically, this year’s festival revolves around family, cultural roots, the search for identity and the struggles one must face in finding these.

The French Film Festival serves two main purposes to the community at McDaniel: to entertain and to inform. The festival is a great opportunity for film lovers to come out and watch a movie with friends. It is also a great opportunity for those who enjoy learning about different cultures, since this festival focuses on portraying visions of the many francophone cultures around the world.

After some of the screenings, professors of various academic departments on campus moderate discussions about the films. These discussions are a good way for the McDaniel community to learn more about the movie itself and the culture it portrays. The discussions are also a merging point for different generations and age groups. Many members of the Westminster community attend the festival, and some of them even stay after the film has ended to participate in the discussions.

The French program in the Foreign Language Department at McDaniel primarily sponsors the French Film Festival. “A lot of effort goes into figuring out which movies will be screened at the festival,” said French professor and festival founder Dr. Martine Motard-Noar, who organized this year’s festival along with French professor Dr. Silvia Baage.

“The films are not chosen with a connecting theme. Rather, the theme emerges after the films have been chosen. My colleague and I try to find a variety of films that would speak to a broad audience,” said Motard-Noar.

The variety of the films can be seen in the different genres included in each festival. However, most recurrent genres are drama and animation.

“Each year, students ask whether or not there will be an animated film. The genre has become a little part of the festival,” explained Motard-Noar.

Opinions on the festival among the McDaniel community vary, but most of the opinions are positive, in spite of the fact that not all films end on a happy note.

“The films [shown] display that not all films need to have a happy fairy tale ending that resolves all the loose ends to be a good film,” remarked first year student Dylan Knoll.

According to sophomore Zoie McNeil, “Although most of the films are sad, the social issues that they bring up are important for us to understand and address.”

Although this film festival has received support and positive feedback from the McDaniel and Westminster community alike, there still exist some bumps ahead of the road. One of these bumps is financial support. Each year, the festival has been funded by the Foreign Language Department, but after each consecutive, year the organizers worry that the next year’s festival may not happen due to shortages in the budget.

“Copyright issues are a problem in this festival,” said Motard-Noar. “Some of the rights to show the films range from $250 to $500 per movie. As a small campus, it is difficult to get that amount of money each year. One of the major problems we have on campus is that, after seven years, people take this festival for granted.”

The French Film Festival is a good way for students, faculty and community members in general to be exposed to different cultures, especially to the diversity within the francophone world. If you have the opportunity to attend this festival, I would recommend attending. The final film in the series, Une bouteille à la mer (A Bottle in the Gaza Sea) will be screened on Sept. 24 at 5 p.m. in Decker Auditorium followed by a discussion led by Dr. Mohammed Esa of the Foreign Languages Department. Perhaps the experience will change your views of French culture.

4 Comments on "Oui Oui! Le français! Beyond France through the lens of a camera"